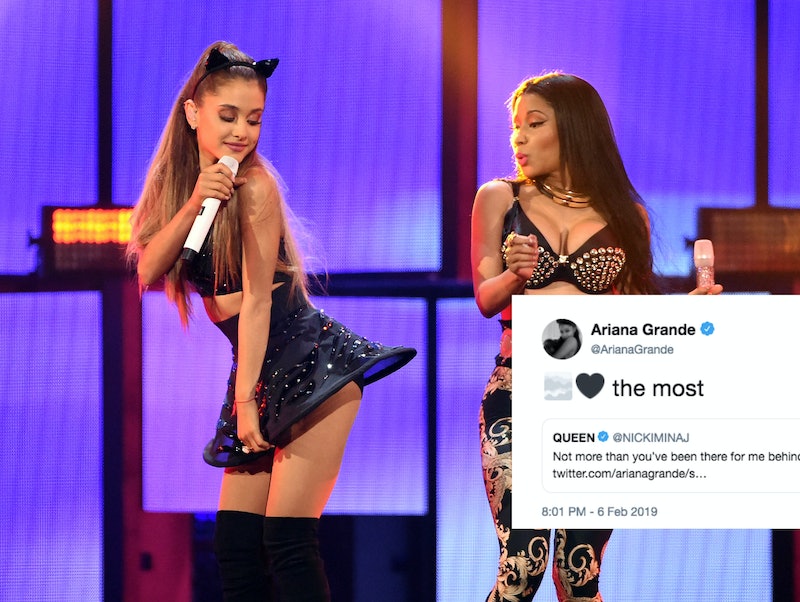 It seems like there's a new rumor about celebrities who are supposedly at each other's throats every day, but there's no truth to this one. On Wednesday night, Ariana Grande and Nicki Minaj shut down feud rumors, so if you're a fan of both of these talented women, don't worry — there's no bad blood there.

It all started when Minaj's new song, "Bust Down Barbiana," was released this week, featuring a little shoutout to the "7 Rings" singer herself. In the song, Minaj raps, "Killing everybody beat, thank you next, Ariana," which some fans thought was a diss. But no, it wasn't a diss — just reference to Grande and her hit single from last year that's still dominating the airwaves.

In fact, as soon as these rumors hit Twitter, Grande and Minaj took the opportunity to set the record straight. After a fan tweeted asking if the lyric was shade, Grande filled everyone in, reassuring her followers that there is nothing but love between her and Minaj. She wrote:

"no silly ass. there will never be anything but love between us ever. she’s been there for me (in real life) every time i’ve needed somebody & i’ll always be there for her. we love each other. bet."

And once Minaj saw Grande's sweet tweet, she responded with one of her own, writing, "Not more than you’ve been there for me behind the scenes. Love you. For life."

And as if that wasn't adorable enough, Grande replied with a black heart emoji, tweeting, "the most."

Is there ever a better way to stop rumors than to clear the air yourself? By taking that approach, Grande and Minaj were able to get a handle on their fake feud almost immediately — and they proved that there's nothing but love between them all at the same time. If that's not love, what is?

Grande and Minaj's friendship goes back years, and they've shared the stage (and the recording studio) many times throughout both of their careers. "Bang Bang," "Bed," "The Light Is Coming," — the list goes on and on. Still, feud rumors involving them both seem to come and go pretty often. The last one was in December, when Minaj shared sympathy for Pete Davidson when he spoke up about struggling with his mental illness after his breakup with Grande. But in that case, she wasn't throwing shade either, and she cleared that one up with a tweet about her love for Grande, too, calling her her sister.

And when people assumed the worst when Grande and Minaj's albums shared a release date last August? Nope, they were tight even then, so not even business can come between them.

Minaj and Grande have been friends for a long time, and it doesn't seem like that's going to change anytime soon. Go ahead — listen to "Back Down Barbiana" guilt-free while you wait for Grande's new album to drop Friday. It seems like these two wouldn't have it any other way.