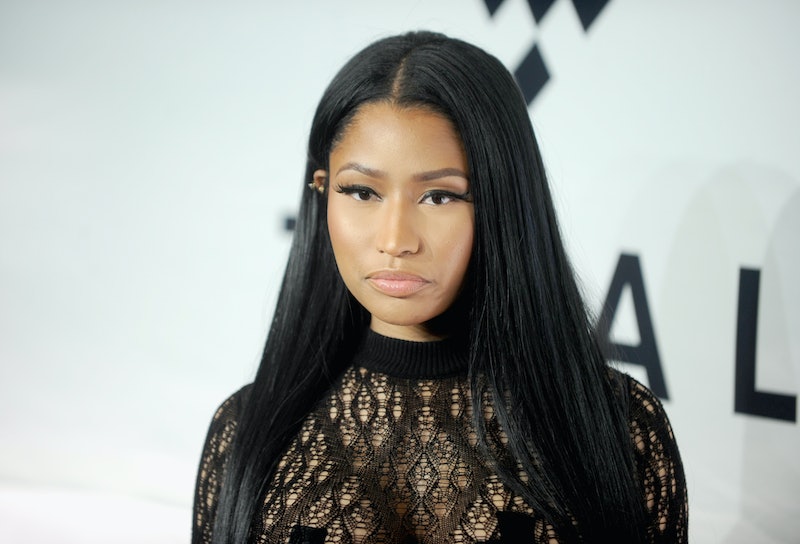 Fifty Shades Darker may be a film, but it's also a musical feast. Hot on the heels of the steamy Taylor Swift and Zayn Malik duet, we get another duet, this time from an even more unexpected musical couple. It's certainly catchy, but Nicki Minaj and Nick Jonas' "Bom Bidi Bom" lyrics go a lot deeper than that. The majority of the song is sung by Jonas and there are a whole bunch of mixed metaphors thrown in there. But by the time we get to Minaj's part, there are so many in-jokes and cultural references that you're going to want to sit and Google half of it.

If you've sat down and read through the song, you might have gotten a case of severe brow furrow unmatched by anything since you made the mistake of taking that Renaissance poetry class in high school. But, as always, I've got you. When you take it verse by verse, it's not so mysterious after all. On one level, it's about obsessive love. On another, it's about good lovin'. This makes it the perfect fit for Fifty Shades Darker, which, if you've already read the book, you'll know covers pretty similar themes. But hey, why rework perfection? There's a reason it's a bestseller.

I was wrong and you were right

If I was yours and you were mine

But it was all good

You were gone and I was back

And I was good and you were bad

But it was all good

This is a little cryptic so I'm going to hazard what is very much a guess. I'm assuming this means that Jonas and Minaj's characters were once in a relationship in which he didn't behave well ("I was wrong and you were right"), so he got inevitably dumped. As is so often the case with douchey men, this then acted as a wake-up call for him to clean up his act ("And I was good and you were bad"), and now he's lusting after his ex-girlfriend. Stay strong, Minaj.

'Cause I'm an addict, I'm your patient

Your lips are the medication

Come here baby, yeah, you know just what I want

At first, he's explicit about his obsession; he's an "addict." But then he clearly rethinks that, because drug addiction doesn't sound so alluring. "No, no way, I'm not an addict, did you think I said I'm an addict? No, I'm your patient." This line is everything: "Your lips are the medication." Please try using it on your crush at whatever Valentine's Day party you're hitting up and report back.

You give me bad bad love

But I love it baby

Love me all night long

'Cause you're a bad bad girl

But I love it baby

Love me all night long

If you want baby, yeah

Very few songs use the word "sex"; it's a little too explicit for a track you're hoping to get maximum radio airplay, right? So here I think Minaj and Jonas have opted for a whimsical term to use instead of sex, i.e. "bom bodi bom bom." If you think about it, it's basically got the word "body" in it, as well as a word that sounds a hell of a lot like "bottom" or "bomb" (like, "you're the bomb"). Anyway, they have great sex together, which, given that this song is on the Fifty Shades Darker soundtrack, isn't terribly surprising.

You be the first, I be the last

I call it good love

Every kiss and every touch

I call it good love

Again, Jonas is stressing that their sexual connection's so strong, he's a little addicted ("It's like a hit ain't enough"). When he calls it "good love", it makes me want to tell him not to be so coy. C'mon, that's not good loving, that's great loving.

He said if he can't hit my bullseye, he'd rather die

He put it on me better than any other guy

He said, he need a bad b*tch with an alibi

Yo, give me the muny, the yen and the pesos

Sext me on the beach in Turks and Caicos

I give him that work, that twerk, that slay hoes

Uh, assume the position when you see a bad one

I'm about to blow, and I ain't talking Samsung

I'm about to show him what I do with that tongue

So, according to Minaj's character, if her lover doesn't bring her to the point of orgasm ("if he can't hit my bullseye"), then he gets seriously depressed. Then there are a whole ton of Nicki Minaj references that make it seem less like she's playing a character and more like she's doing a cameo as herself.

Basically, if you're looking for a melodic song that's heavy on sex appeal to get down and dirty with that special someone to, you could do a lot worse than this track. Respect.