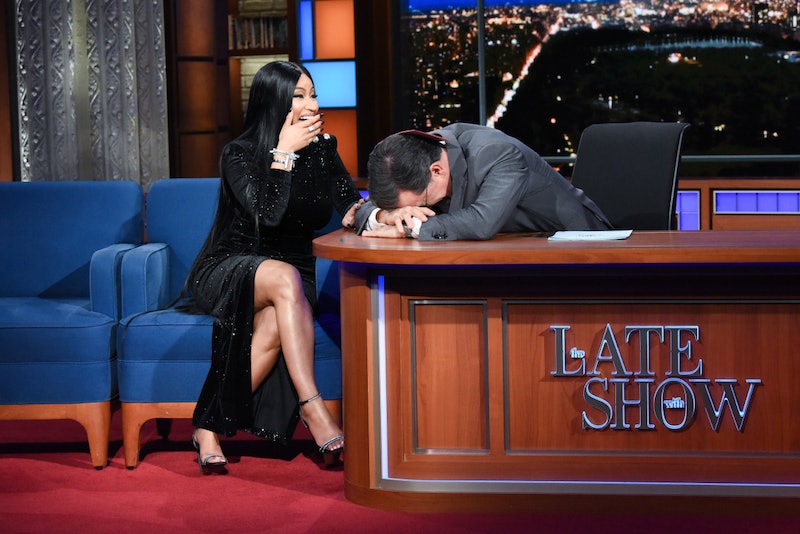 Nicki Minaj is known for a lot of things. From her well-known video for "Anaconda," which riffs off of Sir Mix-a-Lot's song, "Baby Got Back," to her even earlier hit "Super Bass," which was the true song of the summer back in 2011. But now, in the year of 2018, Nicki Minaj freestyle rapped about Stephen Colbert on his show, and this might just be one of the most iconic things she's ever done.

On Aug. 13, the rapper was a guest on The Late Show With Stephen Colbert and started off great right off the bat. She commented on how she loves Colbert's show so much and watches him all the time. He then came back, letting her know that she's fast and funny with her raps. And he most likely meant that she was hilarious in real life — something anyone who has seen an interview or viral video with her before knows is true. It was a description Minaj more than lived up to.

Later in the segment, Colbert brought up Minaj's scandalous new track "Barbie Dreams," a song off the new album Queen. In the song, Minaj name drops a long list of famous men and male rappers, weaving elaborate and often hilarious disses that are sure to ruffle a few feathers. But one name missing form the list: Stephen Colbert. "I noticed I'm not on the list of men," Colbert said. "I mean, it's pretty comprehensive. I'm just curious, if I were to make the list, how might you inform me." While Minaj was looking a little bit shy at that part, she quickly turned the tables around.

"I might f*ck Stephen after the show, he gonna come back to work with a magical glow," she rapped while banging on his desk for a beat. At this point, Colbert was speechless and couldn't stop laughing. She then continued: "But when you see us don't [bleep] stare, just address me as queen, Nicki Colbert." There was face-covering, there was fanning, and there was water drinking. After she was done, Colbert bowed and said "It's all downhill from here." And it sure was; the Late Show host could not collect himself for the following few questions, stuttering a ton of times, especially after she asked if he was married.

This wasn't the only R-rated moment of Colbert's interview with the rapper. Before the interview dissolved into a giggle fit, the two did manage to discuss Queen. Colbert even showed the cover of the album. Of course, since the interview was shown on CBS, a network channel, so her breasts were blurred out. While her actual nipples were bedazzled, CBS' policy around full breasts must be that they can't be shown at all. Colbert quipped that he believes "none of it should" be blurred, to which Minaj exclaimed, "Amen."

The rest of the interview consisted of Minaj denying that Drake reached out to her in the wake of "Barbie Dreams." Though she did admit that two men she rapped about on the track have. "Only one person so far got a little irritated, but then I explained how much I love him and he understands now." Of course, she refused to name names, but no doubt fans will be working hard to reveal the identities of these disgruntled rappers. This new mystery aside, one thing is clear: an interview with Nicki Minaj realness and a dumbfounded Stephen Colbert is one for the books.