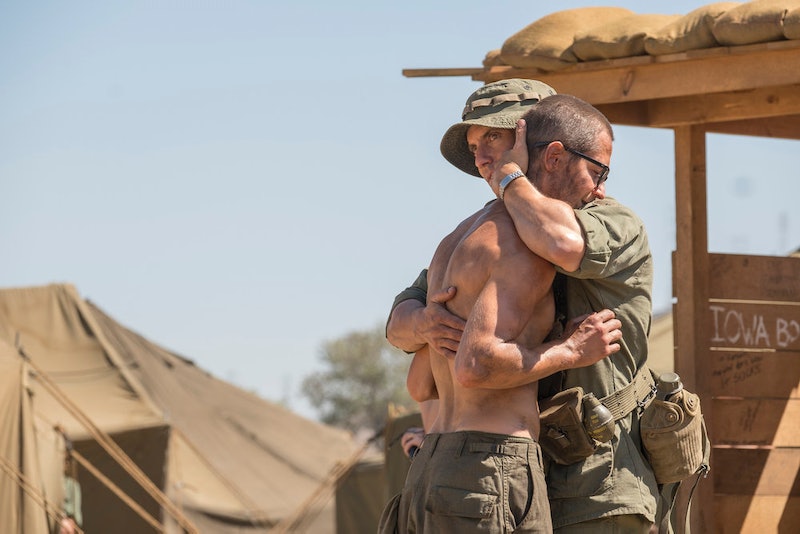 Oh, brother, was that a tough one to watch. Nicky and Jack's This Is Us reunion gutted viewers, but actor Michael Angarano, who joined the NBC family drama this season for a guest arc as Nicky Pearson, revealed in a new interview with Variety that the siblings' tense meeting almost went down quite differently. While filming scenes in which Jack (played by Milo Ventimiglia) sees his brother for the first time post-Vietnam War, Angarano described shooting several scenes in Nicky's trailer, and, in some, they “yelled at each other" and "where the characters got more upset, more emotional.”

The final cut viewers got to see in This Is Us' Jan. 22 episode titled "Songbird Road: Part One," of course, was a "quieter," much more subdued version of the once-tight brothers' first (and likely final) time seeing each other in about 20 years. “So much of the emotion is what is not said,” Angarano added to Variety. “What [Nicky’s] feeling is a lot of regret and shame and guilt, and that is something he carries with him his whole life.”

In the same episode, fans of NBC's tearjerker saw the lasting effects that living with those heavy emotions had on Nicky when the "Big 3" (AKA Randall, Kate, and Kevin Pearson) rolled up on their previously-thought-to-be-dead uncle at his rundown rural Pennsylvania trailer in the present day. Whereas This Is Us has largely dealt with aging characters in its many non-linear timelines through the magic of makeup, this time, however, Nicky (estimated to now be in his 70s) was not played by Angarano, but by actor Griffin Dunne instead. (Fun fact: Dunne, who directed 1998 favorite Practical Magic, played Angarano's onscreen father in the 2007 drama, Snow Angels.)

For Angarano, who called Dunne's casting "really, really right" in his Variety interview, there were no hard feelings:

“I think it benefits the show and the part to have an older actor playing the older version of Nicky. You’re playing a man who’s seen a lot, who’s lived a really hard life, and I think it’s really appropriate to have an actor with the appropriate amount of life experience to play the part."

That's not to say, however, that Angarano's time on the series is finished — nor does the actor want it to be. Among the areas of Nicky's past he said he'd like to explore: the post-war life of a Vietnam vet, as well as “what [Nicky's] relationship was like with Jack before all of this, when they were just two young men and probably really happy and had a lot of love for each other.”

Angarano also has a lot of love for Ventimiglia, whom he praised for his ability to authentically portray Jack at several different ages. In actuality, he was almost the only member of the Pearson family Angarano got to meet during his stint on the show, as the majority of his scenes took place in Vietnam. That all changed before he wrapped, however.

“I think it was my second to last day of shooting where I was on the Paramount lot and I see [Sterling K. Brown] walk across the basecamp," he recalled to Variety. "I was like, ‘Oh my God, that’s Sterling, I finally feel like I’m on This Is Us!'”

Hopefully, fans will have a chance to see more of Angarano as Nicky, as the emotional This Is Us roller coaster ride continues it's winding, up-and-down journey.