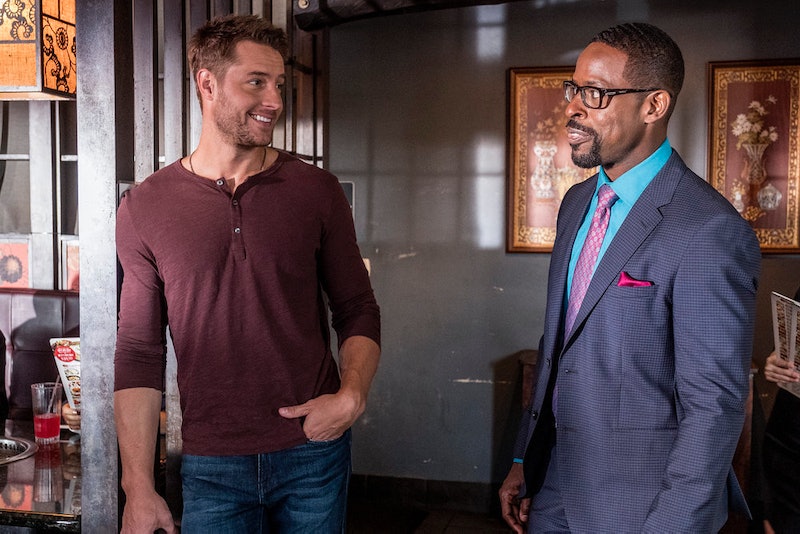 Being a dedicated This Is Us viewer is like continuously opening a Jack-in-the-box. Things get slowly cranked up, and when everything seems like it’s great, that’s when the Jack (not Pearson) pops out and the family life falls into disarray. All families have their problems, but the Pearson clan has a small monopoly on disappointment and grief. Season 3 has shown the Big 3 — Kevin, Kate, and Randall — finding their footing in new situations. These are three people that are not the best with change (especially Randall), so it’s been something to watch. And right now, things are going OK. The Big 3 on This Is Us are actually OK right now and engaging in healthy relationship behavior. People are smiling. They feel cared for. They’re selling Girl Scout cookies.

So it’s all about to blow up in our faces, right?

At the end of Season 2, This Is Us took a step back from the present to fill in some more of the gaps in the past, namely Jack’s death and some of the aftermath of his passing. It also looked to the future, with Toby severely depressed and possibly divorced from Kate; Randall as an old man talking about some mythic “her” that he must go visit; and Kevin in Vietnam trying to trace the footsteps his father took during the war of the same name.

Season 3 is a mix of it all, seeing as we can’t understand what lies ahead for the Big 3 if we don’t understand the now. There’s a lot of bad stuff happening to the Pearsons now, and yet they all seem to be making the most of their happiness. Let’s take a look at what could happen next.

Kate is pregnant (hooray!), and she’s finally learning the big secret of parenthood — no one has any idea what they’re doing. They just try to do their best and make the right decisions for their families, or so Rebecca tells her when she asks her for advice for the umpteenth time. And in that decision-making, Kate got Toby, who is in the midst of a deep, deep depression, out of the house for the first time in weeks for a walk. As Kate said, she’s needed to be taken care of her whole life, so it’s time she does that for everyone else. Except it will be a lot harder to have a baby with a husband who can’t get out of bed, and as we saw in the future, Toby isn’t wearing a wedding ring. Could these two be headed for Splitsville?

Beth lost her job but Randall is too busy trying to become a politician to hear her. He’s not really listening to his potential constituents either, and it’s just one more issue of the Randall Doesn’t Belong Quarterly. Beth is used to holding Randall up, but she finally asserts herself and tells him that no, she’s not OK with being fired.

She’s having a hard time, so can he pay attention? Randall hears that now, but the future is up for debate. “There’ll be some difficulty between them regarding their marriage,” Sterling K. Brown, who plays Randall, recently told TVLine. It’s worth noting that Beth isn’t in the flash-forward Randall is in. Oh god, is Beth gone, too?

Raise your hand if you think Kevin is headed for a heartbreak? Beth warned about Zoe and her flighty ways, but Kevin is in L-U-V with this documentarian, and let’s face it — Kevin is needy. Zoe is very independent. His neediness transformed into asking Zoe to go to Vietnam with him, which is more of a big step for Zoe (the saying yes, at least) than it is for Kevin. As he told Randall, he has problems with boundaries, so Kevin may end up smothering Zoe before he has a chance to let her fall in love with him. Hold on loosely, Kevin, even in Vietnam. And, really, can we picture Zoe in the Pearson B-team text group with Miguel, Toby, and Beth?

Nothing gold can stay, and nothing joyful can persevere on This Is Us. Let’s hope the happiness lasts for as long as possible.