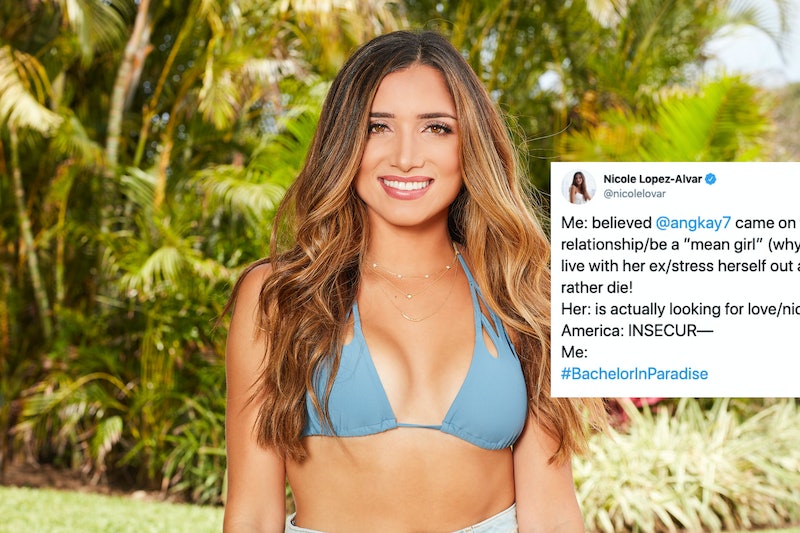 Bachelor in Paradise Season 6 may be full of drama, but one of the contestants is regretting their participation in some of the more dramatic parts in the show. On Twitter, Nicole apologized to Angela from Bachelor in Paradise and recognized that she misjudged the fellow contestant at first.

Nicole Lopez-Alvar wrote a lengthy, and pretty hilarious, thread about her time on Paradise. More specifically, she wrote about her drama with Clay Harbor's ex, Angela Amezcua. And not only did she address some of her negative comments from the show, but she also took a very mature stance by apologizing profusely for saying those aforementioned statements.

In case you haven't been following along with this season of the ABC staple, Angela recently appeared on the series, which caused a bit of a shake-up on the Paradise beach. On the show, Nicole could be heard criticizing Angela to her friends and in her "in the moment" interview segments, which caused some on Twitter to voice their displeasure over her negative statements.

As she wrote in her Sept. 4 thread, "Me: believed @angkay7 came on the show to sabotage relationship/be a 'mean girl' (why else would she want to live with her ex/stress herself out after wedding)? I’d rather die!" She then continued to write that Angela was nothing but a lovely person, despite what she may have said on the show, "Her: is actually looking for love/nice/means well/classy." The whole situation, caused Nicole to change her tune, as showcased by her choice of GIF.

She continued to write on Twitter that she was in the wrong regarding her original view of Angela and that, as a result of the entire matter, she'd maybe need to "apply to grad school. Delete social media entirely. Change my name. And that’s the tweet!"

But, that still wasn't all she had to say about the matter. She continued to write a very self-aware apology to Angela and wish her nothing but the best,

"My phone just died (shocker), but in conclusion: I’m sorry, @angkay7! I literally thought you were out to ruin my life, I couldn’t have been more wrong. You deserve nothing but the best, and you’re beyond perf in many ways. Can’t wait for the rest of our Paradise adventures."

As for how Angela feels about all of this business, she fully accepted Nicole's apology. In response to her Twitter thread, Angela wrote that she's down to let bygones be bygones, as she wrote, "Thanks girl, I appreciate it!" Nicole, in turn, responded with a sweet kiss emoji along with a slew of hearts.

So, in summation, this whole Paradise drama ended in just about the classiest and most mature way possible. And it's so nice to see that the two contestants can officially put this negative chapter in their stories behind them. Now that the matter is over (both on the show and post-BiP), it's clear that both of the women can move on and, just as Nicole said, simply enjoy watching the rest of their Bachelor in Paradise adventures.