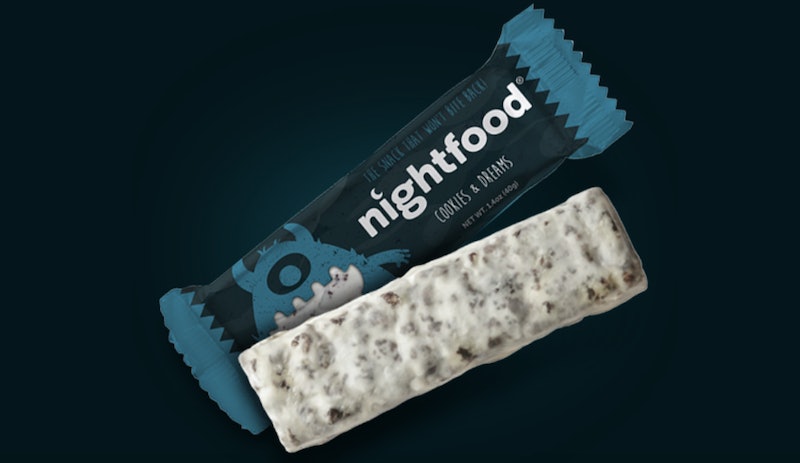 I like to do this thing where I go into the kitchen late at night and take a spoon to the quart of fudge chocolate chip ice cream in the freezer. Once I feel myself scraping the bottom of the container, I get back in bed and stare at the ceiling for the next four hours. Nighttime snacks are all fun and games until you can't go back to sleep. That's where Nightfood comes in. Nightfood is a midnight snack that won't disrupt your sleep cycle, but if you're hankering for something sweet and delicious, it'll get the job done.

Here's the problem with eating chocolate late at night. Cocoa beans naturally contain caffeine, so chocolate has the potential to give you a little kick, depending on what kind and how much you consume. For instance, Health.com says chowing down on a bar of dark chocolate could mean consuming the same amount of caffeine as a can of pop. Suffice to say, this is prooobably a bad idea if you plan on trying to sleep after.

What happens, though, when those late-night cravings hit you full force and chocolate is nonnegotiable? This is how snack bar line Nightfood can help.

The team behind the sweet snack bars worked with food scientists and sleep experts to formulate a treat that ideally won't disrupt your sleep cycle. The snacks are made with Chocamine, a cocoa-based ingredient that gives you all the best of chocolate without the drawbacks, says RFI Ingredients, a natural ingredients manufacturer.

According to RFI Ingredients, this means you still get the magical taste and smell of chocolate but not the energy kick from caffeine — because it doesn't have any. Instead, Chocamine contains theobromine, a different type of stimulant. Don't liken it to caffeine, though. A study published in Frontiers in Pharmacology says theobromine causes fewer of the unwanted effects that caffeine does. Information shared on Pub Chem's Open Chemistry Database elaborates on this further, saying theobromine has almost no stimulant effect on the central nervous system. Rather, it's a mild and longer lasting stimulant and mood booster, as opposed to that quick spike caffeine gives you.

Since Nightfood is made with the theobromine-containing Chocamine, you can indulge without worrying about the caffeine high afterward. The snack bars come in Cookies N' Dreams (clever!) and Midnight Chocolate Crunch.

If you need something to eat but chocolate doesn't sound appetizing, there are plenty of other foods that will help you sleep better.

For instance, pretzels are a kind of carbohydrate that break down quickly and have a higher glycemic ranking, says Reader's Digest. One study from the University of Sydney found a link between this type of food and an increase in tryptophan — which helps induce sleepiness. Rice is another example of a sleepy time food, for the same reasons.

Not feeling carby? Try hummus instead. According to Alternative Daily, chickpeas (the main ingredient in hummus) contain vitamin B6. One study published in Georgian Medical News using rats found B6 might encourage the production of melatonin — a hormone that helps us sleep, says Sleep.org. Your body's melatonin levels should naturally rise as bedtime approaches, but having a snack that can give it a little kick in the tush might mean a more peaceful slumber.

Heck yeah. I love finishing off a tub of roasted red pepper hummus right before bed. Combine that with my favorite salty pita chips, and I should sleep like a baby.

Your body follows a natural sleep cycle that tells you when it's time to be alert and awake and when it's time to peace out for the night. Listen to it and give it a nudge with the right foods, and you should get plenty of beauty sleep.