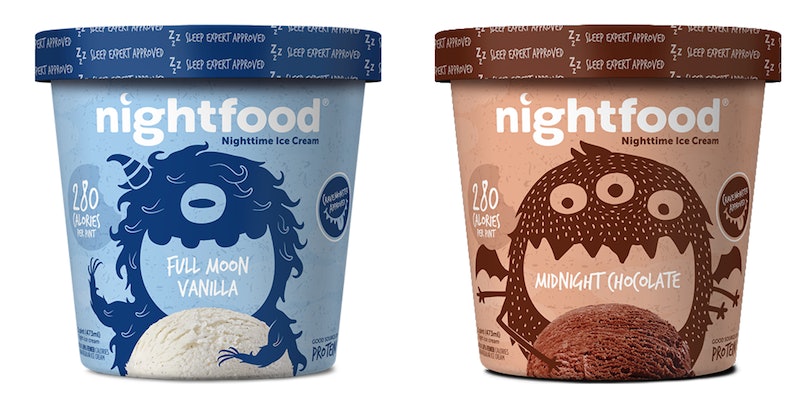 If your favorite after-dinner treat is ice cream, but you sometimes find it difficult to sleep if you eat certain things in the evening, good news: There’s a new ice cream that’s actually sleep-friendly. Called Nightfood, it won’t necessarily help you sleep — but it will make it easier to sleep following a scoop than it would be if you had regular ice cream instead. Isn't science great?

Formulated with the help of sleep expert Dr. Michael Breus and Dr. Lauren Broch and and Dr. Michael Grandner, who both have expertise in sleep and nutrition, Nightfood was first introduced in the fall of 2018. At the time, all we knew was that the launch was coming sometime in 2019 — and now, it’s finally here. In fact, it won the 2019 Product of the Year award from consumer research firm Kantar. It currently comes in eight flavors — Full Moon Vanilla, Midnight Chocolate, After Dinner Mint Chip, Cold Brew Decaf, Cookies n’ Dreams, Milk and Cookie Dough, Cherry Eclipse, and Bed and Breakfast — and is available for purchase online.

But what exactly is Nightfood (other than, y'know, ice cream)? Well, what it isn’t is a sleep aid. As founder Sean Folkson told Fast Company in December, the goal for Nightfood isn’t “about, like, dropping an Ambien or some sleep aid into the product,” but rather about “making ice cream in a way that’s less disruptive” to the sleep cycle.

That’s a fair point; typically, ice cream is full of things that can, in fact, disrupt your sleep. Some ice cream flavors can have caffeine in them, even if you don’t realize it — chocolate, for example (here’s your reminder that chocolate is caffeinated) — which can keep you up. Plus, consuming sugar throughout the day, including at night, has been linked with poor sleep, according to one study — and most ice creams tend to have a lot of sugar in them (it is a dessert after all). All of that is fine and of itself; eat what you want, when you want. But if you often have trouble sleeping, ice cream is one of the foods you might want to steer clear of before bed, purely to avoid making falling and staying asleep harder on yourself than it already is.

That said, there are foods that can help make it easier to sleep, too. As the National Sleep Foundation notes, some foods are naturally rich in the hormone melatonin, which helps regulate the sleep/wake cycle; these foods include almonds, walnuts, and tart cherries. Foods that are high in protein can also be good choices, according to Healthline, due to the tryptophan many of them have — tryptophan being an amino acid that can help out with serotonin production. (There’s also some evidence that too much protein might be bad news, though, as it can be difficult to digest and might therefore make it harder for you to sleep.)

Nightfood’s FAQ says that its creators have attempted to make the ice cream sleep-friendly by “[removing/minimizing] stuff that’s in most other ice creams that be sleep disruptive,” like caffeine and sugars, and formulated the recipes so they’re “less likely to cause sleep disruption via lactose digestion issues, acid reflux, [and] blood sugar spikes.” The recipe also added in “certain minerals and amino acids that research suggests can support sleep quality.”

Per the ingredients lists for each flavor found on Nightfood’s website, the “Nightfood mineral blend” contains magnesium citrate, calcium citrate, and zinc citrate — all of which have, in fact, been found to aid sleep in peer-reviewed research. A 2012 study, for example, found that magnesium supplements can help improve subjective measures of insomnia in older people; a 2009 study found both calcium and magnesium to be effective in helping people fall and stay asleep; and a 2017 study found that zinc might be involved in regulating sleep, as well as that supplements can improve both the amount and quality of sleep we get.

Additionally, the flavors’ actual… uh… flavor comes from sleep-friendly ingredients. The chocolate-based options, for example, use Chocamine rather than regular chocolate; Chocamine is cocoa-based, but caffeine-free. The coffee flavor is decaf (although it’s worth remembering that even decaffeinated coffee contains a small amount of caffeine). And one of the flavors — Cherry Eclipse — makes good use of the fact that tart cherries are an excellent source of melatonin.

So: Does Nightfood work? Well, it’s not going to literally knock you out, but it certainly might be less disruptive to your sleep than regular ice cream can be. So, if you enjoy a treat in the evening, it might be worth giving a shot. Pints are $5.99 at Nightfood’s online shop; note, though, that shipping is expensive (it requires coolers, dry ice, and special handling), so you’re best off ordering in bulk — it’s $19 flat when you order eight pints or more, as opposed to $30 to $35 for fewer than eight.