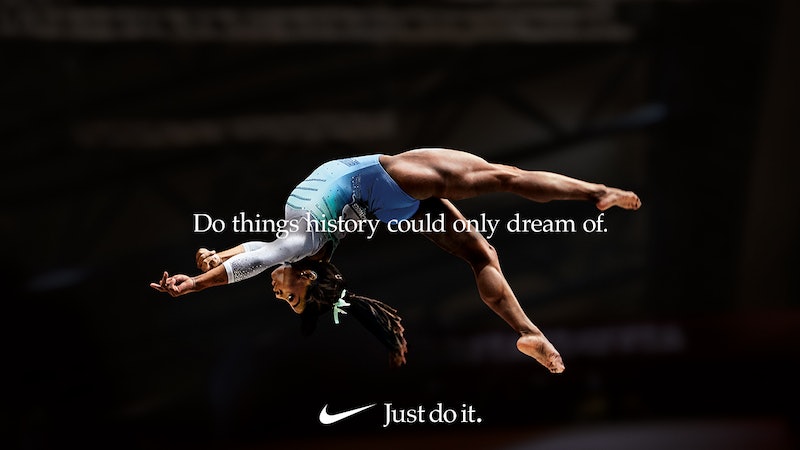 While Sunday night's Academy Awards were all about the nominees and winners, Nike also made a splash during the ceremony by debuting a new ad featuring some of the top female athletes out there. The Nike commercial, titled "Dream Crazier," is narrated by Serena Williams, and features gymnast Simone Biles, snowboarder Chloe Kim, fencer Ibtihaj Muhammad, and members of the U.S. Women's National Soccer Team, among others.

In the ad, Williams' narration begins, "If we show emotion, we’re called dramatic. If we want to play against men, we’re nuts. And if we dream of equal opportunity, delusional," while clips of various women athletes are shown.

While Williams can probably relate to pretty much everything in the commercial, she then says a line that directly corresponds with a recent moment in her career: "If we get angry, we’re hysterical, irrational, or just being crazy." During the 2018 U.S. Open, Williams was issued three code violations, including for breaking her racket and expressing her frustration to the umpire. Williams believed that the umpire treated her differently because she's a woman and that a man who got angry wouldn't have been penalized in the same way.

The message in the new ad is about taking ownership of the word "crazy," and using it to define one's dreams and show people what you can do. Williams lists things that were deemed "crazy," like a woman running a marathon, coaching an NBA team, and dunking a basketball. Or, "winning 23 grand slams, having a baby, and then coming back for more." (Hey! Who did that?) She concludes, "So if they want to call you crazy, fine. Show them what crazy can do."

While there are plenty of famous faces in the commercial, some of the athletes are lesser known or up-and-coming. There's Sky Brown, a 10-year-old skateboarder, who was the youngest athlete to compete at the 2016 Vans US Open, and 13-year-old Olivia Moultrie, who, according to Nike, was "the first girl in the history of the U.S. Soccer Development Academy to compete full-time against boys." Other women featured include boxer Marlen Esparza, Paralympian Tatyana McFadden, and swimmer Simone Manuel.

"Dream Crazier" is the follow-up to a September 2018 ad, "Dream Crazy", narrated by Colin Kaepernick. Like the new commercial, it's all about inspiring people to dream big, but without a specific focus on women. In the ad Kaepernick says things like, "Don't settle for homecoming queen or linebacker. Do both," and "Don't become the best basketball player on the planet. Be bigger than basketball." He finishes the ad, "So don't ask if your dreams are crazy. Ask if they're crazy enough."

Nike's "Just Do It" slogan recently turned 30, and both commercials are in support of that campaign and aim to show what "Just Do It" looks like in today's world. Nike is also inviting customers to share their dreams on its site: "Tell us the motivation behind your crazy dream, and join a community of dreamers just like you. We’ll bring you inspirational stories, first access to products, rewards, and the chance to have Nike showcase your crazy dream." The site also has a search option for "Community Impact" programs for people who want to get involved in helping girls achieve their goals. Point is, Nike wants you to "Just Do It"... whatever "it" is for you.