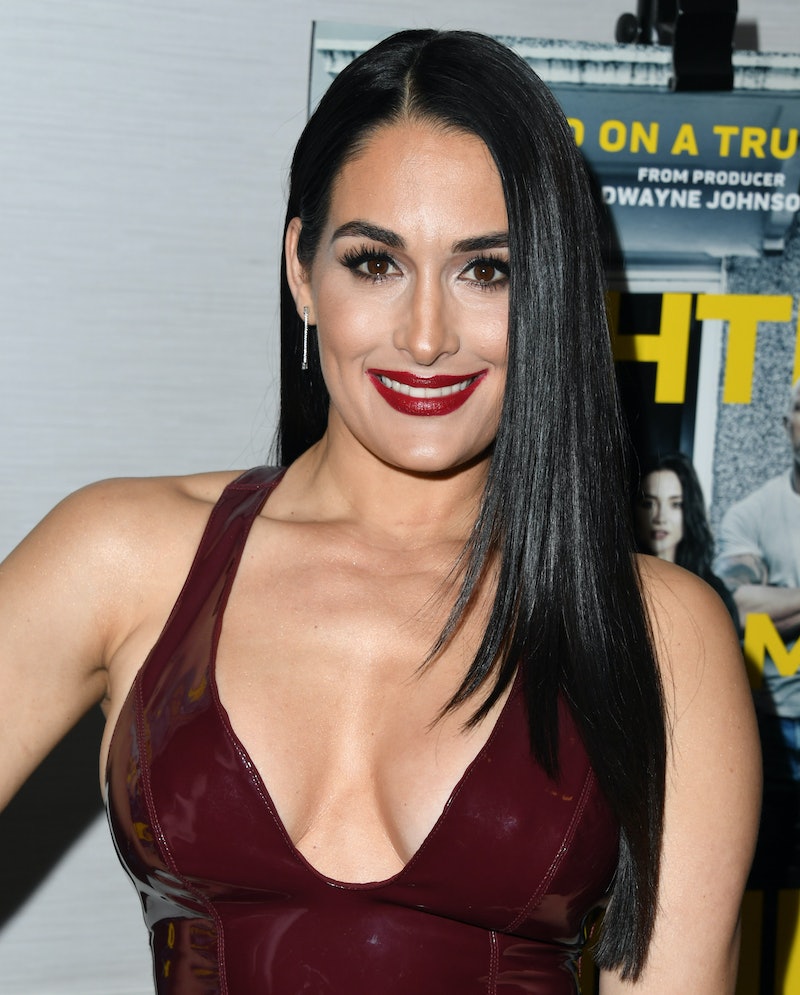 After sharing her relationship with John Cena on two popular reality TV shows, Nikki Bella is just as open about their breakup. A lot of celebrities simply release a statement when the split happens and leave it at that. In contrast, she's been very transparent. On the April 10 episode of The Bellas Podcast, Nikki opened up about seeing photos of John Cena with another woman post-breakup, which led to a very honest conversation with her sister Brie Bella about how she felt about it all.

For anyone who's not familiar, Cena was photographed with a woman named Shay Shariatzadeh in Vancouver, Canada back in March, according to E! News. Since the details were already out there, Nikki decided to address the elephant in the room on her podcast. According to People, she admitted, "This is actually kind of hard to talk about." And then Nikki got much more direct: "I’m just going to come out and say it. You all have seen John’s paparazzi pics."

The reality TV star shared, "He was spotted with a new mystery woman and everyone has been blowing up my phone, trying to get to my PR to get my reaction. Everyone wants to know what I’ve been thinking and I haven’t said anything yet, so let me just put it out there." Explaining her perspective to fans directly is the best call, especially since they're so invested in her personal life.

Nikki admitted that her "it was weird" when she first heard that her ex was spotted with someone else. However, she insisted that her reaction really wasn't too severe. She explained,

"You know sometimes when you get a text, or you see a photo, or you see your significant other flirt with someone, you get those knots in your stomach and it hurts? Like you either want to poop your pants immediately … or you just have the craziest tummy-ache. Neither of that happened to me when I saw the photo."

Brie concurred, "That says a lot." She reiterated, "If you didn’t want to sh*t your pants, then that means you weren’t affected." A very vivid, yet logical metaphor.

Then Nikki explained why she had empathy for her ex during their public split, which was shown through her perspective on both Total Bellas and on Total Divas. She confessed, "I felt bad for John. I felt bad because I felt like I embarrassed him, I felt like I disappointed him, and I have to live with a lot of that stuff and it’s been tough."

Those feelings are actually what made her happy to see those pictures of him with someone else. Nikki shared, "I felt happy for him. I am very happy for him." She said it's "because of how sad I made him and how much I felt like I hurt him, when I saw the big smile on his face with the paparazzi photos"

She insisted, "As long as John is happy, I’m happy." After such a drawn-out breakup, they're super amicable exes. She even claimed that she's protective and will take action if he gets hurt. Nikki declared, "Let me tell you, she breaks his heart? I will rack-attack her in a heartbeat. Still protective of that man."

Aside from wanting happiness for her ex, the reason the photos didn't really phase Nikki was because she wasn't too surprised. She already knew that he was back on the dating scene. The Total Divas alum revealed, "He and I have talked about it. Maybe that’s why it didn’t hurt me." She even joked, “I knew he was dating someone, so I was actually just really curious to see who he was going on dinner dates with, which you know they’ll never be like ours. Just kidding. Sorry, that’s the girl in me! Let me get back to being a woman."

That includes moving on in her own right. Nikki confirmed a romance with Artem Chigvintsev, a Dancing With the Stars pro, in March. He appeared at the end of the Total Bellas season finale on March 24 and in a cute selfie on Nikki's Instagram page that same night.

Even though it may be tough for some fans to see the former couple moving on, they seem to be very supportive of each other. If these exes can handle seeing photos with new love interests, fans need to accept them as well.