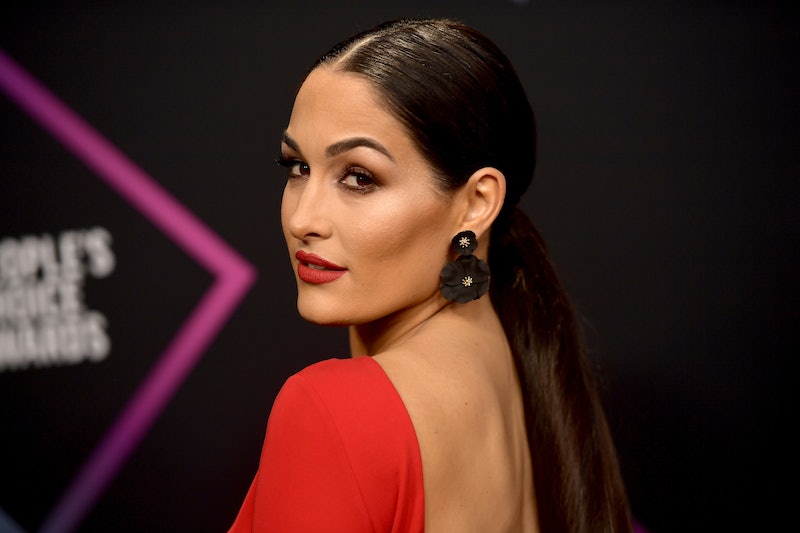 Dating is tough enough as it is. Imagine getting back into the game after sharing a relationship on reality television. Now, think about going on a date with someone else in the same position. Total Bellas star Nikki Bella recently spilled on her date with Peter Kraus from The Bachelorette. Unfortunately for them, it wasn't the ideal reality TV crossover that they (or their fans) had hoped for. The WWE star described their interaction as "awkward" during Tuesday's episode of Busy Tonight.

As it turns out, Nikki's twin sister Brie Bella is the one who set up the date, which was filmed for their show Total Bellas. Discussing the experience with host Busy Philipps, Nikki began,

"That was like my first like, just, like first date in what, over six to seven years. It was so awkward and I totally got drunk."

Nikki even insisted, "I didn’t even really want to flirt because it just was so awkward." However, Brie chimed in, "No, but you flirted because I watched the footage back, but it was really bad. I’m like my sister needs help on dating, she’s not a good dater." At least she's trying her best!

In Nikki's defense, it really has been a long time since her last first date. It's great that she's putting herself out there. She just got out of a (very public) six-year relationship with John Cena. They initially broke up in April 2018. However, they gave their relationship another shot before ultimately splitting in July 2018.

During the Busy Tonight interview, Nikki confessed, "When we watched it back I got so bright red, I couldn’t watch it. I was so embarrassed of myself."

Interestingly enough, Peter made a similar comment during a November 2018 interview with Us Weekly. He said, "I'm turning red," in addition to remarking about Nikki that "she's beautiful." As awkward as the date might have been, at least they're on the same (bright red) page — if only they were able to connect on more beyond their blushing.

Even though it wasn't the ideal first date, it does seem like it's all good between the two reality TV stars these days. On Feb. 6, the WWE star left a nice comment on the Bachelorette alum's Instagram selfie.

Nikki stated the obvious when she commented, "Aww cute!" Peter even responded with an old school winking face instead of an emoji.

In a sneak peek from the episode, Brie mentions setting up Nikki with the Bachelorette alum and gets a very enthusiastic reaction from their mom Kathy Colace who yells out, "Whoa, yeah!" This is not surprising since TMZ reported that the family matriarch is actually a major fan of the Bachelor franchise. Then again, who isn't?

It doesn't seem like there's much hope for a romance between these two, but fans will have to check that out for themselves by watching the actual footage. The Total Bellas episode with Nikki and Peter's first date will air on Sunday, Feb. 24 on E!. Maybe they downplayed how great it is... or maybe it really was that awkward. Is it Sunday night yet?

More like this
Gabby & Rachel Reveal How That 'Bachelorette' Rose Ceremony Twist Happened
By Grace Wehniainen
Everything To Know About 'Bachelor' Host Jesse Palmer
By Justice Namaste and Radhika Menon
Former 'Bachelor' Producer Elan Gale Knows The Secret To Your Favorite Shows
By Samantha Rollins
Why Did Meatball Leave 'The Bachelorette'? His Second Chance Didn’t Last Too Long
By Grace Wehniainen
Get Even More From Bustle — Sign Up For The Newsletter