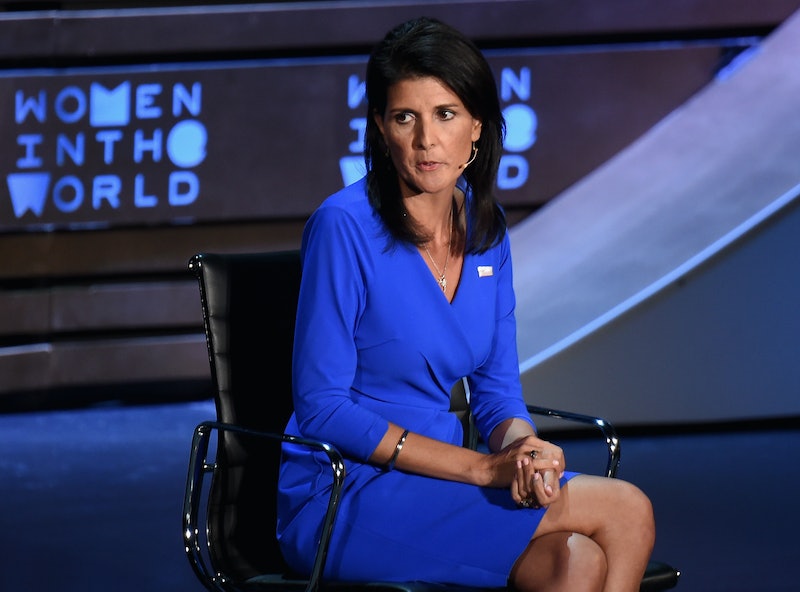 Nikki Haley's reception at the Women in the World Summit was far from diplomatic. Tweets from audience members give you an idea of the disdain she faced during her interview with MSNBC's Greta Van Susteren Wednesday night — "1st time I've heard straight up heckling from crowd in 8 yrs. Nikki Haley getting asked to leave," one audience member wrote. But even worse was America's top diplomat at the U.N. ignoring one of the biggest ways we could help Syria's suffering population. At one point, Haley responded to a question about Syrian refugees from the audience with total silence.

Things started to go south earlier in the interview between Haley and the audience. She acknowledged the role that Russia has in the Syrian civil war, given the fact that some 70 Syrians were killed and 100 more injured in a chemical weapons attack at dawn on Tuesday morning. Trump denounced the attack and blamed both the Syrian government and President Obama — but not Russia. The tense moments began as Van Susteren pointed that out.

"President Trump has of course been critical of what's going on in Syria, of Assad, and of President Obama ... But we have not heard much from him about Russia," Van Susteren said, asking, "Why?" The crowd went wild, clapping and cheering.

First she said that she's hard on Russia, implying the same goes for Trump, and then Haley said this bit:

Everyone wants to look at his words, but look at his actions. The two things that Russia doesn’t want to see the U.S. do is strengthen their military and expand energy. And the president has done both of those.

The crowd literally booed, something that Twitter users said has never happened before. Audience members even yelled about going to the next panel. But that was not the worst part. Forward the video to 15:19.

Haley says, "We are always the moral conscious of the world." And without a beat someone in the crowd yelled, "What about refugees?" Haley went silent and then Van Susteren changed the topic, saying "Ummm... anyway, moving that along." No response at all to the biggest thing we could to help refugees.

That would seem extremely ironic given Haley's general thoughts on the matter. Earlier Wednesday, Haley herself took the issue to the UN Security Council and showed photos of children and babies who were killed in the attack and asked her fellow council members to do something to stop the carnage. She even suggested the United States could increasingly use military power to put an end to the ongoing civil war in Syria, something she would echo later in her speech. She also specifically blamed Russia, much as she would Wednesday night.

Whether any of this will change U.S. policy depends on Trump. Haley can say all the right things, and it still won't matter if Trump refuses to pin it on Russia. On Wednesday he used even harsher language against the Assad regime saying that his attitude to the Syrian president "has changed very much." But unlike Haley, he did not specifically call out Russia.

Until Trump does, Haley should expect a similar reception as a member of his administration. But even so, ignoring a question about refugees is unacceptable.