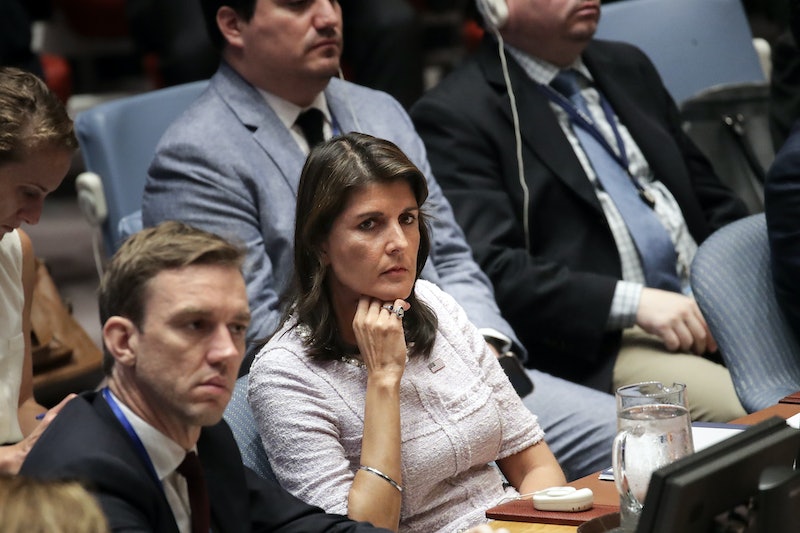 It looks as though departing the UN has hit a snag for one former ambassador — losing more than a million Twitter followers. After she stepped down from her post at the end of 2018, Nikki Haley's official Twitter account was shut down in accordance with a State Department policy implemented by the Obama administration.

As per the State Department's Foreign Affairs Manual, political appointees have to retire their official government Twitter accounts after they leave office. The rule was established to prevent government officials from using their titles to amass a huge following — Haley's official Twitter had 1.67 million followers — and then continue to benefit from that following once they move on to the private sector.

Haley started a new, personal account (@NikkiHaley) in December. On Tuesday she publicized the change, tweeting, "Due to State Dept rules that were changed by the outgoing administration, I have had to clear my personal Twitter account that I have had for years. The followers, the history, the pictures, and all other content. Please refollow and retweet this to your friends. Here’s to 2019!"

As of Wednesday night, Haley's personal account had already gained 259,000 followers. Haley's account during her time as UN Ambassador (@AmbNikkiHaley) is still available on Twitter as a State Department digital archive.

According to CNN, most White House officials were caught off guard by the announcement, which came just four weeks before the midterm elections. Haley's rationale for leaving after less than two years on the job has also remained somewhat vague. In October, she called serving as ambassador the "honor of a lifetime," according to CNN, adding, "There's no personal reason. It's very important for government officials to understand when it's time to step aside."

Haley also shut down any speculation that she might be running to unseat President Trump in 2020, telling reporters, unprompted, in October, "No, I am not running for 2020."

"I can promise you what I'll be doing is campaigning for this one," she added, referring to President Trump, per CNN.

Haley's legacy at the UN is a mix of upholding traditional American viewpoints — for instance, delivering a consistent message on U.S. sanctions in Russia — and supporting the president's more isolationist perspective. Over the summer, Haley withdrew the United States from the UN Human Rights Council and cut U.S. funding from the UN Relief and Works Agency, which aids Palestinian refugees.

More like this
Michigan’s Governor Is “Going To Fight Like Hell” To Protect Abortion Access
By Andrea Zelinski
How To Fight For Reproductive Rights, Based On How Much Time You Have
By Courtney Young
LGBT+ Men Fleeing Afghanistan Were Denied Asylum By The Home Office, New Findings Show
By Sam Ramsden
Why Can’t I Go Live On Instagram?
By Emma Carey
Get Even More From Bustle — Sign Up For The Newsletter