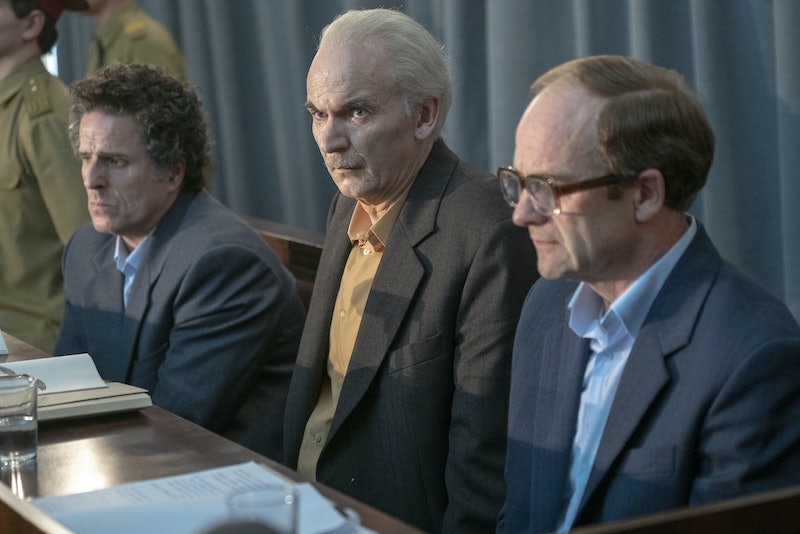 The events of HBO's Chernobyl are rooted in the historic 1986 disaster, in which a Soviet nuclear reactor exploded, contaminated the surrounding area beyond repair, and led to the deaths of thousands. It does take its share of creative liberties, but many of Chernobyl's characters have real-life counterparts who played huge roles in the series of events. For example, Nikolai M. Fomin was a real person, and his character will be on trial in this week's finale.

Fomin was the chief engineer at Chernobyl, and after the disaster, he was found guilty of "gross violation of safety regulations, creating conditions that led to an explosion," the New York Times reported in 1987. Along with Viktor Bryukhanov, plant director, and Anatoly Dyatlov, his deputy chief engineer, Fomin was sentenced to 10 years in a labor camp for his part in the circumstances that led to the explosion.

The Associated Press reports that Fomin was a trained electrician, and was around the age of 50 when the accident happened. According to AmericanScientist.org, he attempted suicide in the wake of the disaster, which delayed the trial, and Newsweek reports that he endured another suicide attempt and nervous breakdown following his sentencing. Fomin was eventually released early because of it.

There doesn't seem to be much information on what happened to Fomin following his release, but given his exposure to the toxic area during his onsite visits, it wouldn't be surprising if he encountered more health issues later in his life. Slate reports that a rare form of thyroid cancer skyrocketed after the Chernobyl disaster sent radioactive material into air across Europe. Greenpeace International reported in 2006 that Chernobyl may, in total, become responsible for "nearly 100,000 fatal cancers."

Though Fomin, Dyatlov and Bryukhanov were found legally responsible for the Chernobyl disaster, along with a few lower level officials, there's still some controversy over how much of the disaster was solely their fault. The World Nuclear Association blames both "flawed reactor design" and "inadequately trained personnel" for the explosion.

Nowadays, the affected part of Chernobyl power plant is enclosed in concrete, though the World Nuclear Organization reports that "the structure is neither strong nor durable." And the actions of Fomin and his colleagues still linger — who knows how much more quickly people may have been evacuated to safety had the higher-ups of the plant been more realistic and immediate with their decisions.

Because that's what HBO's Chernobyl really is — a story about people affected by tragedy. "We know why the Titanic sank. How is it possible that we don’t why Chernobyl exploded?" creator Craig Mazin told Collider of why he wanted to tell the story. "While the story of the explosion is fascinating, and we make it really clear exactly why and how it happened, what really grabbed me and held me were the incredible stories of the human beings who lived through it, and who suffered and sacrificed to save the people that they loved, to save their countrymen and to save a continent, and continued to do so, against odds that were startling and kept getting worse."

Though Fomin's fate is unclear, his team's work at Chernobyl remains a cautionary tale of how drastically things can go wrong at the hands of a negligent staff.