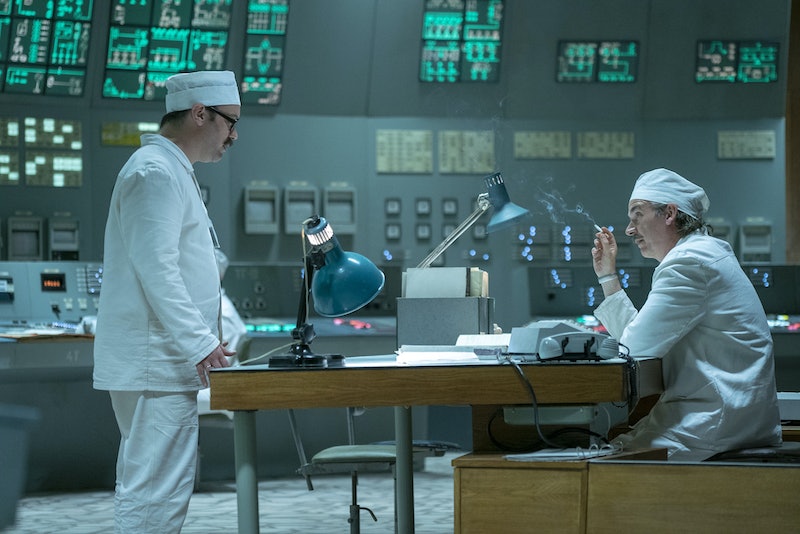 As anyone who has watched HBO's Chernobyl miniseries will know by now, the question of who to blame for the 1986 nuclear accident is a murky one. Monday night marks the final installment of the five-part series, which provides a dramatized version of the real-life events, and viewers will finally get a taste of the subsequent court proceedings and legal action. It's difficult to say how much closure that will offer, given that the effects of the Chernobyl disaster are still felt today, but it will hopefully answer the question of who was responsible for Chernobyl, at least in the eyes of the law.

According to New York Times coverage, after a three-week trial, the head of the Chernobyl plant and two of his aids received the maximum possible punishment. Viktor P. Bryukhanov, plant director, Nikolai M. Fomin, chief engineer, and Anatoly S. Dyatlov, Fomin's deputy, were sentenced to 10 years in a labor camp after being found guilty of "gross violation of safety regulations, creating conditions that led to an explosion," the Times reports. Three other officials served lesser sentences, the article states, but the law found Bryukhanov, Fomin and Dyatlov to shoulder the bulk of the responsibility.

The Chernobyl reactor explosion forced mass evacuation, and spread an unimaginable amount of radioactive particles across Europe, making much of the surrounding area uninhabitable for centuries to come. Even aside from the immediate casualties due to the blast, the effects of citizens' exposure to toxic particles eventually killed an estimated tens of thousands.

Dyatlov is played in Chernobyl by Paul Ritter, seen above, and is one of the more infuriating figures viewers meet just moments after the explosion. Though the workers he supervises insist that something is drastically wrong with the reactor, Dyatlov's character is in deep denial, and brushes off their concerns. He instead sends them into the depths of the facility to remedy a problem that is gravely more severe than he acknowledges, further exposing them to toxic environments, and even tells the higher-ups that things are under control.

The Washington Post reports that Dyatlov received an early release "as part of a general amnesty for Chernobyl officials" and served only about half of his original sentence. He told the paper after his release that he believed he and his men were used as scapegoats for a reactor that was faultily designed from the start. "If I had known then what I know now about what kind of monster this reactor was, I would never have gone to work at Chernobyl," he said. "And not only me. Nobody would have worked there."

That attitude is reminiscent of what Emily Watson's Ulana Khomyuk character suggests in last week's episode — that though plant staff were guilty of "recklessness beyond belief," they were perhaps not fully responsible for the actual explosion because they didn't know about the reactor's abnormalities.

Bryukhanov and Fomin are also found in HBO's Chernobyl, played by Con O'Neill and Adrian Rawlins, respectively. They are first seen visiting the disaster site in the scene above to speak with Stellan Skarsgard's Boris Shcherbina, and like Dyatlov, are keen to downplay the severity of the situation at hand. The show even depicts Bryukhanov reporting to the government that the reactor is still intact long after he should've known that it wasn't the case, delaying more swift & appropriate action.

According to Reuters, Bryukhanov also served half his 10-year sentence, and had feelings similar to Dyatlov's in terms of his responsibility for the disaster. He told Russia's Profil magazine in 2006 that scientists "covered up the full truth about the design faults" that contributed to the accident, Reuters continues.

So was it actually staff negligence, or is a faulty reactor to blame? We can never truly know if the disaster would have occurred without each of these two factors at play — the World Nuclear Association's information on the Chernobyl disaster reports that both contributed. The site states that the explosion "was the product of a flawed Soviet reactor design coupled with serious mistakes made by plant operators. It was a direct consequence of Cold War isolation and the resulting lack of any safety culture."

And so today, though the punishments for Chernobyl officials might be over, the disaster is always remembered as a cautionary tale of what can go wrong when nuclear power sources are not properly cared for, monitored, and designed.