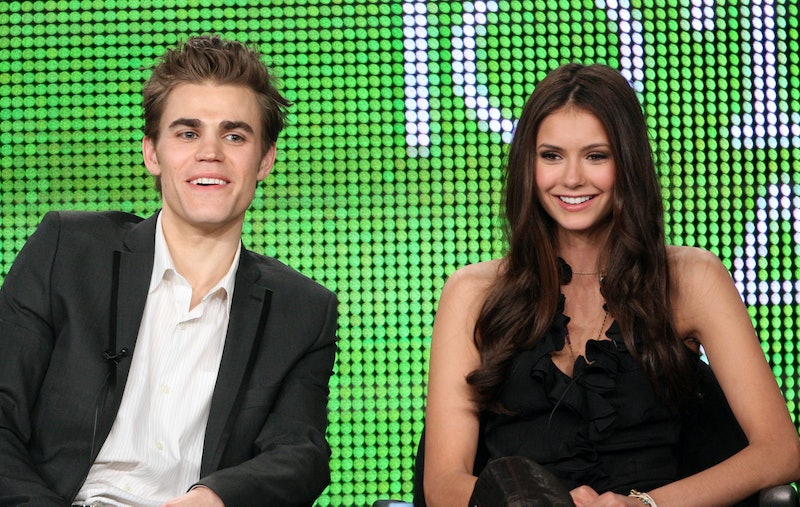 Elena Gilbert and Stefan Salvatore may have been lovers, but Nina Dobrev’s latest Vampire Diaries comments about Paul Wesley shows it wasn’t love at first sight between the two actors. According to Dobrev, the two actually “despised each other” during the first few months of filming the CW vampire drama. The actress appeared on the Monday, June 10 episode of the Directionally Challenged podcast, hosted by fellow Vampire Diaries alums Candice King and Kayla Ewell, for an in-depth discussion about her career trajectory. During that time, Dobrev reflected on the series that made her a household name, and opened up about the initial strife that existed between her and fellow co-star Wesley.

"I remember everyone would walk up to me after the show aired and they'd be like, 'Are you and Paul dating in real life?' Because everyone thought that we had such good chemistry," Dobrev said. "And we despised each other so much that it read as love. We really just didn't get along the first maybe five months of shooting."

Dobrev added, "I respected Paul Wesley [but] I didn't like Paul Wesley.” The revelation may come as a shock to Vampire Diaries fans given the pair’s onscreen chemistry in the series, which ran from 2009 to 2017. Dobrev and Wesley depicted Elena and Stefan, star-crossed human and vampire lovers residing in the supernatural-filled town of Mystic Falls. In the series, Elena ultimately ends up with Stefan’s vampire brother Damon (Ian Somerhalder). Dobrev exited the series in 2015, but her character made an appearance in the 2017 series finale.

But fret not, Elena and Stefan fans. While the two initially didn’t hit if off, Dobrev and Wesley’s friendship has since blossomed; the two are now best friends. During the podcast, Dobrev reflected on a comment Wesley made that set the tone for their friendship. “Maybe we had a moment where we actually connected, and he looked at me and he was like, ‘10 years from now, when we’re not on this show, you’re gonna really miss me. You’re gonna miss these times. You’ll look back, and this is gonna be the good old days. We'll appreciate each other in 10 years.’”

As it turns out, Wesley’s comments were spot on.

"He was so f*cking right. We ended up getting to a good place and it was fine. Of everyone, I think I probably see him the most and hang out with him the most. We’re probably the closest,” Dobrev said during the podcast. “We hang out a lot. We’re really good friends. I love his wife. It’s so funny how time changes everything because I never thought he would be one of my best friends.”

To the delight of fans, Dobrev and Wesley’s friendship is also well documented on social media. In May of last year, the two friends ran into each other during an outing in New York. Dobrev shared a selfie alongside Wesley with the caption, “Excuse me sir, you look familiar. I feel like we’ve met before. Maybe in a past life?”

A few months later in September, Wesley even surprised Dobrev at the taping of her new ABC sitcom Fam. During the final curtain call, Dobrev notices her Vampire Diaries co-star sitting in the audience and runs to him for a sweet embrace. "When your Fam comes to see you at FAM," she gushed on Instagram Story.

Aw. While Elena and Stefan may be no more, Nina and Paul's IRL friendship is certainly enough to fill the Vampire Diaries void.

More like this
Netflix Reveals First Look At Wednesday In The 'Addams Family' Spinoff Series
By Bustle Editors
24 Years Ago, 'Friends' Dropped Its Most Underrated Ross & Rachel Episode
By Grace Wehniainen
The 'Skins' Cast Shared The Reunion We’ve Been Waiting For
By Sophie McEvoy
A New 'And Just Like That' Table Read Pic Confirms A Key Character's Return
By Jack Irvin and Grace Wehniainen
Get Even More From Bustle — Sign Up For The Newsletter