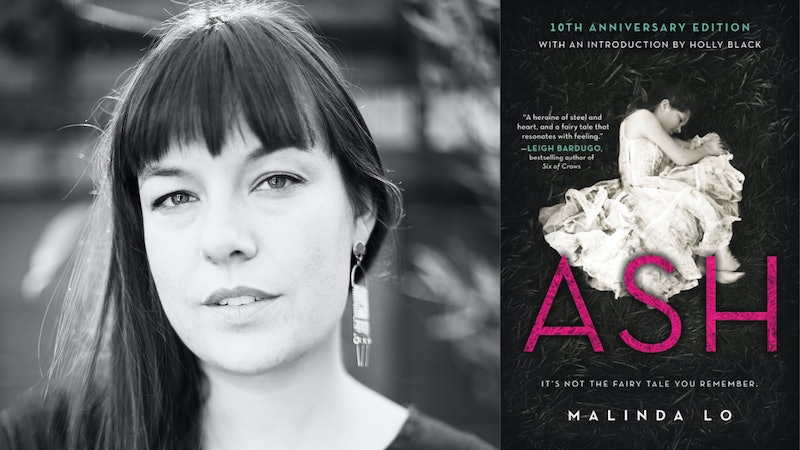 Each month, the Bustle Book Club asks an author to recommend a book they think everyone should read. In June, We Are Okay author Nina LaCour recommends Ash by Malinda Lo. Follow along with the book club on Bustle and join the conversation on Goodreads.

It's always a good time to read books by LGBTQIA+ authors, but especially during Pride Month. This month, I asked one of the most acclaimed queer writers working today — Nina LaCour, the author of the Michael L. Printz Award-winning novel We Are Okay, along with Everything Leads to You, The Disenchantments, Hold Still, and You Know Me Well with David Levithan — to make the recommendation for Bustle Book Club. She chose Ash by Malinda Lo.

If you've ever thought to yourself, "This fairy tale would be way more interesting if it were way more gay," have I got the book for you. Ash, which celebrates its 10-year anniversary in 2019, is a lesbian retelling of Cinderella that has garnered praise from some of the biggest names in young adult literature, including Leigh Bardugo, Holly Black, and of course, Nina LaCour.

Here's why LaCour loves this book:

"Malinda Lo’s Ash is the best kind of fairy tale. It’s dark and moody even as it glitters with golden fairy dust. It trembles with hope and longing and magic. And even though it’s grounded in the familiar elements of the Cinderella story we all love — the dead mother, the cruel stepfamily, the prince in search of a wife, and, of course, the girl herself, so beautiful and good—it surprises us with its lyricism and its newness, especially when it comes to the King’s huntress, Kaisa, who gives Ash more than she had ever dreamed of having. I’m so excited for more readers to discover Malinda Lo’s incredible novel."

The story begins as Cinderella does: After her father's death, Ash is consumed by grief and left in the care of her cruel stepmother. At night, she escapes into the world of fairy tales and dreams that one day fairies will arrive to steal her away from her prison. So when she stumbles upon a fairy named Sidhean in the woods, she thinks it must be fate. But he's not the benevolent fairy godmother of the original tale — and he stakes his claim on Ash after she meets and falls in love with Kaisa, the King's Huntress. This lush story is a dreamscape of balls, dark magic, woods, witches, first love, and forbidden romances, and it's the perfect book to kick off your Pride Month.

After you've finished reading Ash, you may be in the mood for more lesbian literature. Try Nina LaCour's acclaimed novel, We Are Okay. The book centers on Marin who is alone in her college dormitory over winter break and awaiting the arrival of her friend, Mabel, who is desperate to know why Marin has disappeared for the last few months. The novel travels back and forth in time to describe Marin's complicated childhood and her almost-not-quite romantic relationship with Mabel. A coming-of-age novel about young love, friendship, and grief, We Are Okay is a perfectly bittersweet summer read.

'We Are Okay' by Nina LaCour
Amazon

After you've finished reading Ash and We Are Okay, join the conversation on Goodreads.