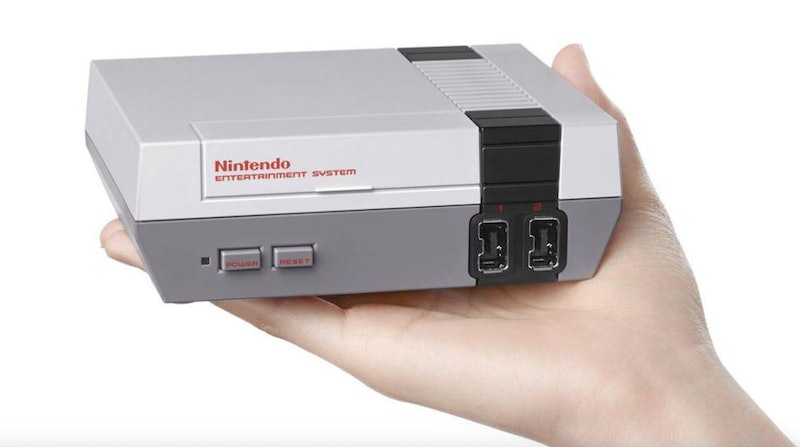 HUGE news for fans of Super Mario Bros. 2: The Nintendo NES Classic Edition console is coming back to retail stores in the United States next month, about a year after axing the popular system last April. Though Nintendo's been teasing the reboot since last September, this is the first time gamers have been gifted with a concrete date. Nintendo says NES Classic D-Day is June 29, which is SO SOON.

According to TechCrunch, NES Classic consoles will be available in the U.S. until the end of the year, though it's not clear whether or not they'll be sold outside the country during that period. The first iteration of the NES Classic console debuted in Australia and Japan in August 2016 and in Europe and in North America that November. The console is a mini-version of the original Nintendo Entertainment System, the 8-bit video game console that lit the gaming industry aflame when it was released in the mid-1980s. It provided gamers with home versions of popular arcade games like Donkey Kong, Duck Hunt, Hogan's Alley, The Legend of Zelda, Tennis Baseball, Pinball and, of course, Super Mario Bros, and it boosted video game sales that had tanked in the early 1980s thanks to the video game market crash of 1983.

In the years since, Nintendo's released a slew of innovative consoles, including the Nintendo 64 (which debuted in Japan in 1996), the Game Boy Advance, and the Wii console. But the Nintendo Entertainment System remains one of the highest selling gaming consoles of all time, hence why Nintendo decided to release a miniature version of it two years ago. The NES Classic console came pre-loaded with 30 classic games, including, but not limited to: Kirby's Adventure, Mario Bros., Dr. Mario, Donkey Kong, Donkey Kong Jr., Castlevania, PAC-MAD, Super Mario Bros. 1-3, The Legend of Zelda, and Zelda II: The Adventure of Link. And while the console was the spitting image of the original Nintendo Entertainment System, it worked with modern televisions, so people could watch 8-bit Mario Brothers bounce around on hi-def flat screens.

When the NES Classic was first released, Engadget gave it an 83/100 ranking, praising its similarity to the OG NES system as well as its stellar game selection. "At $60, the NES Classic Edition offers an incredible nostalgic value: Two dollars a game for many of Nintendo's most iconic titles," Engadget reported, though the site did take issue with the NES Classic's short control cable ("you’ll be sitting a lot closer to the TV than you'd probably like," the reviewer noted) and the fact that the console sold out so quickly. Now, of course, folks who missed out on the NES the first time around can snag it before it disappears come 2019.

If 8-bit is too retro for you, in addition to the NES Classic, Nintendo released a 16-bit Super NES Classic console last September. That baby outsold the NES Classic, but you can still score one on Amazon or at a gaming store today.