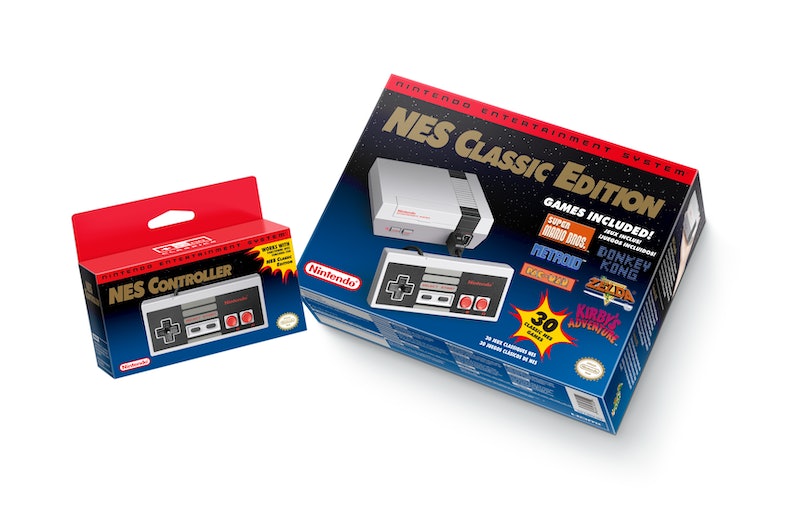 Dreams really do come true, you guys — come Nov. 11, we can all rush out to buy the Nintendo Entertainment System: NES Classic Edition, a mini replica of the NES console that reached cult status in the '80s and '90s. And if you're wondering what games are on the mini NES, prepare to feel all the nostalgic feels, my friends, because Nintendo is bringing back some true greats from our youth as part of the 30 games included with the console.

Before we list those, though, can we just talk for a minute about how rad it is for Nintendo to revive this gaming system of old? Despite the many technological advances and myriad cutting edge gaming systems that have been introduced in time since the NES was first released in 1985, it is the one gaming system all gamers seems to have a soft spot for. It is the original (after, you know, the Atari, which hasn't stood the test of time in the same way). Our first gaming love. And everyone knows you never forget your first love. The revival version may not be the OG NES, but it'll be pretty darn close. It will look exactly like the old console, but it will boast the capabilities needed to connect to today's hi-def TV screens. Swoon.

So here's the 4-1-1 on the games that will be included with the console — stick around after the jump so we can delve into a few favorites:

Now, let's jog our memories about the sheer joy that is a direct byproduct of playing these games.

In full disclosure, I've played the heck out of some Donkey Kong in my time. I can't wait to wield the control of this scatterbrained brute once again as he makes his way through the jungle in hot pursuit of a hoard of bananas.

The world lies shrouded in darkness. The winds die... The sea rages... The earth decays... But the people believe in a prophecy, patiently awaiting its fulfillment. Man, those game developers sure have a way with words. Let the journey begin again!

My editor, Bustle's Lucia Peters, is amped about this one — in her own words, it is "hands down my favorite Kirby game in the history of the franchise." And who can blame her, really? If the prospect of tracking down the seven pieces of the Star Rod to return to the Fountain of Dreams doesn't excite you, I just don't know what will.

4. The Legend of Zelda

Can we all just agree that this is the most iconic of the Mario series of games to ever hit Nintendo? I fully intend to shut myself off from the outside world for hours on end so I can give rescuing Princess Toadstool (before she was renamed Peach) from King Koopa the gosh darn attention it so rightly deserves.