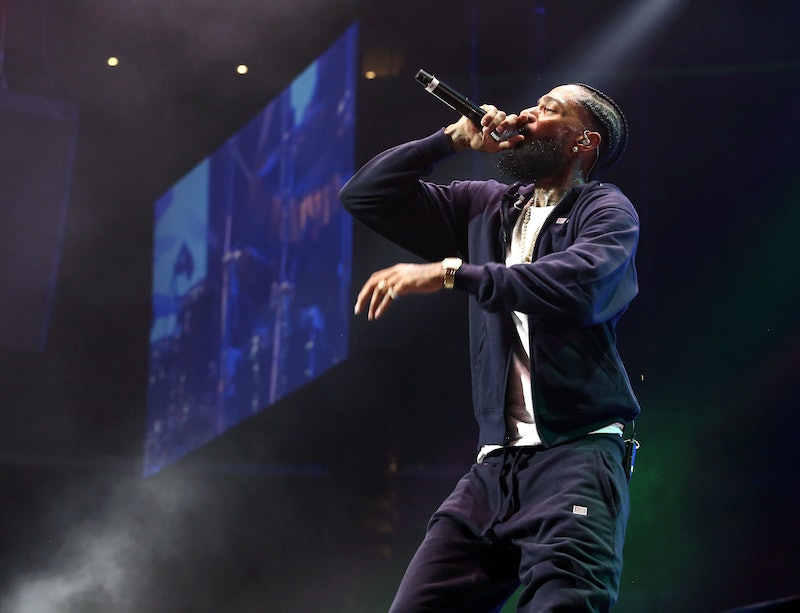 The 2019 BET Awards were just as fun as they always are, complete with a Beyoncé parody from host Regina Hall and a rare Rihanna appearance. But the night took a more somber tone during the BET Awards Nipsey Hussle tribute, in which performers took to the stage to honor the late rapper, and his family, including wife Lauren London, spoke on his behalf.

Earlier this month, BET announced that they would posthumously honor Nipsey with this year's Humanitarian Award. And the BET Awards paid homage to him during the pre-show with a blue carpet instead of the usual red for most shows. It felt like a fitting tribute to the Grammy-Award nominated rising star, who was gunned down in front of his Marathon Clothing store in March and known for his efforts to effect change in the lives of those around him.

Throughout his life, Nipsey worked to make his Crenshaw neighborhood a better place through several business ventures like his store, co-working space Vector 90, and plans to meet with local authorities to put initiatives in place to provide jobs and entrepreneurship opportunities for residents. T.I. took to the stage to set the tone for the Nipsey tribute and spoke at length about his impact.

"Ermias "Nipsey Hussle" Asghedom was more than a rapper, a teacher, activist, and philanthropist," said T.I. "He was a revolutionary. His emphasis on the power of equity and ownership of our art led the charge of independence and created a blueprint for up and coming artists today to follow."

At Nipsey's funeral, his brother Blacc Sam made it clear that he wanted to continue make sure that the marathon continues via cultivating the seeds planted during his little brother's life. And, Hussle's longtime love Lauren London frequently honors Nipsey's legacy on Instagram as she remembers what he meant to her, his fans, and the city of Los Angeles.

London and Nipsey's family, including his parents, sister, and children, all took the stage to accept the honor on his behalf. As fans expressed their love for Lauren, she kept her comments short and simple, which was understandable considering that she's still processing her grief. "I just want to thank you guys for all the love and support," said London. "And the marathon continues again."

Nipsey's mother Angelique Smith spoke at length about she processed his son's death and said it was confirmation after a few uneasy weeks leading up to that fateful day. "Ermias and I held the same space," Smith recalled. "I did not sleep for two weeks leading up to his assassination." She revealed that Lauren told her how Nipsey was cleaning up things right before his death as though he knew his spirit was going to transition.

The segment then transitioned to a string of performances honoring Nipsey's legacy. Singer Marsha Ambrosius took a dimly lit stage surrounded by fans with lights as she sung "Real Big," a collaboration between her and the rapper on his Victory Lap album. Then, his fellow LA native and close friend YG performed their joint song "Last Time That I Checc'd" before DJ Khaled and John Legend wrapped up the tribute with "Higher," which prominently features Nipsey, and was his last music video.

Nipsey's voice was heard on his own parts as a screen showed clips from the video and cameras showed Lauren, Nipsey's sister Sam, and his daughter Emani nodding along with the music. It was a truly touching yet heartbreaking way to end this year's awards show and honor his life.

BET's Nipsey Hussle tribute was a reminder of the effect he had on others during his life and how much he will be missed by so many in the years to come.

More like this
A Taylor Swift Documentary About The Ticketmaster Fiasco Is Streaming Now
By Grace Wehniainen
Elton John Shares Plans For Landmark Glastonbury 2023 Performance
By Sam Ramsden
The 'Love, Lizzo' Harry Styles Scene Is Just 1 Moment That Made Fans Feel Seen
By Brad Witter
Mariah Carey Is "So Proud" After Her Kids Joined Her In The Thanksgiving Day Parade
By Stephanie Topacio Long
Get Even More From Bustle — Sign Up For The Newsletter