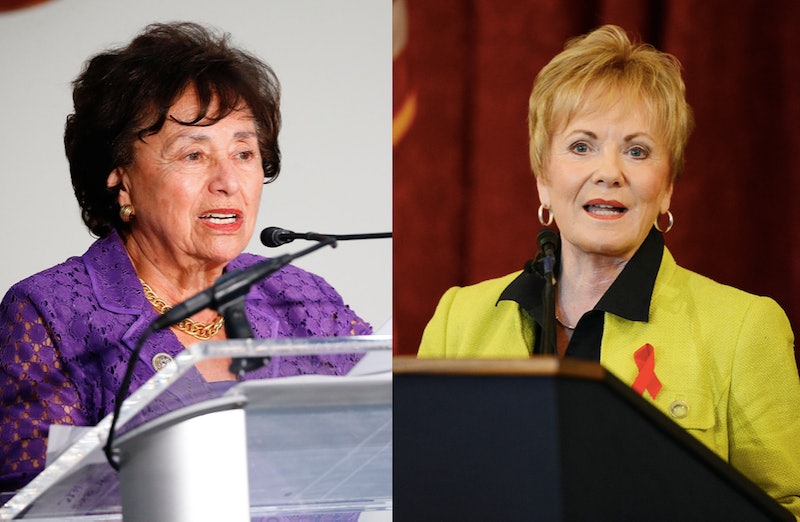 Government funding is set to lapse again on Friday, and one of the committees responsible for brokering the deal is breaking barriers. New York Democrat Rep. Nita Lowey and Texas Republican Rep. Kay Granger are the first women to hold the Appropriations Committee's highest positions.

Lowey, committee chairwoman, and Granger, committee ranking member, will lead the negotiations between the two warring parties for this year's fiscal funding, according to The New York Times. This round of negotiations will likely also include the contentious debate about funding a border wall, which led to the showdown between President Trump and Democrats that resulted in the longest government shutdown in history.

The two describe a healthy working relationship that they hope will carry through the negotiating process. "We are honest with each other. You always know where she stands," Lowey told the Times. "When she's the chair, I will lose the battles. When I'm the chair, I win them."

Lowey has publicly talked about her disagreements with Trump's border security goals. In early January, the Democrats unveiled a plan to re-open the government. While speaking on the House floor, Lowey said the president made "ridiculous demands" with regards to requiring funding for a border wall, according to the New York Post.

By late January, Lowey seemed to signal she still wasn't impressed with the Trump administration's insistence on a border wall. "Smart border security is not overly reliant on physical barriers," Lowey said, according to The Associated Press.

Lowey and Granger's colleagues expressed confidence in the pair's ability to lead the parties to a fiscal compromise. "It's not just, Oh, look, we’ve put two women in," Vermont Sen. Patrick Leahy told The New York Times. Leahy, a Democrat, is the ranking member on the Senate's Appropriation Committee. "No, you've put two of the absolute best legislators you could have in Congress on there."

Oklahoma Republican Rep. Tom Cole said the pair worked together well — and with manners. "Disagreeing without being disagreeable. It's what the American people tell you they want, but seldom reward," Cole told The New York Times. Connecticut Democrat Rep. Rosa DeLauro told the Times that the pair, who have worked together for years, are "unbelievably close" colleagues. "In this institution, you've got a lot of acquaintances, but not a lot of friends," DeLauro told the newspaper.

Lowey told Reuters that this round of negotiations for an appropriations bill made her "optimistic" overall about avoiding a government shutdown. But the chairwoman cautioned against the rumored deadline. "It will probably take a little longer," Lowey told the wire service.