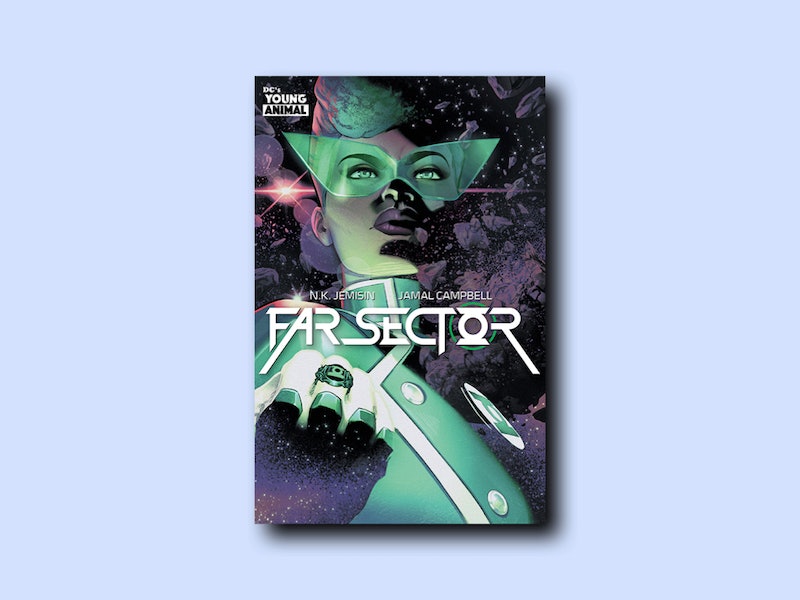 N.K. Jemisin has had a "busy year," she tells me. The back-to-back-to-back Hugo Award-winning author of the Broken Earth Trilogy published her most recent short story collection, How Long 'til Black Future Month?, in November 2018, and has a new series coming next year, beginning with The City We Became in March 2020. In between those two books, Jemisin has been working on another venture: creating a new Green Lantern for Far Sector, a new series she's writing for Gerard Way's Young Animal imprint at DC Comics. So when the author of the Inheritance Trilogy tells me she's planning to use the next few months to rest up, I believe her.

"Well, we’ve got 12 issues [of Far Sector] altogether," Jemisin tells Bustle, "or at least I’ve written 12 issues. Jamal [Campbell] is working on the art for, I think, issue three, right now, so we’re going to continue putting that out there and see how people like [it]."

The Far Sector story centers on Jo Mullein, a New Yorker from contemporary America who becomes a Green Lantern — one of a class of superheroes whose willpower fuels the abilities they channel through their Power Rings.

Lantern Mullein is unaffiliated with the Green Lantern Corps — a coalition of heroes who protect the 3,600 sectors of the universe — and she's been assigned to help the City Enduring, a world populated by a Trilogy of emotionless races. They've requested a Lantern, and a human one, at that, to help them solve a series of murders that simply shouldn't happen on a planet like theirs. Far Sector follows this newly empowered Green Lantern into the field, where she confronts an enemy that only she may be able to understand.

Here's what N.K. Jemisin had to say about writing a new Green Lantern for Far Sector:

How does Far Sector differ from other takes on Green Lantern?

N.K. Jemisin: Well, I can’t say because I haven’t read every take on Green Lantern. It’s in a separate part of the universe. That much of it, I don’t have to actually read a bunch of other Green Lantern comics to know, although I have read a lot of them at this point. Basically, the rest of the Lantern stories take place within the 3,600 sectors that are overseen by the Guardians, what they call Guardian Space.

This particular one takes place outside of Guardian Space, in a culture that is of almost-comparable level technology with the Guardians, and so the Guardians have not done much more than have very basic diplomatic contact with them. And they’ve requested someone! They’re aware of the Green Lanterns. They know of the very many Earth-based Green Lanterns, and they’ve specifically requested a Lantern for help with this, because they think that they’ve got a problem that an outsider would be especially useful for.

So that’s kind of the core difference, is that she’s there as a lone Lantern representative, except that she’s not really part of the Lantern Corps. She has not interacted with the other Lanterns thus far. She knows that they exist. I don’t know if they know that she exists. The Guardians do, though. Some of this will become clearer over the course of the story. The Guardians know that she exists, [but] she has not been part of the Corps.

Where and when along our timeline does Jo come from?

N.K.J: Right now. She’s a New Yorker. I’m trying not to spoil the entire backstory, but she was NYPD for a while, she was U.S. Army for a while, and then she got recruited into the Lanterns. And that happened about six months before the start of Far Sector.

So there’s a war between the Trilogy races that’s briefly shown during flashbacks, and the way it’s set up is reminiscent of things that are going on today in the real world. Could talk a little bit about the timeliness of Far Sector?

N.K.J: At the end of the day, I’m just telling a story about another culture, but obviously, my understanding of how cultures work is informed by how our own world works. And in that passage where Jo is giving the backstory of the Trilogy races, she points out that “divide and conquer” is a stock technique that we’ve seen used on our own world. It’s one of the things behind the genocide in Rwanda, [and] we’ve seen it happen in the U.S. recently, during the 2016 presidential election. You convince people that their interests no longer align with those of the people that were once their neighbors, and people will turn on each other.

Why does the City need someone who experiences emotions to help them investigate the crimes that are happening there?

Their culture decided a long time ago that emotion was dangerous, emotion was incomprehensible, and so on. They want an expert, now that they’re starting to realize that they’re going to have an outbreak of people who will be catching emotions and don’t know how to control themselves — because there is a drug in the City which allows them to feel emotions again.

Everybody in the City permanently on the Emotion Exploit... a genetic alteration that suppresses their emotions. It’s something that got imposed on them a long time ago, for reasons that will become clear over the story, but they’ve learned to live with it. In fact, their whole culture is built around it, and they’re comfortable with it, for the most part.

But there are people who resent having had their emotions taken, and so the latest, hottest, coolest drug in the City Enduring is Switchoff, which switches off the Emotion Exploit and allows them to have feelings again. People on Switchoff have been committing these crimes of passion. There’s a Switchoff epidemic in the City, and they’re seeing other signs that it’s beginning to change the City. They don’t know what to do about it, but they figure that Lanterns, who are based on emotion, will be able to figure it out, and they figure that human beings, who seem super emotional, might be able to help them figure it out.

Other sci-fi franchises like Star Trek and The Giver have taken on this idea of people without emotions, and there’s also something interesting happening with language in the City Enduring. We see the police chief being called the Peace Captain, for example. What is the relationship between emotion and language in Far Sector, and how do you think your treatment of those concepts differs from that of other sci-fi writers?

N.K.J: My only thought had just been that this is a culture that was emotional until only about 1,000 years ago, so they’re going to have all of the artifacts of emotion, still, in their language. They’re still going to use words like “I’m excited” to express interest in a thing. That’s just part of the way that language works. It’s not going to suddenly vanish.

So there’s no specific language thing that I did, other than just acknowledge the fact [that], if this was a culture that had never had emotion, then it would be different. But because they evolved with emotion, literally, it’s not going to look like Vulcans. They’re not going to be looking at each other in puzzlement when another person smiles or makes a joke. They’ll show appreciation for the joke, it’s just going to be very measured appreciation, and it will be almost ritualistic.

N.K.J: I’ve got a novel coming out in March — The City We Became from Orbit Books. That’s pretty much it. Between now and March I’m trying to rest up a little bit and recover from a busy year.

Far Sector, no. 1 by N.K. Jemisin and Jamal Campbell is available now from DC's Young Animal.

More like this
This Episode 6 Moment Foreshadows Viserys' Fate On 'House Of The Dragon'
By Grace Wehniainen
Nicola Coughlan Shared A Lady Whistledown Excerpt From ‘Bridgerton’ Season 3
By Grace Wehniainen, Alyssa Lapid and Sam Ramsden
10 Must-Read New Books Out This Week
By K.W. Colyard
Watch The Thrilling Teaser Trailer Of 'Shadow And Bone' Season 2
By Gretchen Smail and Jack Irvin
Get Even More From Bustle — Sign Up For The Newsletter