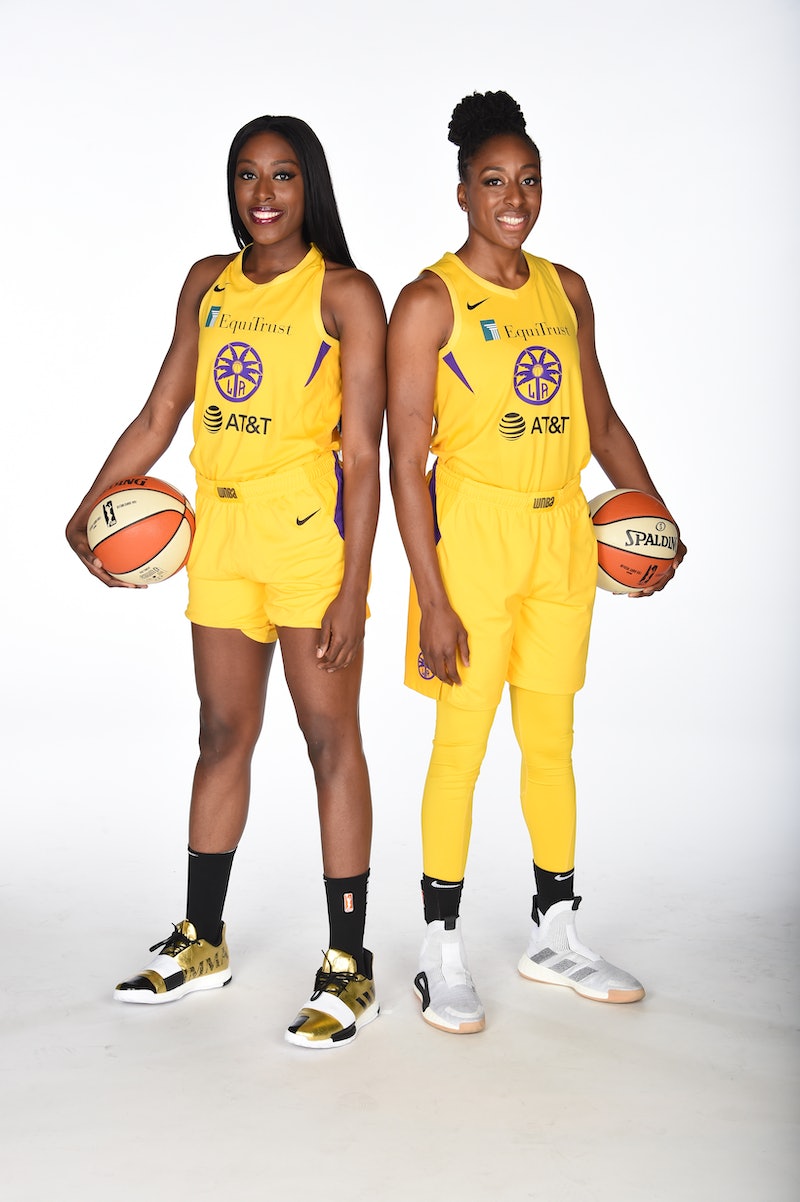 Basketball players Nneka and Chiney Ogwumike have always supported each other on and off the court — from their very first childhood practice in their Texas hometown, to their current careers playing for WNBA team the Los Angeles Sparks (which makes them only the second set of sisters to play for the same team in WNBA history).

But while the Ogwumike sisters have had many similar career milestones — including each leading the Stanford women's basketball team to victory, and starting their WNBA careers as the #1 draft picks in their respective years — they resolutely maintain their own identities. Below, they talk to Bustle about how their Nigerian parents bucked tradition by getting them into sports, how varied interests are the key to success, and how they support each other while maintaining their individuality.

On their first foray into sports...

Chiney: We started off in gymnastics. But then we became too tall, obviously, and my mom's friend advised her to put us in basketball. We went to our first practice together, but only Nneka made it through the whole practice; I went and hid in the bathroom.

Nneka struggled that first year she played, but every time she came home from practice, she taught me everything she knew. I'm someone who likes to be good at everything that I do — so if it's bowling or playing video games or playing cards or whatever, I don't do it, because I know I'm not good at it. But we call Nneka "the guinea pig." She’s willing to try, she's willing to be adventurous. And she went through learning that first year where she was the worst, and then she taught me everything she knew, and I started playing the next year. Nneka is not afraid of failure, and I think that's why she's succeeded and been such a trailblazer. So I give a lot of credit to Nneka's precedent for where we are today.

Nneka: We had a very kind of matriarchal family, because my dad traveled a lot, and so I was kind of like the third parent, along with my mom, to Chiney and my two other sisters. With my sisters, whatever they do, I just don't want it to be as hard for them as it was for me. So that's how I've always approached what I do. We all kind of fell in love with basketball in our own way.

Chiney: Basketball has always been a family thing — not just for Nneka and I, but for our entire family, including our younger sisters, Erica and Olivia, who won Conference USA this year.

Chiney: It's not surprising that we’re playing for the same team, because it's been a part of our basketball “identity” for a long time. Basketball has just created so many great opportunities for us, but we've always done it together.

Nneka: I don't think we've ever really been compared as players — maybe in college a little bit, but for the most part, people took us as we were, and they took us as individuals both on and off the court. They kind of celebrated our similarities and our differences in that way. That’s kind of why we've seen so much success playing together.

Chiney: Nneka has had so much success with the Sparks, I started off my journey in Connecticut, but I think we knew that at some point this is where we'd want to be, especially professionally, before all things were said and done. To have the opportunity while most of us are in our prime, is something I don't think we take for granted.

Basketball is a really big part of us, but it's not what we identify ourselves with.

Nneka: I would say that we give all the credit to our parents, because at that time, especially in Nigerian culture, young girls were expected to be helping their moms in the kitchen and also holding down their academics, but maybe not necessarily in gyms and competing like that at the young age of 10. So we give a lot of credit to our parents, who saw us playing sports, and saw all the values of mixing with a lot of different kids, learning work ethic and camaraderie, and just treating the last player as well as you treat the first player — all those great values that basketball brings. They saw that and they kept us in it. They realized that it's a good thing for young girls to have an outlet to be strong and confident.

They saw that at the time when their peers didn’t. But fast forward, next thing you know, we have scholarship offers from Stanford and Notre Dame and UCONN … without our parents' foresight, we wouldn't be where we are today. So we give a lot of credit to our parents. They understand Nigerian values, and they also treat us like strong women, our own independent women. And now look at where we are. We never planned it. Now parents [who were unsure about the value of children playing sports] are putting their kids in sports because they see what it can do.

Nneka: There is a certain laser focus that you need to have to succeed, and yeah, you can eat, sleep, drink basketball, but that doesn't mean that you're not eating, sleeping, and drinking other passions. So Chiney eats, drinks, sleeps basketball while she's playing, and also while she's reporting on it. [Editor's Note: Chiney works as a full-time sports analyst on ESPN, in addition to her WNBA career].

And so there are different ways to give 100% to what you're doing. I think that's kind of what I try to preach to the youngsters these days: superstars aren't born overnight, and because you understand that, you have to understand that there's work that you put into it.

Chiney: I would say, for anyone else with a similar heritage who’s interested in becoming a professional athlete: don’t fear the unknown. In our community, that kind of happens when it comes to liberal arts or the entertainment industry — although the most successful people in those fields are Nigerians and Nigerian Americans. So don’t limit yourself, don't fear the unknown, and if you have a passion, you really just have to follow it and stay true to it.

I think that also, as generations progress, a lot of older people are now understanding that passions and professions aren't just limited to the traditional lawyer, doctor, or engineer. Although those are great fields to engage in — and to be honest, we are probably the most prominent in all of those fields around the world. But we are also prominent in the creative industries as well.

Nneka: Yeah, look at arguably the best player in the NBA Giannis Antetokounmpo, Nigerian. Best boxer Anthony Joshua, Nigerian. I think it's just within our culture to work hard. And the thing is, as long as you have a foundation for success which is academics, which is what Nigerians typically preach, follow your passions and you never know where that will take you.

As told to Gabrielle Moss. This interview has been edited for length and clarity.