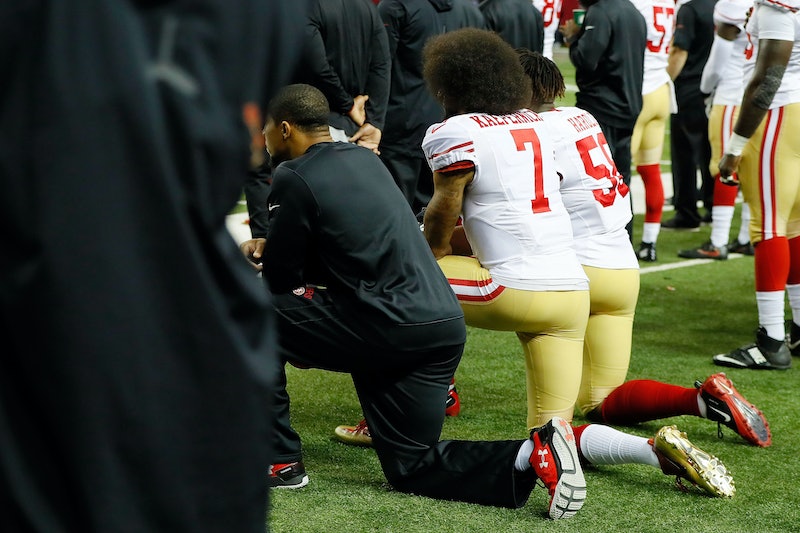 Major sporting events have long been opportunities to make major, public statements, which was definitely the case for the NFL in recent years. But this year, no 2019 Super Bowl players kneeled during the anthem on live TV. It wasn't immediately clear whether any players kneeled offscreen, or otherwise chose to remain in the locker rooms.

The ongoing kneeling protests have occupied public attention since August 2016, when then San Francisco 49ers quarterback Colin Kaepernick began sitting — and then kneeling — during the National Anthem. From the start, he explained that he was protesting the way that people of color are treated in the United States.

"I am not going to stand up to show pride in a flag for a country that oppresses black people and people of color," Kaepernick told NFL Media at the time. "To me, this is bigger than football and it would be selfish on my part to look the other way. There are bodies in the street and people getting paid leave and getting away with murder."

Kaepernick is far from the first person to use large sporting events as a venue for social justice-oriented demonstrations, and in fact, he was following a well-worn path. Athletes — and especially athletes of color — have a long history of using their position in the public eye as a way to draw attention to racial inequality, especially in the United States.

But Kaepernick's kneeling came at a particularly divisive time in American history — namely, right in the final stretch of the 2016 presidential election, which may have contributed to the amount of attention that his protest received. Discussions about race, inequality, and police brutality were dominating popular discourse as renewed conversations about white privilege and institutional racism became important talking points for presidential contenders. And as the 2016 season progressed, and the 2017 season after it, more and more athletes across disciplines began sitting out during the National Anthem, as well.

While there was no outwardly visible kneeling during Sunday's big game, there was a distinct nod toward the American Civil Rights Movement during the pregame coin toss. This came by way of Bernice King, Rep. John Lewis, and former UN ambassador Andrew Young, all of whom were present. Each of the three figures are social justice and civil rights icons, and King, of course, is also Martin Luther King Jr.'s youngest daughter. Referencing being present for the coin toss, King tweeted, "A significant moment. My mission is #JusticeForAll. Humanity is turning the tide and our efforts must include bridge builders, strategic negotiators and ambassadors."

Their presence was indeed significant for a multitude of social justice-related reasons, and the kneeling protests were just one of them. And though no players visibly kneeled during the live TV stream, activists showed support for Kaepernick's message by using the "ImWithKap" hashtag. Notably, the 2019 Super Bowl took place in Atlanta, which is not only part of the district that Rep. Lewis represents, but also an important location in Civil Rights history.