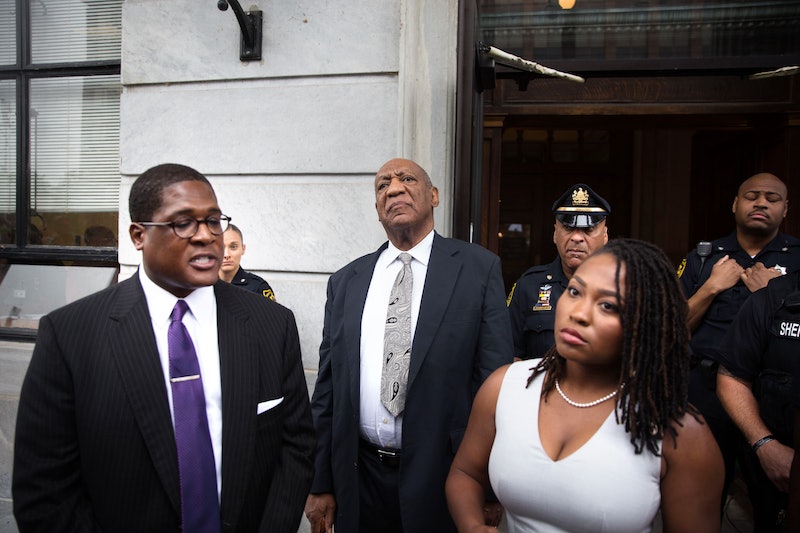 The Bill Cosby sexual assault trial ended in a mistrial on Saturday, with the jury intractably deadlocked after days of deliberations. It's not an out-and-out victory for Cosby, who'll face a retrial, but it's undeniably a victory for his defense team who proved they could hang a jury hearing sexual assault charges against a man facing dozens of public accusations. But despite his spokesperson response to the mistrial that Cosby's "power" is back, it isn't, in fact, because he, as powerful celebrity, never lost in the first place.

Immediately after the mistrial, Cosby's team escorted the 79-year-old comedian ― who has been accused of sexual assault by nearly 60 women, and strenuously denies any wrongdoing ― out of the courthouse, before a group of waiting reporters. His spokesperson Andrew Wyatt then gave a brief statement about the outcome, claiming his client's "power" had been restored, and that his legacy had never left:

Wyatt's words were decidedly triumphant, even gloating, which might seem like an odd tone to take after a mistrial. Cosby has not, after all, been acquitted, and is still in a state of legal jeopardy. It's a bit like taking a victory lap after a race was halted due to a false start. Everything is still up in the air, and the eventual outcome remains entirely unknown, so the celebratory attitude seems strange.

But Wyatt is on to something when he speaks about "power," though not as he defines it. Rather, it's the same power countless women have run into when their word is held up against that of a rich and powerful man, whether in the court of public opinion, or a court of law.

Throughout the trial, Cosby's high-powered and top-dollar defense team attempted to poke holes in Andrea Constand's story. Specifically, by highlighting things about her behavior towards Cosby which, while they might seem strange to people unfamiliar with the emotional and psychological effects of sexual trauma, make total sense to people familiar with the impacts of sexual trauma.

For example, the fact that she continued to call him following the date of the alleged assault, and once brought him some bath salts. The defense's implication was clear enough: that Constand had willing, consensual sexual contact with Cosby, and then made up a story of sexual assault after the fact. Despite the relative rarity of false rape and sexual assault claims, and the increasingly well-understood ways sexual trauma influences people's behavior, this argument remains the go-to play for sexual assault defendants.

The reason this victim-blaming approach is used so often? It works. In a society still steeped in rape culture and chock full of problematic and beliefs about sexuality, consent, and how women are supposed to behave when they're abused, this line of attack is strong enough to convince people that maybe, just maybe, the whole thing really is a lie.

And when you only need to convince one out of 12 people to deadlock a jury ― based on the cornerstone principle that it's worse to convict an innocent person than let a guilty one go free ― that is an enormous power. The thing Wyatt got wrong was that it somehow needed to be "restored" ― Cosby's been in possession of that power the moment he stepped into the courtroom, thanks to the collision of an enduring system of patriarchy and rape culture.

The power to avoid legal consequence is not the power to restore one's reputation to its past glory, however. That's the one respect in which Wyatt was dead wrong: Cosby's life and legacy will never go back to the way it was before the trial, or before so many women stepped forward to make their claims known.

In fact, even if Cosby were fully acquitted on the charges brought by Constand ― far from a certainty at this point ― the idea that anyone will ever view Cosby the way they used to seems truly unbelievable, a feat of wishful thinking more than anything else. And in that respect, no matter what happens from here, his accusers have ensured awareness through their bravery, if not yet justice.