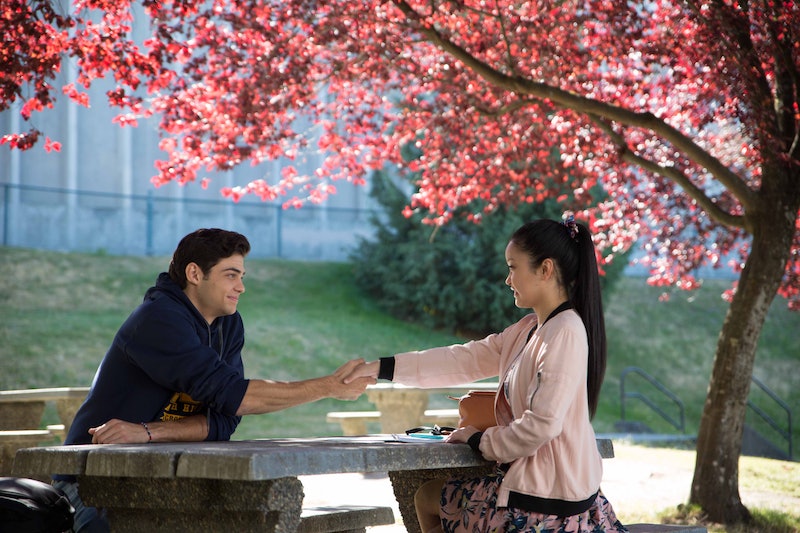 Netflix is single-handedly making romantic comedies a thing again, thanks in large part to the release of its latest original movie, To All The Boys I've Loved Before, which centers around the budding love story between Peter Kavinsky and Lara Jean. By now, many of you have probably watched the film numerous times and may think you know all there is to know about these two lovebirds. However, Noah Centineo recently revealed one detail about To All The Boys that could entirely change the way you watch the movie going forward.

During a recent interview with The Wrap, Centineo shared the exact moment he believes Peter fell in love with Lara Jean, and, while it might surprise some fans, if you stop and think about it, it actually makes total sense. "From the beginning, Peter is interested. Like, from that first remark about her shoes. In this first scene, when we meet Peter, I think he's interested," Centineo explained. "But I think he really, really realizes this is the girl for him in the kitchen scene when they're at his house and they're opening up their family history to each other."

The scene Centineo is referencing, is of course when Peter opens up to Lara Jean about his estranged father, who has remarried and started an entirely new family without Peter or his little brother, Owen. It's a topic Peter doesn't discuss with anyone, making it all the more significant that he feels comfortable enough with Lara Jean to show that side of himself. Meanwhile, she too allows herself to be vulnerable by opening up about her mom's death and how much she misses her.

Neither of these characters necessarily meant to share such an intimate moment together, but it definitely serves as a turning point in their relationship, where it becomes much less fake and a lot more real. So it makes sense that, for Centineo, this was the moment when Peter started to fall in love with Lara Jean, even if he didn't quite realize it at the time just yet.

There are a ton of great Peter and Lara moments to look back on — that improvised back pocket spin immediately comes to mind, along with countless others — but the kitchen scene in particular is definitely a standout moment for both of them. Maybe some viewers didn't realize upon first watching just how significant it was at the time, but now that they know how Centineo interpreted the scene, it's safe to say fans probably won't be able to look at it the same way ever again. If they go back, they can practically see Peter falling head over heels for Lara Jean throughout that conversation.

It's not as if we really needed another reason to love Peter, or this love story in general, but we'll take any details we can get while waiting patiently (or not so patiently) for news of a To All The Boys sequel to come out, which will hopefully be sooner rather than later. Until then, we'll just have to quench our rom-com thirst by watching To All The Boys over and over again on Netflix. Challenge accepted.