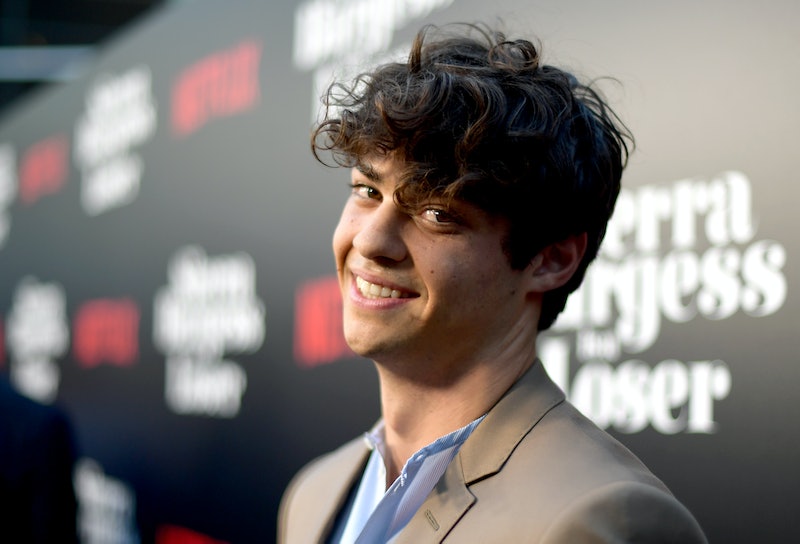 The internet's favorite boyfriend is returning to Netflix. To All The Boys I've Loved Before and Sierra Burgess breakout heartthrob Noah Centineo is set to star in the new Netflix film The Perfect Date. Not only that, but Netflix just released the first official photos from the film, and, by the looks of it, this new movie is only going to make Centineo even more of a dreamboat.

The Perfect Date, previously titled "The Stand-In," will see Centineo in the role of Brooks Rattigan, a guy who creates an app through which users can hire him as a stand-in boyfriend. All this to save up for college, as noted on the film's IMDB Page. Meanwhile, everyone's favorite Riverdale vixen Camila Mendes will play Shelby Pace, a private school student who becomes bored with her choice of wealthy suitors and stumbles upon Brooks' app. Also part of the cast is Laura Marano, who will take on the role of Celia Lieberman, a wealthy girl who goes against her parents wishes on a quest to be herself, and Odiseas Georgiadis, who will play Murph, Brooks' best friend and co-creator of the pretend boyfriend app.

While the character descriptions are certainly exciting, many details surrounding the film still remain scarce. On Friday, Jan. 11, Netflix's official Instagram account teased a split screen of two scenes from the film, which feature Centineo's character on his respective dates with Shelby (Mendes) and Celia (Marano).

Calling the post a ""Very Important Announcement Alert," Netflix wrote in the caption:

"@ncentineo will pretend to be your boyfriend this summer! Well, he will in the Netflix original movie 'The Perfect Date' w/ @camimendes and @lauramarano"

The streaming service has yet to share a release date for the new film. However, details from their caption appear to be alluding to a Summer 2019 premiere. Last April, Marano posted a photo to Instagram which featured the film's four main stars eating outside on a blanket together, revealing that filming wrapped that spring.

Those still reveling in the romance of To All The Boys I Love should also be glad to know that The Perfect Date seems to share many striking similarities with the 2018 film featuring Lana Condor. Not only is the movie a Netflix original starring Noah Centineo, it's also about a guy who stands in as a fake boyfriend. Furthermore, it's being produced by the same company, Awesomeness Films — meaning that there may be many parallels when it comes to production and storyline.

Since becoming a huge sensation with TATBILB, Centineo has his sights set on many more projects ahead. The 22-year-old is starring alongside Kristen Stewart and Elizabeth Banks in Banks' upcoming, action-packed reinterpretation of Charlie's Angels. He'll also play the lead in the action love storyValet. According to IMDb, Centineo is also set to star in Jackie Chan's The Diary alongside Kevin Kline.

Now that Centineo has completely stolen the hearts of all America with his appearance in both To All The Boys I've Loved Before and Sierra Burgess Is a Loser, it seems that he's totally ready to recreate rom-com magic with The Perfect Date.

More like this
Zendaya Shares Intimate Photo With Tom Holland To Wish Him A Happy Birthday
By Bustle Editors
12 ’90s Movie References You Missed In 'Do Revenge'
By Radhika Menon
What’s New On Netflix: Ana De Armas’ 'Blonde' & A Nick Kroll Special
By Arya Roshanian
These 25 International Horror Movies On Netflix Prove Fear Is A Universal Language
By Bustle Editors
Get Even More From Bustle — Sign Up For The Newsletter