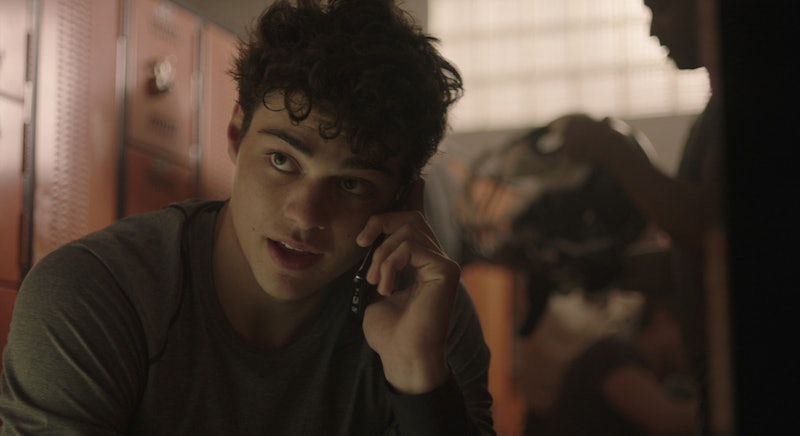 Noah Centineo became everyone’s celebrity crush after the massive success of Netflix’s rom-com To All The Boys I’ve Loved Before, winning over fans with his character’s innate sensitivity and charm. But if Peter Kavinsky stole your heart, you’re going to love Centineo’s role in Sierra Burgess Is a Loser, Netflix's other new rom-com.

In Sierra Burgess, out on Netflix Sept. 7, Centineo plays Jamey, who begins a text-only romance with Sierra while mistaking her phone number with Veronica’s, the most popular girl in school. Much like Centineo’s role as Peter in TATBILB, Jamey isn’t afraid to show his vulnerabilities once he falls for “Veronica.”

The main thing that makes him fall in love with Sierra while she’s pretending to be Veronica is the fact that she’s able to express herself so freely. After beginning their bond via text, Jamey quickly realizes that he doesn’t have to hide who he is because “Veronica” is so easy to talk to. Right after their initial text conversation, he tells his friends that Veronica is much more than a “pretty girl,” noting that she’s “actually really smart and really funny.” Throughout the rest of their conversations, he shows a side of himself that none of his friends get to see, telling Sierra his insecurities and secrets, while also giving her a glimpse of his best attributes.

These moments might remind viewers of Peter Kavinsky’s heartwarming personal growth throughout TATBILB. Once he begins to fall for Lara Jean, he shows a genuine, sensitive side full of vulnerability. Much like Jamey, Peter struggles with trying to embody a confident persona as a popular school athlete and hiding his emotions, while being romantically involved with someone who encourages him to not have to hide his true self anymore.

But another part of what makes Jamey as lovable as Peter is his compassion. By the end of Sierra Burgess, (spoiler) he decides to forgive Sierra for not being honest about her true identity and is understanding of her insecurities. He reassures her that he likes her just the way she is and that she doesn’t have to feel inadequate over not having the superficial aspects that he liked about Veronica.

This moment is reminiscent of Peter’s way of handling the deterioration of his not-so-fake relationship with Lara Jean in TATBILB. Once he sees how much Gen hurt Lara Jean, he tries to do anything to make things right with her. Even though she refuses to let him intervene, the fact that he is genuinely upset and wants to make sure that Lara Jean is happy says a lot about him. When he tells her that he had actually told Gen their romance was over after falling in love with Lara Jean, it’s clear that he selflessly cares deeply about her.

Both Jamey and Peter set the standards for non-fictional men high by being the ideal romantic partners. In both films, Centineo’s characters go through personal growth that allows them to put their emotions before their ego. The characters teach young male viewers that expressing your emotions isn’t something to be ashamed of — it’s something to be celebrated.