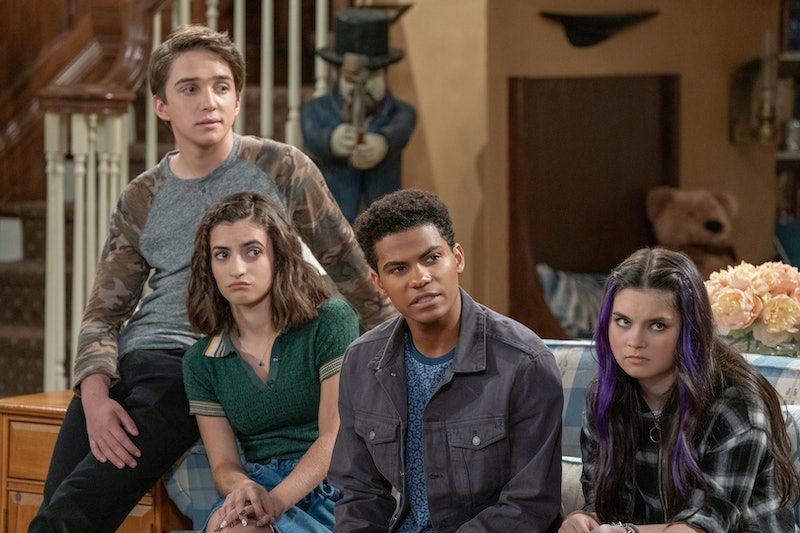 Spoilers ahead for Fuller House Season 5, Part 1. Ramona has a new love interest on Fuller House and Ethan seems like a much better fit for her than her bad boy ex, Popko. Ethan, played by Noah Alexander Gerry, is introduced in the second episode of the new season. Ramona actually has Jackson to thank for her new love connection, because Ethan is a Postmates worker who was delivering food to Jackson when Ramona first locked eyes on him.

Gerry may look familiar to fans of soap operas. Since 2017, he's played Charlie Ashby on The Young and the Restless, his big breakout role after entering the acting game in 2011. Gerry also had a one-episode role on Station 19 and played Drew in a few episodes of Netflix's Family Reunion. But when he was younger, he didn't actually see acting as a career. Gerry told Soaps in Depth that his sisters were the ones dedicated to going on auditions and he would just tag along because he was too young for his parents to leave at home. "I actually didn't like acting that much until I was about 12 or 13 years old, and I got my first audition for a drama," Gerry said. "I actually got to build the character, and I thought that was so much fun. So that kind of changed my life, and I realized that was what I wanted to do."

Even though Ethan is a new character introduced just this season, he quickly becomes a big part of Fuller House. He's in over half the Part 1 episodes, and he even has a spot in DJ's flash mob proposal. The fact that he survived Gibbler family game night in one episode is a great sign that he is really dedicated to being there for Ramona no matter what her family throws at him.

It seems like he'll be a big part of Part 2 of Season 5 as well, based on photos taken during filming. He's in all the cast wrap photos taken after the final episode, which indicates that he gets to be in the series finale to send the show off.

There also appears to be a Part 2 storyline where Ethan meets Ramona's ex Popko, because Gerry is in an Instagram photo with Isaak Presley, who plays Popko on the show. Will Ramona be confronted by her ex and have to choose between him and her new love? Only time will tell.

Ethan is a pretty chill guy, which is helpful in a giant family like the Tanner/Fuller/Gibblers. He can balance out some of the more high-strung personalities and be a calm respite for Ramona when things in the house get overwhelming with all those kids, dogs, and adults running around.

Gerry's character seems to stick it out right to the end of Fuller House, so, although he may be new, he clearly will leave a lasting impression on the series.

More like this
Love Is Blind’s Natalie Claims Shayne Signed Up For 'Perfect Match' While They Were “Still Together”
By Brad Witter
A 'Terminal List' Sequel & Spinoff Are Reportedly In The Works
By Kadin Burnett and Grace Wehniainen
You Might Want To Rewatch This Key 'On My Block' Scene To Understand 'Freeridge'
By Grace Wehniainen
The 'Freeridge' Cast Shared Their Hopes For A Potential Season 2
By Grace Wehniainen
Get Even More From Bustle — Sign Up For The Newsletter
From hair trends to relationship advice, our daily newsletter has everything you need to sound like a person who’s on TikTok, even if you aren’t.