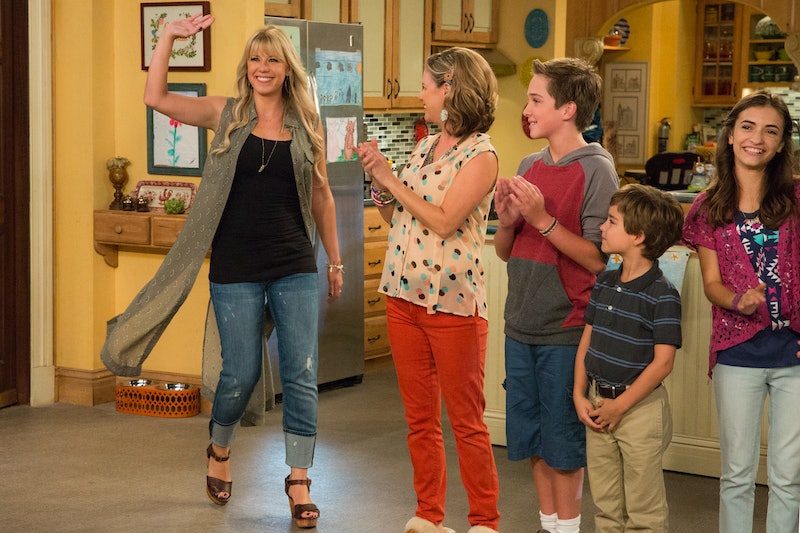 I actually can't fully comprehend that Full House's Kimmy Gibbler is a mom, let alone the mom of a teenager. There's just too much in there that blows my little mind. Kimmy Gibbler was able to take care of a child and raise her into teenagehood? Kimmy Gibbler is even old enough to have a teenager? Crazy! Yet, when Fuller House premieres on Feb. 26, the world will be introduced to Ramona Gibbler, Kimmy's living, breathing daughter. If there's one precedent Full House has set, it's that the kid actors go on to greater fame — just think of the Olsen twins. So who is Soni Nicole Bringas, who plays Ramona Gibbler on Fuller House ?

For starters, let's review what fans know about Ramona. She appears to be the anti-Gibbler — aka, smart. According to TV Line, she's intelligent, but not that into school... or living with the Tanners. "Though she’s bi-racial, Ramona fully embraces her Latina heritage, and considers living with the 'white-bread Tanners' to be 'totally lame,'" TV Line reported. "Her interests include: 'boys, fashion, being cool, social media, and taking pics every second of every day.'” Actually, she sounds kind of bratty — maybe the apple didn't fall too far from the tree after all... Here's everything you need to know about Bringas who's bringing Kimmy's daughter to life.

She's Not A Full House Super-Fan

"My family came from Spain after it aired," Bringas told People magazine, "so I didn't get the chance to grow up with Full House." To prepare for the role, the magazine added, she watched clips of Kimmy on YouTube. That totally sounds like something Ramona would do.

You may have caught a glimpse of her on Jane the Virgin, where she had an uncredited role as a hip-hop dancer in one episode, according to IMDb. If not, you might have seen her doing choreography for Annie on the finale of Dancing with the Stars. (She's the one with the red beanie in the video above.)

Fuller House is Bringas' first big, recurring role on a series, but she's been acting a long time, and with some pretty impressive people. IMDb reported that she's had parts in the TV movie Beautiful and Twisted with Rob Lowe, for example, and she did a Jordache commercial with Heidi Klum. Chances are, she wasn't so star-struck, then, to meet Bob Saget and co.

But, My Favorite Commercial Of Hers Is For The "Swagger Wagon"

Oh, cars and comedians. This commercial really feels like a mini Fuller House episode. I hope they have a chance to give Bringas a shot at dancing on the series!