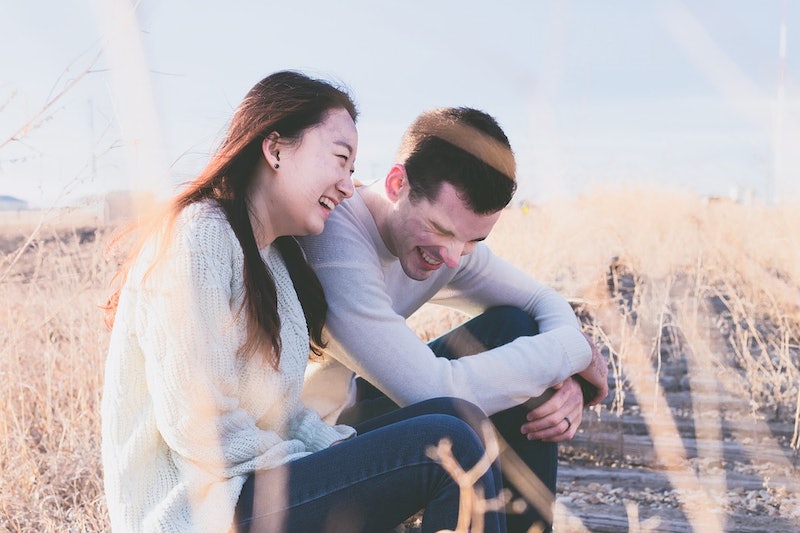 When you first get together with your partner, it's like everything is out of a dream. You get excited when they call you in the middle of the day, you plan elaborate dates, and you imagine all the ways you could get freaky. But once the whole honeymoon phase ends, which is inevitable no matter how in love you are, things start to shift between you and your SO. The relationship starts to feel a lot less like a Julia Roberts rom-com as you enter reality.

A survey of 400 couples in the journal Prevention Science showed that 14 percent of married men and 10 percent of married women noticed a change in their relationship after 30 months of being together. Some men and women even reported being "extremely unhappy" after the honeymoon phase dropped off. But that didn't mean they split up, either —it just means they may have to work a little bit harder to keep the romance going, because there are just some things that naturally change over time.

At the same time, though, this adjustment could be a chance to achieve a new level of intimacy that's so much more rewarding (time to break out the sweatpants!). Here are eight normal ways your relationship changes over time.

Not pleasant, but true. When you first shack up, you wait, sometimes painfully, until they leave the house before you run to the bathroom to take a dump, fart, or burp. But these are all natural bodily functions that you shouldn't be embarrassed of, which is why long-term relationships can be so great. You don't have to walk around on thin ice anymore.

You Have Less Sex Than When You First Got Together

A recent study in the journal Archives of Sexual Behavior showed that millennials aren't having as much sex as it may seem on the outside. We're twice as likely to be deprived of sex than Gen Xers before us were at our age. There's even a subreddit group called r/DeadBedrooms where more than 27,000 people in their 20s and 30s talk about how the lack of sex they're experiencing in their long term relationships.

It's natural to not want to jump each other's bones every single day when you've been together for a long period of time, so don't think there's anything wrong with you — or your partner, for that matter — when things start to slow down in the bedroom. It just takes a little bit of effort to spice things up. Incorporate some new sex toys, watch a few steamy flicks, and experiment with wacky positions.

You Talk About Your Period More Freely

There's nothing about your period you should ever be ashamed of, but it's not one of the most popular topics to talk about with a new SO. At first, you might get nervous about staining their sheets when you stay over while you're menstruating, and you try to hide your tampon wrappers all the way at the bottom of the trash can.

If you're dating a person who has never menstruated before, they probably don't know much about what it really means to have a period. But after you've become more comfortable with each other, it gets a little easier to talk about your menstrual cramps and your cycle, which hopefully means they're much more understanding of your overall health.

You Kiss & Hold Hands A Lot Less In Public

PDA is a staple of any brand-new couple. Whenever you attend a party or event together, you can't keep your hands off one another, and there are all kinds of pictures to prove your mutual affection. Naturally, that fades over time, and when you go out to dinner, you no longer sit in the same booth, squished up against each other. There's nothing wrong with that, though. If anything, it just means you rely on rich conversation to get you through the evening.

You Spend More Time Doing Things On Your Own

At the start of it all, you couldn't think about going to the grocery store without each other, because buying bread is so much more fun with your new beau by your side. As time goes on, though, and you establish a healthy foundation to your relationship, you bring back some independence to your life.

In The Secret Lives Of Wives, Iris Krasnow interviewed more than 200 married women who had been with their spouses for over 15 years. One of the common denominators to a happy relationship was having their own lives and doing things on their own every now and then. They don't rely on their partners to give them a sense of fulfillment. Obviously, too much time spent apart can lead to a breakup, but that's only if you take it to the extreme. A healthy dose of independence is only natural in happy long-term relationships.

Now that you're starting to shed some layers, you learn more about each other and neither of you feel like you have to put on a certain facade. So differing opinions will arise, and there's nothing stopping you from voicing those opinions. You'll probably fight about the silliest of things, like what to watch on Netflix, but the more important topics will come up as well, like how to spend your annual vacation.

You Become More Invested In Each Other's Friends & Family

The more time you spend together, the more time you naturally spend time with people who are important to your SO. Even though at the start you only hung out with their friends or family when they were there with you, as your relationship evolves, you might find yourself hanging out with these people on your own time.

It all starts with trading phone numbers with your SO's best friend or sister, and next thing you know, you're having nights out with them while your partner is doing their own thing. It's a small step toward sharing your lives with each other in a lasting way, even if you don't love how often their mom is texting you these days.

It's not easy to chip away at subjects like finances, family relationships, and complicated exes, particularly if you've only been together for a short period of time. Your guards will come down eventually, thankfully, and these topics will become much easier to talk about in a mature way. You can start to make decisions together, or at least figure out which decisions you'd like to make entirely on your own. That's one of the pros of finally moving out of the honeymoon phase.

More like this
Are Gemini & Leo Compatible In A Relationship?
By Kristine Fellizar
How Getting An Abortion Has Changed From The ’60s Through Today
By Amanda Chatel
35 Sexy Texts To Send Your Partner
By Griffin Wynne and Carolyn Steber
15 Types Of Relationships & How To Define Yours, According To Experts
By Madeline Howard
Get Even More From Bustle — Sign Up For The Newsletter