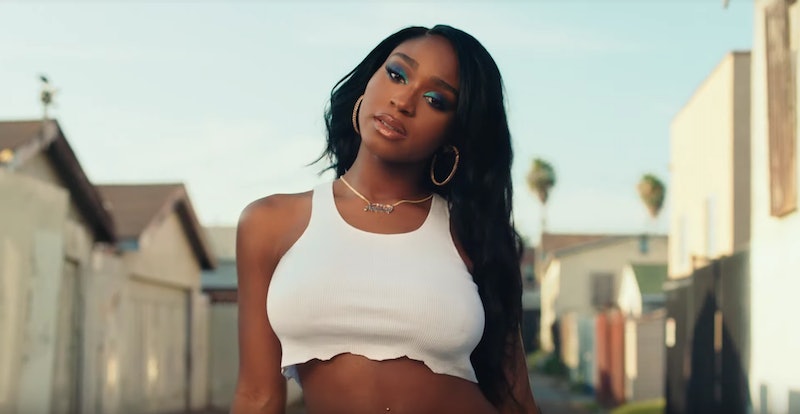 Everyone will always have a soft spot for the music and videos that they grew up on, and Normani is no exception. The singer released her newest single on Friday, Aug. 16, and since it dropped, fans have been passionately dissecting all of the early 2000s references in Normani's "Motivation" music video.

The former Fifth Harmony member teased her new music video on Thursday, sharing a clip inspired by Beyoncé's debut solo single, "Crazy In Love," on Twitter. "Motivation at midnight !!!! So excited ahhhhhh hope you love it," Normani wrote, before hinting that her video would pay tribute to all of the artists she grew up idolizing as a child. "Y’all know I love the early 2000’s."

From the very beginning of the video — which brought viewers right back to the early aughts, watching music video countdown shows like TRL and 106 & Park in their living rooms — to the street-party choreography, Normani used her latest release to pay homage to all of the R&B queens and Pop princesses who came before her, and inspired her to become an artist in her own right. The response to the clip has been overwhelming, with artists like Ariana Grande, Ella Mai, and Kehlani sharing their love for Normani and her early aughts inspiration on social media, along with fans who have been breaking down as many references as they can spot.

With shots honoring Beyoncé and Kelly Rowland (who also released a song called "Motivation") to choreography inspired by Britney Spears and Jennifer Lopez, "Motivation" is packed with references and Easter Eggs designed to make viewers feel like they're back in the early 2000s. So, let's all break out our favorite velour tracksuit and relive the R&B videos of our childhood along with her.

Boy band fans fought to guarantee either *NSYNC or the Backstreet Boys the top spot on TRL, but for people who loved hip hop and R&B, there was no music countdown show more important than 106 & Park on BET. In the first moments of "Motivation," a young Normani runs into the living room to watch Terrence J and Rocsi name the number one video of the day ... which turns out to be Normani herself.

A lifelong fan of Beyoncé and Destiny's Child, Normani obviously had to pay tribute to the Queen Bey herself in "Motivation." With the singer rocking a white crop top, low-rise jeans and flipping her hair while walking towards the camera, you'd be forgiven if you confused Normani for Beyoncé for a moment there.

Wearing a crop top and skirt airbrushed with "1996" — Normani's birth year — and the name of her single, Normani and her girls show off their best choreography in front of the house where they hang out. The moment seems to be an homage to two iconic stars of the early aughts: the "Princess" of Murder Inc., Ashanti, who partied with her own friends in front of a house in "Happy," and Ciara, who taught the neighborhood kids how to do her signature dance in "1, 2 Step."

As Twitter user @eleven8 pointed out, the shot of Normani and her girls, in a huddle, staring down a dude walking down the street was reminiscent of Aguilera and Lil Kim's girl power anthem, "Can't Hold Us Down," which also featured the early aughts favorite street dance party.

After the dance party with her friends, Normani shows off some of her gymnastic skills on the basketball court, performing a jaw-dropping basketball twerking trick and doing a few flips across the court. These both seem to be a reference to Britney Spears' iconic "Baby One More Time" video, in which the young pop star dances on the basketball court and does her own flips and tricks.

The first of two homages to 2000s-era Jennifer Lopez, Normani's basketball court choreography is very similar to the way that J.Lo and rapper Ja Rule danced in the "I'm Real" video. All she's missing is a pink velour sweatsuit. The singer followed that up with shots of herself dancing with the Houston skyline in the background, which seemed to be a tribute to Lopez's "Jenny From the Block" video, where she honored her own hometown, the Bronx.

Dancing In The Rain

A staple of early aughts music videos was a dramatic sequence in which the singer would end up dancing in the middle of a thunder storm, usually at the climax of the video. In addition to becoming part of this time-honored tradition, some fans speculated that Normani's blinged-out ensemble was a reference to Beyoncé's Dangerously In Love cover art, while other thought it was an homage to Ciara's "Gimme Dat."

With the "Motivation" music video, Normani got to honor the artists and videos that inspired her to pursue her dreams of being a pop star, and bring fans on a trip back in time to the early 2000s — all while cementing her place in music history alongside her idols. That's a whole lot to accomplish in just under four minutes.

More like this
Cruz Beckham Teased New Music With An Adorable Nod To Mom Victoria Beckham
By Stephanie Topacio Long
Britney Spears Shares & Deletes Photos Of Justin Timberlake From 22 Years Ago
By Jake Viswanath
Zach Gilford Admits He Forgot Taylor Swift's Name When He Starred In Her Music Video
By Jake Viswanath
Twitter Can’t Believe The Madonna Biopic Is Scrapped & Fans Have A Solution
By Alyssa Lapid
Get Even More From Bustle — Sign Up For The Newsletter
From hair trends to relationship advice, our daily newsletter has everything you need to sound like a person who’s on TikTok, even if you aren’t.