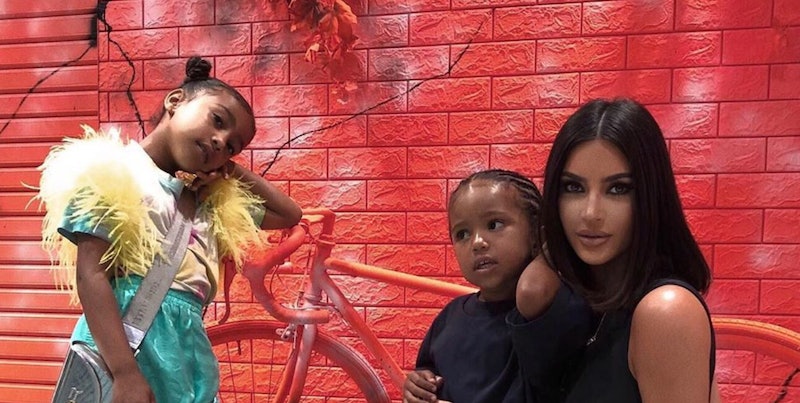 First, it was a pair of $1,700 chrome Balenciaga boots. Then it was pink and black snakeskin shoes. Now it's a practically priceless Dior bag. North West's Dior purse is more exclusive than any accessory you will likely ever own. The $35,000 silver bag is the ultimate in opulence and costs as much as your rent payment for the next several years. It also shows that Kim Kardashian West's eldest daughter has fabulous — and ridiculously expensive — taste when it comes to accessories.

North's Dior saddle bag is one of only 10 produced and Vogue basically christened it a museum-worthy collector's piece. The all-metal bag is a collaboration between Japanese artist Hajime Sorayama and the famous French design house. Rather than letting this work of art that doubles as an accessory sit tucked away in the closet or behind a glass partition, North added it to her OOTD — even if only for a photo opp.

Kardashian West shared images of North rocking the bag during the family's trip to Japan on her personal Instagram feed. In one of the shots, Kardashian West posed with North, 6, and son Saint, 3. North was rocking a feathery shrug, green pants, bright and furry mules, and the silver Dior bag slung across her torso as a crossbody. She wore her hair in two side buns and looked effortlessly and infinitely chic. Her presentation was the ultimate in street style.

Kardashian West was also seen out and about earlier this week while carrying the same bag, suggesting that she was merely lending it to North for the night or for this family portrait. Kardashian West paired the rare and hard-to-get bag with an oversized top and chunky dad sneakers.

The caption could veritably be changed to, "Oh, hey, I'm North and I'm just chilling out here with my $35,000 bag. NBD." She totally rocked it — and with such confidence. When you scroll through to the second photo, North strikes a model-worthy, over-the-shoulder pose alongside her dad Kanye West. One can't help but wonder if North will eventually carry this Dior bag with the aforementioned Balenciaga boots since they kinda match. She clearly has an eye for reflective accessories.

BTW, Saint showed off his own sense of style by matching with his mom. Both he and Kardashian West opted for all black everything and slayed their monochromatic ensembles. He may not have rocked statement accessories like his big sis but his slides were pretty darn cute.

Of course North has access to incredible fashions, since her mother has built quite a collection of enviable high-end clothing and accessories over the years.

However, this isn't the first time the Kardashian and Jenner offspring who are single digits in age have received purses with several zeroes in their price tags. Kardashian West gifted her nieces with $1,000 mini Louis Vuitton bags during the 2018 holiday season.

North has proven to be both a budding fashion icon, rocking leather jackets and Doc Martens since she was a toddler. She's also an up and coming makeup artist, having applied foundation to her mom's face in a makeup tutorial while proving heavy-handed with a beautyblender.

But North West's latest look might be her most unforgettable to date. She's a total Dior baby.