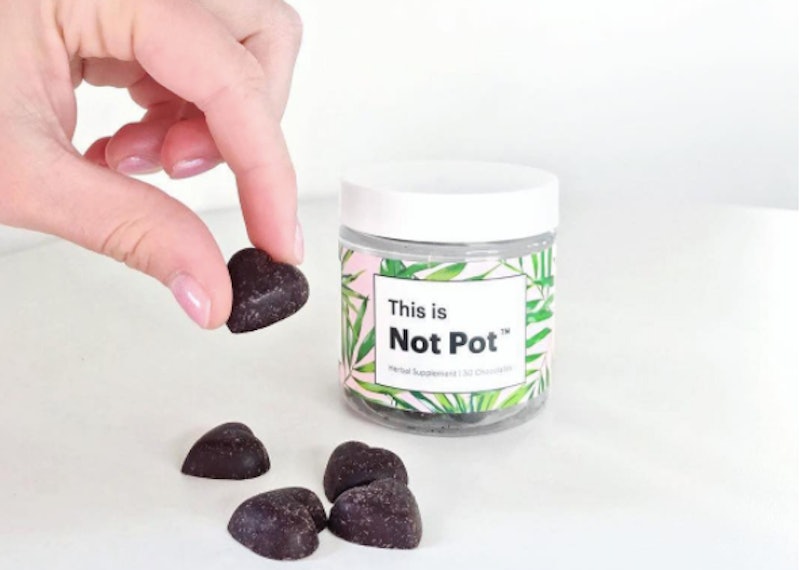 If you a) struggle with anxiety, and b) love chocolate, I have some excellent news for you: “Not Pot” chocolate is infused with cannabinoids, and it’s meant to help you manage your anxiety. Although cannabinoids aren’t necessarily gearing up to replace other anti-anxiety medications (or at least, not yet), research has shown that marijuana can reduce stress responses in regular users; Not Pot might be a low-dose and delicious way to see if it works for you. All you have to do is put in an order (they’re about $30 for a 30-day supply, or about $27 if you make it a subscription) and eat one chocolate heart a day once they arrive.

The cannabinoid in Not Pot’s chocolate hearts is cannabidiol (CBD), one that’s known for its anti-inflammatory properties and anti-anxiety effects. Note that, per Not Pot’s website, it will not get you high; CBD is non-psychoactive. (Tetrahydrocannabinol, or THC, is probably the best-known psychoactive cannabinoid, but there’s none of that in Not Pot’s offerings.) The CBD is included in the chocolate via hemp oil, which means that you don’t need a medical marijuana card or doctor's prescription in order to get a hold of Not Pot. According to POPSUGAR, each heart contains two milligrams of CBD, which is a very light dose.

Other key ingredients include raw cacao, the herb ashwagandha, and maple sugar. The raw cacao provides a kick of antioxidants, which research has found can boost the production of endorphins and serotonin, while ashwagandha, which is sometimes used in Ayurvedic, Indian, Unani, and African medicine, is believed to treat a wide variety of ailments. (It’s worth noting that there’s actually not a ton of evidence that it does anything for anxiety, but that’s one of the things those who use it believe it can help treat.) As for the maple sugar? It’s a low-glycemic sweetener, which means it won’t cause the same sugar high and subsequent crash that white sugar and high-fructose corn syrup can; however, as National Geographic points out, “low-glycemic” doesn’t necessarily mean “healthier.” (Then again, we’re talking about chocolate here, which — no matter which way you slice it — is candy. Either way, though: Eat what you want, whenever you want. Full stop.)

So, do they work? POPSUGAR’s Dominique Astorino found that she and another POPSUGAR editor, Brinton Parker, each needed to eat about three chocolate hearts before they felt anything. “Once we felt them, it was exceptionally relaxing,” Astorino said. Note, though, that according to Not Pot, the hearts are meant to be taken one a day (not three), allowing the effects to build up over time. For what it's worth, one reviewer at Not Pot’s website said that he “felt calmer in a week’s time” and that it “helped [my] insomnia”; meanwhile, another lauded it for being “something I could bring through TSA to help with my pre-flight anxiety.”

Worth noting: Not Pot does write on their website, “These statements have not been evaluated by the Food and Drug Administration.” Additionally, they state, “This product is not intended to diagnose, treat, cure, or prevent any disease.”

(Did I mention the jars come with stickers? Because they do. They stickers are designed by artist Abby Jame. Just FYI.)

Not Pot is, of course, far from the only company producing cannabinoid chocolate; a company called Défoncé has been making waves in recent years for its high-end edibles, which come in a variety of flavors and are packaged in some really luxe-looking wrappers. However, Défoncé uses THC — 180 mg per bar, with each bar consisting of 18 segments containing 10 mg each — so unlike Not Pot, a) it contains a psychoactive cannabinoid, and b) you’ll need a medical cannabis card to get it. Also, it’s pretty much only available in California, so unless that’s where you live, you’re out of luck.

Not Pot, however, can be ordered online and delivered right to your door. Think it might be worth a shot? Give it a try, or chat about it with your therapist if you have one and see if it might be right for you. And, hey, bonus: According to Astorino, "They taste just like dessert."