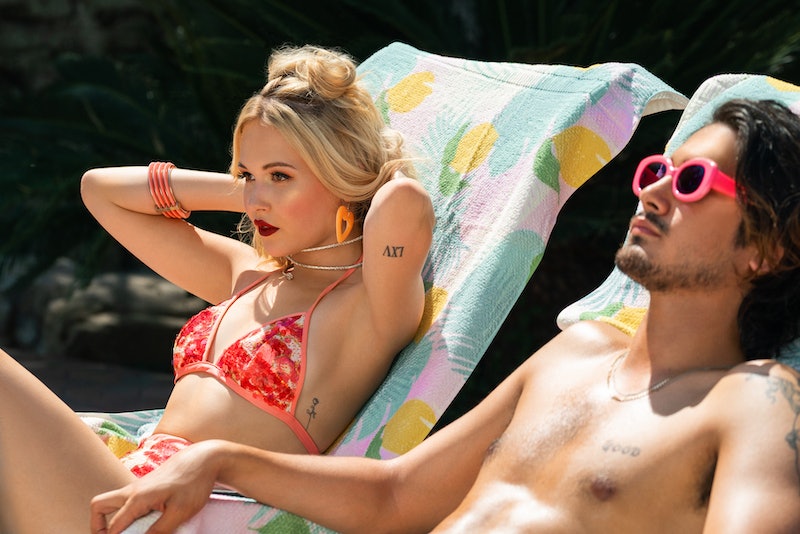 Created by Greg Araki and co-written by Karley Sciortino, Now Apocalypse is breaking new ground when it comes to portraying sex-positive millennials in a nuanced way (sex lizards and the apocalypse aside, of course). But all of the surreal and exaggerated aspects of the show aside, the series still manages to feel true to life in its depiction of sex habits among young people. While the series is mostly centered around Avan Jogia's character who experiences weird premonitions about the end of the world, its Now Apocalypse's treatment of sex work that feels the most new.

One of the main characters, Carley (played by Kelli Burgland) is a cams for a living, but that's hardly the central focus of her character, nor is it a vehicle for her to learn some "valuable" lesson at the end of the day like it can be in other media. She's up front with her friend Ulysses about what she's been doing to earn extra money, although she isn't quite ready to share it with her boyfriend Jethro.

It might not seem like such a groundbreaking distinction, but it shows that Carley herself isn't ashamed of her side gig, but she's also aware of the stigma that still goes along with it and that in the wrong hands, the information could make her vulnerable to attacks on her character, abuse, or other sorts of shaming, something actual sex workers face all the time.

Whether they're sexual objects like the prostitutes in Game of Thrones, or distressed damsels in need of saving like in Pretty Woman and Milk Money, it's rare to see female sex workers appear on screen when their occupation isn't the defining point of their story. Speaking to Bustle about creating the character of Carley, Sciortino says that it was important to her to not portray Carley as "two-dimensional" or like a "traumatized victim sex worker," she says, given that they are the stereotypes mainstream television and movies seem to rely on.

Sciortino also explained that she took some inspiration for Carley's character from the experiences of real women that she got to know while creating her Viceland webseries, Slutever. "We did one of our first episodes of Slutever about "cam girls," so I had spent a lot of time with these different women who worked in that industry," she explained. "Some of the women were independent cam girls, and other girls worked at cam girl studios. I just found those girls really interesting. So part of the reason why the character in the show ended up a cam girl is because I felt like there was a lot of stuff to explore in that department, you know?"

Now Apocalypse gives Carley's job the right amount of attention and respect it deserves, but also doesn't make it the focal point of the rest of the action. That in and of itself makes a change from most plot lines involving sex workers on TV and in movies. As the show moves forward, more television and film creators would be wise to take note and follow suit.