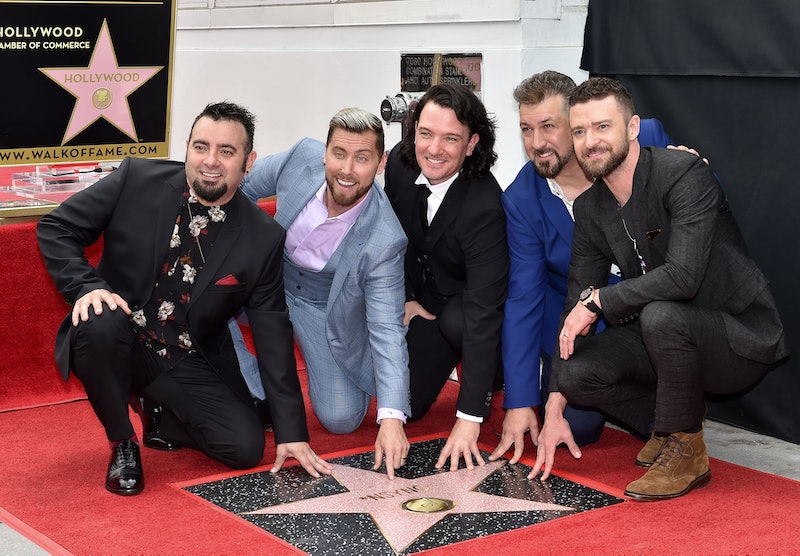 Coronavirus might be forcing us into our homes, but the silver lining is that it's bringing one of our favorite 2000s boy bands back together. *NSYNC is having virtual reunions — including Justin Timberlake — on Zoom, as band member Lance Bass revealed on Tuesday, April 7. The only disappointing part of this new development is that we're not invited to the party — yet.

During his appearance on Watch What Happens Live With Andy Cohen (from home), Bass talked about having Timberlake on his podcast and reminiscing about his time in the band. "I wasn't surprised he wanted to do it," he said of his bandmate. "We loved it. I thought it was fun. I heard a lot of things for the first time coming out of Justin's mouth about *NSYNC. He doesn't really talk about *NSYNC too much, but it was great to hear his perspective."

Indeed, Timberlake has refrained from publicly mentioning or reuniting with his former boy band, even when Bass, JC Chasez, Joey Fatone, and Chris Kirkpatrick all appeared onstage with Ariana Grande at Coachella, which made fans urge the boy band to tour with or without Timberlake. But now it seems they may not have to reunite without him.

Bass said that his interview with Timberlake reignited their relationship and "kind of bonded us even more." And ironically, it seems like the band members' forced self-quarantines are bringing them all together for once, beyond their confirmed group chat. "Especially during this quarantine, your relationships, they get tighter," Bass said. "Now we have happy hours every week together on Zoom, which is really fun." And yes, Timberlake participates in them. "I'm bringing people together, Andy," he quipped to host Cohen.

On The Daily Podcast with Lance Bass, Timberlake made it clear that he would like to "get together and talk" with his bandmates about a potential *NSYNC reunion. The fivesome did appear at *NSYNC's Hollywood Walk of Fame induction ceremony last April, but the last time they all sang together was at the 2013 Video Music Awards during Timberlake's Video Vanguard Award performance. So basically, if anything good is going to come out of quarantine, it's this long-awaited reunion tour.