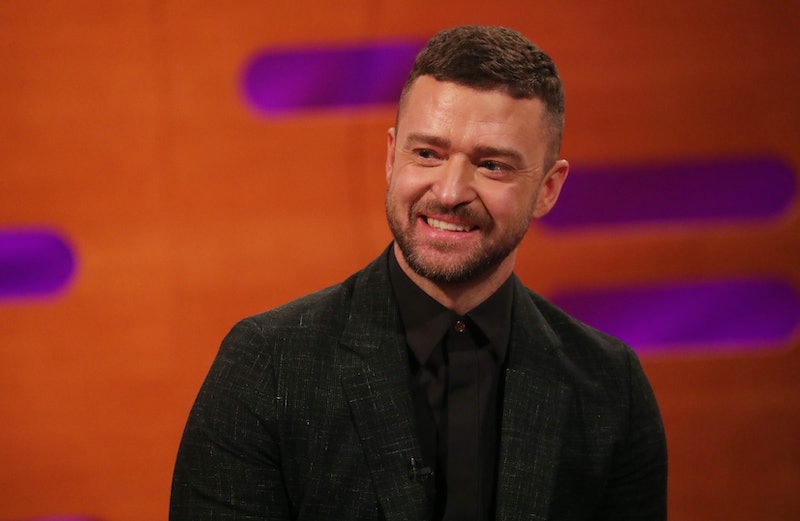 It looks like *NSYNC may not be saying "bye bye bye" after all, even as a five-piece. Justin Timberlake is open to an *NSYNC reunion, and that news alone is enough to get fans through social distancing. The former boy bander made the revelation during an appearance on bandmate Lance Bass' podcast The Daily Popcast. And his statements just made the chances of them reuniting with JC Chasez, Joey Fatone, and Chris Kirkpatrick once again have gone up tenfold.

During the interview, Timberlake and Bass confirmed that the bandmates were in contact with each other on an "ongoing group chat." And, as reported by PEOPLE, Timberlake also said that he hopes to "get together and talk" with his bandmates about a potential proper reunion.

Considering that he didn't join Bass, Chasez, Fatone, and Kirkpatrick when they reunited *NSYNC during Ariana Grande's Coachella performance in April of 2019, which made fans encourage the boy band to reunite with or without JT, this feels like a major breakthrough. Even the Backstreet Boys want to see them reunite (and go on tour with them).

*NSYNC did reunite as a fivesome that April, however, when the band received a star on the Hollywood Walk of Fame. Before that, their last public reunion was during Timberlake's Video Vanguard performance at the 2013 Video Music Awards. So, needless to say, it's been way too long.

Elsewhere on the podcast, Timberlake came to the defense of his and Britney Spears' iconic couple denim outfits they rocked at the 2001 American Music Awards. And yes, he realizes the impact of the trend they set. “You can kind of rock that one today,” he said, which is a valid argument considering that the "yeehaw" craze of 2019 also crossed over into denim fashion.

Bass agreed that "denim on denim is kind of popular," but stood firm in his believe that it still shouldn't be worn to a major event. Timberlake's response? “You do a lot of things when you’re young and in love,” he said. If a reunion tour doesn't count as a major event in Bass' mind, perhaps the boy band will be sporting double denim onstage one day. It's what we deserve.