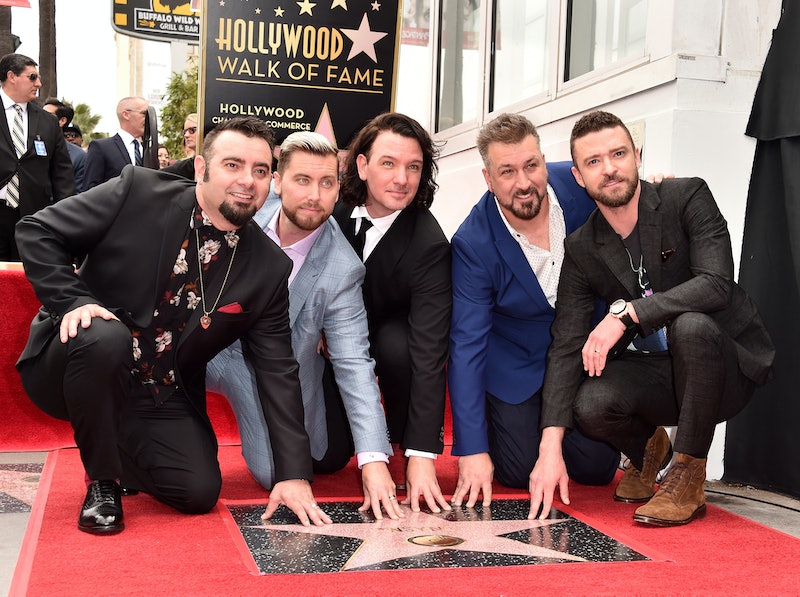 Do you ever sit in your room, reminiscing about the days when you'd rewatch the "Bye Bye Bye" music video over and over again, trying to learn the chorus' dance moves? Or blast "Tearin' Up My Heart" in the car until your mom told you to stop? And do you wish you could see *NSYNC in concert, at least one more time? Well, there's some good news coming your way, and you might want to sit down. Lance Bass confirmed *NSYNC is talking about a reunion, so you better make sure you just got paid so that you can partake in whatever it might be.

In an interview with Variety published on June 10, Bass addressed the many reunion rumors and how the band is going to respond to them. “We haven’t talked about what the next step is but I know we’ll sit down during the summer together and figure it out,” Bass said.

This sounds promising, but don't get your hopes up too high for an actual tour, because Bass did call their epic Coachella performance with Ariana Grande “definitely a one-off." However, he also noted that "there are many, many things coming across our desk because of Coachella that we would be stupid not to discuss and look at." For the hopes of the fans, hopefully something does come of these meetings. And as much as merch like *NSYNC wine glasses and doormats are cute, hopefully it's a little more substantial than that, too.

*NSYNC's 2019 Coachella performance with Ariana Grande was their first since the boy band's mini reunion at Justin Timberlake's 2013 VMA Video Vanguard honoree performance. They also celebrated their Hollywood Walk of Fame star in 2018 together.

And even though Timberlake wasn't able to attend the Coachella reunion, Bass said it was still a major moment for the beloved group. “Coachella was incredible and it was a big moment for ‘NSYNC,” he told Variety. “We hadn’t performed that song ('Tearin’ Up My Heart') with that choreography since 1998, so when Ariana told us she wanted to do that song, we were like, ‘We have to re-learn that thing.’ It’s amazing how the moves and harmonies came back so quickly.” He also noted that people are really into nostalgia, so rest assured, he knows just how successful an *NSYNC reunion could be.

Joey Fatone has also talked about a possible reunion post-Coachella, though he admitted it would be strange to contemplate getting *NSYNC back together without Timberlake. “We have to have the conversation, even without Justin. The whole thing about it is it’s really awkward. It’s not awkward, but it’s weird,” he said to Us Weekly on June 2. “People will be like, ‘If Justin doesn’t do it, the group’s not gonna do it.’ That wasn’t even the case. That’s not even the conversation. Everyone’s heads are in different times and different places in our lives." Fatone added that the band hadn't yet talked about the possibility of a reunion, saying, it's a "never say never" situation right now.

Whether they go on a reunion tour (which would be successful, no doubt), or just do some sort of TV special, or mini residency, fans will be delighted to see their fave boy band back together again.