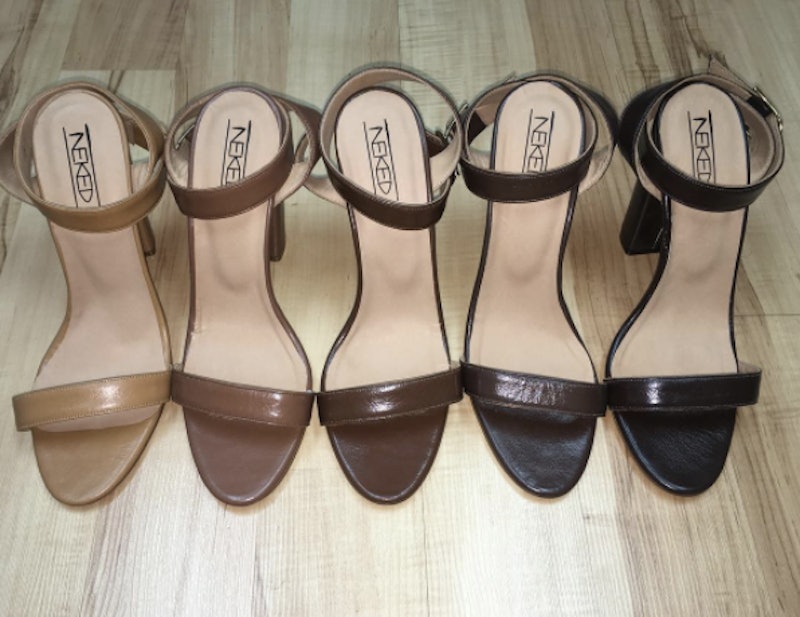 Finding a nude shoe to match your skintone is almost as difficult as finding the perfect concealer shade. Except you have a little leeway with shoes, because no one expects shoes to blend in flawlessly with your skin. Until recently, nude shoes for darker skintones just didn't exist, but now, British brand Kahmune is seeking to change that.

After consistently seeing only a light "nude" shades offered, Kahmune founder Jamela Acheampong decided to do something about it. "My Dad has always said that some of the best business ideas are the ones that solve a problem," Acheampong said in an interview with Allure. "The fact that the term 'nude' is attributed to a specific shade is a problem."

To solve this problem, Acheampong launched Kahmune, a luxury shoe brand that offers pumps and strappy heels in 10 different "nude" shades, from a very fair hue to a deep brown. Acheampong spent a lot of time deciding on the 10 shades offered in her collection, and narrowing them down was not a simple task.

"Settling on just 10 colors was no easy feat—I don't think people realize the amount of diversity found in skin pigments," Acheampong explained to Elle. "I found a few brands that were doing five or eight shades, but I didn't think that was enough."

Kahmune's mission and shoe collection have quickly grabbed the attention of the media, but the inclusive shoes are not yet on the market. The heels will retail for $200-250 and you can preorder a pair as soon as February.

Hopefully smaller brands like Kahmune will inspire popular designers and brands to expand their "nude" offering beyond a light shade.

More like this
How To Get Your Hands On The Pat McGrath X Supreme Nail Kit
By Justine Knight
17 Brilliant Beauty Advent Calendars You’ll Want To Snap Up For Christmas 2022
By Justine Knight
Genius T.J.Maxx Shopping Hacks For Sales On (Almost) Everything
By Kelsey Stiegman
10 Corsets That *Actually* Work For Big Boobs
By Bella Gerard
Get Even More From Bustle — Sign Up For The Newsletter