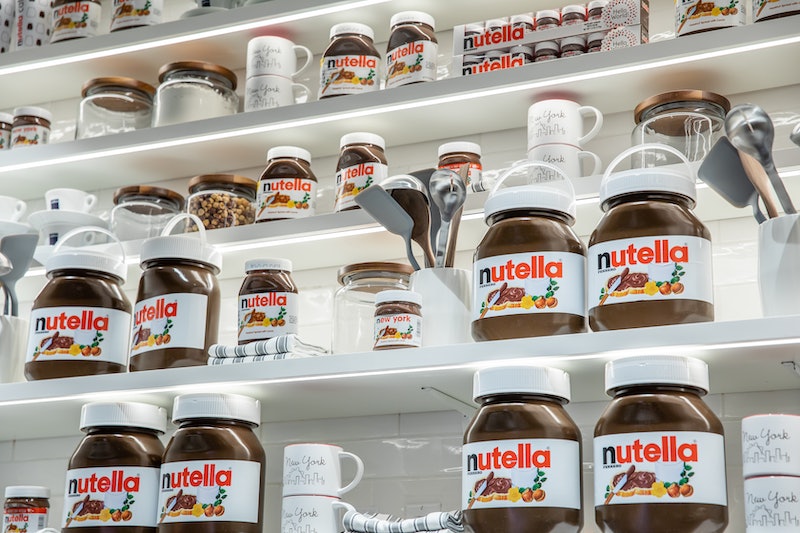 There is a Day for everything at this point, and, of course, that includes a certain chocolate hazelnut spread. World Nutella Day is Tuesday, February 5, and in honor of the occasion, Nutella is giving away free jars. But, while you can celebrate World Nutella Day wherever you are (all you need is yourself, Nutella, and determination), the free Nutella is only available in two cities: Chicago and New York.

If you live in or near Chicago or New York — and if you're still reading this, I'm going to assume you do — then congrats! Free Nutella can be yours if you go to the right place at the right time. The Nutella Cafés (oh yes, there is such a thing) in both cities will give away personalized Nutella jars inscribed with their names to the first 100 people who arrive when it opens at 7 a.m. After that, the cafés will give a complimentary jar of Nutella to the next 400 customers with the purchase of any menu item.

In addition to this giveaway, the Nutella Cafés will also have some other new additions. The New York City location will launch "an interactive DIY demonstration station to show fans how to make their own Nutella Cafe favorites right at home." There will also be an exclusive to World Nutella Day recipe being made: Mandarin Cup with Crumble and Nutella. What does that look like, exactly? You'd have to go to find out. As for Chicago, that location will start featuring personalized Nutella jars (for purchase, not just those free ones) on Tuesday after they became popular at the New York store.

World Nutella Day began in 2007 and was, surprisingly, created by a Nutella fan and not by the company itself as a promotion. The "holiday" was invented by a blogger named Sara Rosso, according to the official World Nutella Day site. It caught on with other people who love the spread, and, in 2015, "Sara transferred World Nutella Day to Ferrero (the makers of Nutella) to help it live on and grow for years to come."

The Nutella Cafés are more recent additions. The Chicago one opened first in May 2017, and the New York location opened its doors in November 2018. As the name suggests, Nutella Cafés are cafés with menu items made out of Nutella. And the menu is pretty wide ranging: Nutella breakfasts, Nutella deserts, Nutella crepes, Nutella gelato, Nutella baked goods, a Nutella make-your-own Nutella food station, Nutella drizzle-topped coffee.

In addition to the in-eat menu, the cafés also stock Nutella goods, which is where the personalized Nutella jars come in. The café will print out a label for a Nutella jar with your name on it, instead of "Nutella", in that signature red and black font. This is what those first 100 people will get on Tuesday morning, so if you want one (and don't want to pay for it) make sure to get there bright and early.