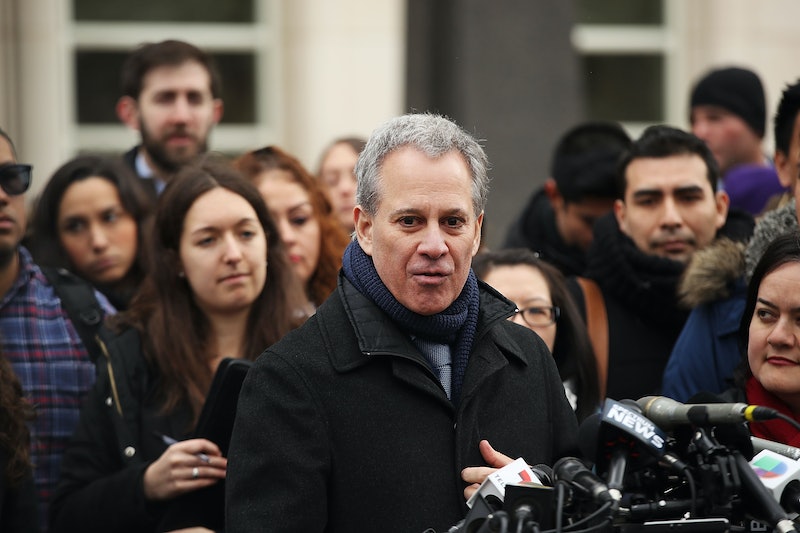 On Monday evening, abuse allegations surfaced against the man who once sued Harvey Weinstein and advocated for the #MeToo movement. And just hours after The New Yorker published the allegations, New York Attorney General Eric Schneiderman resigned from his position. He, however, has denied the allegations.

His resignation statement, The New York Times reported, emphasizes that he still strongly contests the claims:

It’s been my great honor and privilege to serve as attorney general for the people of the State of New York. In the last several hours, serious allegations, which I strongly contest, have been made against me.

While these allegations are unrelated to my professional conduct or the operations of the office, they will effectively prevent me from leading the office’s work at this critical time. I therefore resign my office, effective at the close of business on May 8, 2018.

And when the initial report came out, Schneiderman also denied the women's claims, telling The New Yorker,

In the privacy of intimate relationships, I have engaged in role-playing and other consensual sexual activity. I have not assaulted anyone. I have never engaged in nonconsensual sex, which is a line I would not cross.

The news of the allegations come as a real blow, especially because of the way Schneiderman consistently portrayed himself as a feminist.

One of his tweets from National Women's Day 2017 sums up what he said he stood for as attorney general: "I am a proud feminist and I am committed to using the privilege of my office to advance equality—as every elected official should be."

And in February 2018, Schneiderman filed a lawsuit against Harvey Weinstein and his New York City-based company, claiming that it "repeatedly broke New York law by failing to protect its employees from pervasive sexual harassment, intimidation and discrimination."

"We are disappointed that the New York Attorney General felt it necessary to file today's complaint," the company responded, according to CBS News. "Many of the allegations relating to the Board are inaccurate and the Board looks forward to bringing the facts to light as part of its ongoing commitment to resolve this difficult situation in the most appropriate way."

And as The New Yorker mentioned, Schneiderman congratulated both that outlet and The New York Times after they took home a Pulitzer Prize for their #MeToo coverage, calling it a "well-deserved honor." He added, via tweet, that there would have been no reckoning without the "brave women and men who spoke up about the sexual harassment they endured at the hands of powerful men." Now, following the allegations, those words are coming back to haunt him.

Four women who claimed to have been with him romantically over the years allege he physically abused them, and two of them say he threatened to kill them if they left him. Michelle Manning Barish, one of the two women who disclosed her name to The New Yorker, told the outlet, “You cannot be a champion of women when you are hitting them and choking them in bed, and saying to them, ‘You’re a f*cking whore.’” Schneiderman's representative denied this, according to the report.

"No one is above the law, including New York's top legal officer," Cuomo said, according to The Hill. "I will be asking the appropriate New York District Attorney(s) to commence an immediate investigation and proceed as the facts merit."