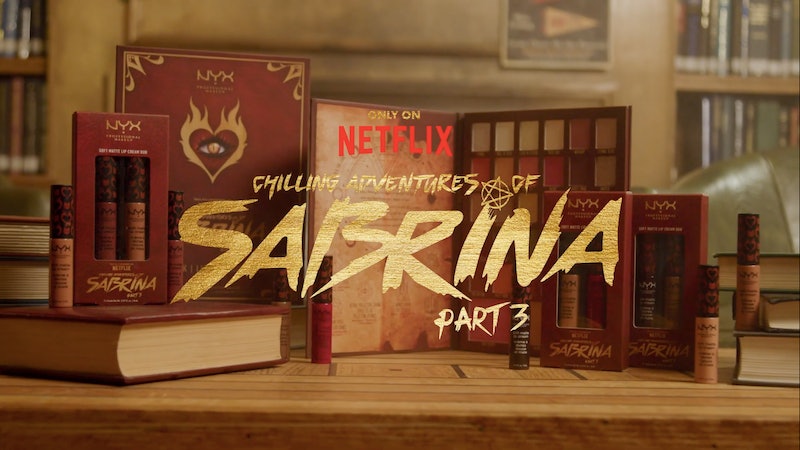 Affordable beauty brand NYX has teamed up with Netflix to release a specially curated collection of products all inspired by the latest version of Sabrina. The streaming platform's original series is a vastly different take than the '90s era Melissa Joan Hart version, and the new makeup collection certainly reflects its tilt toward the darker side of magic.

Inside the new NYX x Sabrina collection, viewers of the show will find an eyeshadow palette brilliantly designed to look like a spell book that even features shadow combinations to use as charms. The palette isn't just home to 30 eyeshadows, either. It also features two blushes and a highlighter.

In addition to the collection of shadows, the makeup brand and series collab features three different lip duos in the brand's beloved Soft Matte Lip Cream formula. As for the prices, the palette retails for $35 while the lip duos costs $14 each. All items in the collection are up for grabs now on the NYX website and at Ulta.

In an IGTV video uploaded to the brand's feed, makeup designer for the series Candice Stafford-Bridge explains the inspiration for the collection. According to the artist, the collection was, in fact, used on the set of Sabrina — though she could't name the episode — and the hues were inspired by spring. She says in the video, "I think this season you'll get to see a lot ore of the makeup. When we're outside, it'll be brighter and in some of the interior scenes it'll be brighter so you'll get to see a lot more."

Stafford-Bridge also tells fans that the colors found in the collection were used to signify characters' arc in the upcoming season of The Chilling Adventures of Sabrina. "A lot of our characters are developing whether they're going to the dark side, not that I want to give any spoilers away," she says in the video. "So we're starting to see some changes in some of our women, and with that, we get to advance their makeup and play more. It'll be really fun."

If you want to get the witchy vibes going before the series' third season premieres on Jan. 24, snag the NYX x Sabrina collection now for some chillingly good makeup looks.