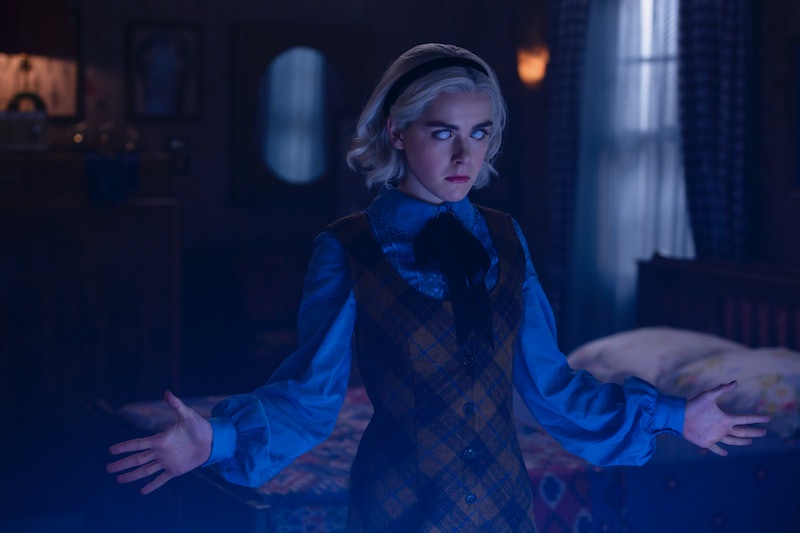 This article contains spoilers for Part 2 of The Chilling Adventures of Sabrina. The Church of Night is getting ready to rise once again. During a panel at Argentina Comic Con on Saturday, December 7, Netflix announced The Chilling Adventures of Sabrina Part 3 premiere date, with Sabrina (Kiernan Shipka), the Spellman family and the "Fright Club" set to return to the streaming service on January 24. According to a press release obtained by Bustle, the upcoming season will pick up the shocking cliffhanger of Part 2, with Sabrina determined to rescue her boyfriend, Nick Scratch (Gavin Leatherwood) from eternal damnation, after he sacrificed himself to become the vessel to imprison Lucifer.

"Sabrina can't live with herself, knowing that Nick made the ultimate sacrifice and is suffering, burning in Hell under Madam Satan (Michelle Gomez)’s watchful eye," the press release reads. The teenage spell caster will recruit her mortal best friends — now named the "Fright Club" — to help free Nick from Hell and his eternal punishment. Sabrina's journey into the underworld is teased as part of Netflix' big announcement, with Shipka's character wearing a red cloak and emerging from darkness and mist as a creepy voice welcomes fans to Hell.

Meanwhile, the Coven's decision to "unseat" the Dark Lord as their leader leaves the Church of Night in chaos, and "and, with no one on the throne, Sabrina must assume the title of 'Queen' to defend it against a challenger, the handsome Prince of Hell, Caliban." Throw in a creepy carnival, a group of pagans who want to resurrect some kind of evil force and general teenage angst, and it looks like Part 3 will be Sabrina's most chilling adventure yet.

However, it won't all be doom and gloom in Part 3, as the show's creator, Roberto Aguirre-Sacasa told The Wrap back in August that despite the main characters going to hell, "It’s very fun. It’s very fun. It’s dangerous, but it’s really fun." Thankfully, the youngest Spellman won't be alone as she makes her way down below, and she'll have her best friends — Harvey (Ross Lynch), Roz (Jaz Sinclair) and Theo (Lachlan Watson) — by her side.

"Sabrina's a pretty tough cookie. It doesn't take her long to figure out there's a back door to Hell," Aguirre-Sacasa told TV Insider in July. "So the Fright Club (Sabrina, Harvey, Roz and Theo) goes on an epic quest to rescue Nick that is not dissimilar to a horror version of The Wizard of Oz." In the same interview, Aguirre-Sacasa seemed to hint that Prince Caliban could cause some issues in the show's existing relationships. "Another handsome young man — let's call him a prince — who arrives to turn the witches' heads," the showrunner said at the time.

As for the main love triangle at the center of the show, Aguirre-Sacasa told The Wrap that either Harvey or Nick could eventually win Sabrina's heart on the Chilling Adventures of Sabrina. "It’s funny, I love both those guys," he told the outlet. "I think probably, I ship both couples. I have a soft spot for Harvey because he’s Sabrina’s longtime boyfriend in the comic books, but I cannot deny that Sabrina and Nick are a great, potent match. So yes, there is reason to hope for Harvey and Sabrina shippers. But Sabrina and Nick are pretty undeniable."

While the return of #Habrina is still a possibility, Aguirre-Sacasa did admit that it's unlikely that Part 3 will bring the Chilling Adventures of Sabrina and Riverdale crossover fans have been hoping for. "I’m so open for it and it feels like we have conversation about it all the time," the writer admitted. However, while he "would love for it to happen," it's more likely that Riverdale characters will appear on the upcoming Katy Keene spinoff, "just because it’s on the same network and we’re sharing cast."

Whether or not the residents of Riverdale make their way over to Greendale — or even into Hell — it's clear that The Chilling Adventures of Sabrina will have plenty more thrills and chills for audiences when Part 3 premieres on Jan. 24.

More like this
'Bridgerton' S3 Teases Exciting Social Season For Penelope Featherington
By Bustle
The First Trailer For 'That '90s Show' Includes So Many Nods To The Original Series
By Jack Irvin, Alyssa Lapid and Grace Wehniainen
The 'Firefly Lane' Book Ending Teases Way More Tears To Come In 2023
By K.W. Colyard
Everything You Need To Know About Blood & Water S3
By Maxine Harrison
Get Even More From Bustle — Sign Up For The Newsletter