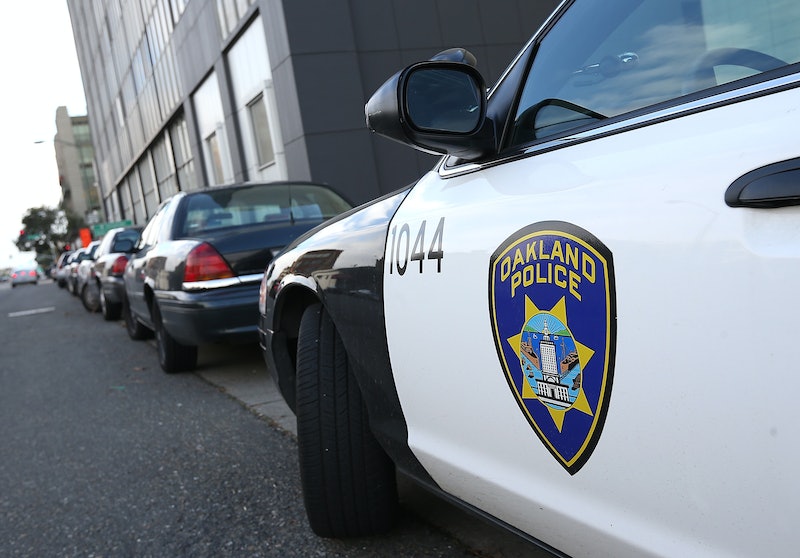 The mayor of Oakland, California, has called for an immediate end to the Oakland Police Department asking applicants about sexual assault they may have faced in the past. According to an investigative report published by The San Francisco Chronicle on Sunday, the Oakland Police Department had reportedly required police recruits to disclose if they had been sexually assaulted.

The policy, according to The San Francisco Chronicle, dated back to "at least 2011." Bustle has contacted the Oakland Police Department for comment.

In a statement on Sunday, Democratic Mayor Libby Schaaf said, "Today I ordered the immediate removal of a waiver where OPD applicants authorize the release of confidential records, including those that would disclose whether they are victims of sexual assault."

The mayor also stated, "Additionally, I directed the department to partner with the Oakland Police Commission to conduct a top-to-bottom review of the department’s recruitment and hiring process to ensure no other barriers discourage the hiring of women or minority applicants."

The San Francisco Chronicle report noted that the practice was not common in other parts of California; the paper had reviewed hiring practices in 10 police departments across the state. Penny Harrington, the former police chief of Portland, Oregon, told the publication that the policy was "inexcusable."

Harrington, who was the first woman to lead a police department in the United States, added, "There's absolutely no reason to be doing that. I can't imagine why they would need to know the information, except as a way to wash out women."

According to The San Francisco Chronicle, job applicants for the Oakland Police Department had been required to sign a release form. The form, published by the newspaper, said, "As an applicant for a position of Police Officer with the Oakland Police Department, I am required to furnish information for use in determining my suitability for employment and I may not be considered without it."

Any official carrying the signed document would then have the freedom to "obtain any and all information that you may have concerning me, including information of a confidential or privileged nature," according to the document.

When asked by The San Francisco Chronicle as to why an applicant should be required to disclose such private information, Oakland Police Department officials said that they sought to review any police reports possibly mentioning the recruit.

The news about the Oakland Police Department and its reported hiring practice, however, seems to be a recurring issue for officials. In the past, Oakland Councilwoman Rebecca Kaplan called for reviewing and possibly changing the internal recruiting policy as a way to make it more welcoming for women and people of color. According to The East Bay Times, Kaplan also noted that an applicant's prior usage of marijuana or their student debt should not limit their chance of employment.

Kaplan told the newspaper, "I think the message by which officers have been recruited and the screening process both are flawed. It seems they are not being asked about their attitudes regarding respectful treatment of women and sexual misconduct."