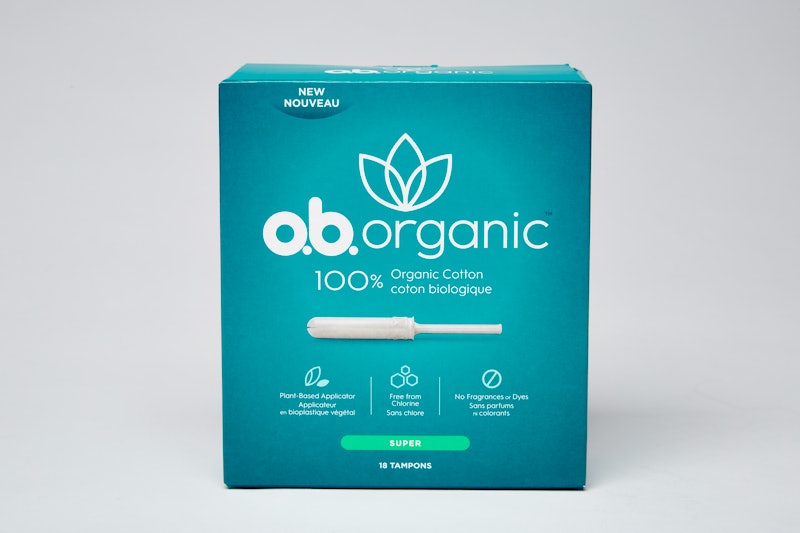 Menstruators are getting another eco-friendly period product to choose from now that o.b. has released a plant-based applicator, the company told Bustle in an email. Along with its new 100 percent certified organic tampon, the company now has an applicator that is made from up to 92 percent renewable sources, the company told Bustle. Like all of its tampons, you can choose to use o.b.’s new organic tampons with or without the new plant-based applicators, the company said, which are available now pretty much everywhere, including mass retailers, grocery stores, drug stores, and Amazon.

"Our Tru-Comfort™ applicator is 92 percent plant-based and is made primarily from sugarcane, a renewable resource," Devon Driscoll, brand manager at Edgewell Personal Care, o.b.'s parent company, tells Bustle via email. "The remaining 8 percent is made up of materials used in the manufacturing of traditional plastics and has been deemed safe by the FDA when used as instructed." Though these applicators still need to be disposed of in your traditional waste bin, using sugarcane has the potential to reduce the resources needed to produce these applicators, compared to conventional ones. The new tampons are made from 100 percent certified organic cotton, and retail for $6.99 for an 18 count with applicators, and the same price for a 24 count without applicators.

Reducing our reliance on single-use plastics has garnered a lot of attention over the last couple of years, but period products aren’t usually a part of the conversation. According to a 2019 report published in the journal Sustainability, more than 100 million menstruators use tampons across the globe, with each person using around 11,000 tampons on average in their lifetime. Tampons are supposed to biodegrade within about six months because they’re made typically of cotton, the report says, but since most actually contain some plastic and are often also wrapped in plastic, it can take much longer than that for them to break down.

"While we’ve always believed that the best applicator is no applicator at all, we also know a lot of women prefer to use an applicator," Driscoll says. "o.b. has been the original progressive choice in feminine care for nearly 70 years and we’re committed to introducing more sustainable feminine care products."

And the more sustainable options, the better. Disposable period products don’t always make it into landfills, the report says. Plastic tampon applicators can end up in oceans and on beaches, where animals try to eat them, according to the report. When exposed to light, the report says plastic tampon applicators also break down into microplastics that are five millimeters or smaller, which can be dangerous to both animals and humans.

Menstrual pads don’t fair much better. Although pads are the most favored period products around the world, they can sometimes be made of up to 90 percent plastic, “containing as much as four supermarket bags,” BBC News reports. And even though many period products come with warnings that they can’t be flushed down the toilet, says BBC News, water companies spent tons of money clearing blockages from flushed period products every year.

But the period-product landscape is changing, and consumers are showing more interest in eco-friendly options. Internet searches for different reusable menstrual products has increased, and major retailers have started to sell menstrual cups in addition to pads and tampons, BBC News reports. And there are so many more eco-friendly period products to choose from than there used to be. Menstruators are starting to be much more discerning about what goes into their period products, and “analysts have said that growing concern over the environment is one of the factors behind the increased interest in reusable period products,” Lora Jones wrote for BBC News.

As single-use plastics continues to be a topic of concern, period products will undoubtedly become a greater part of the conversation. And with o.b.’s new plant-based applicators now on the market, menstruators have yet another option to help them choose how to manage their periods in a more environmentally friendly way.