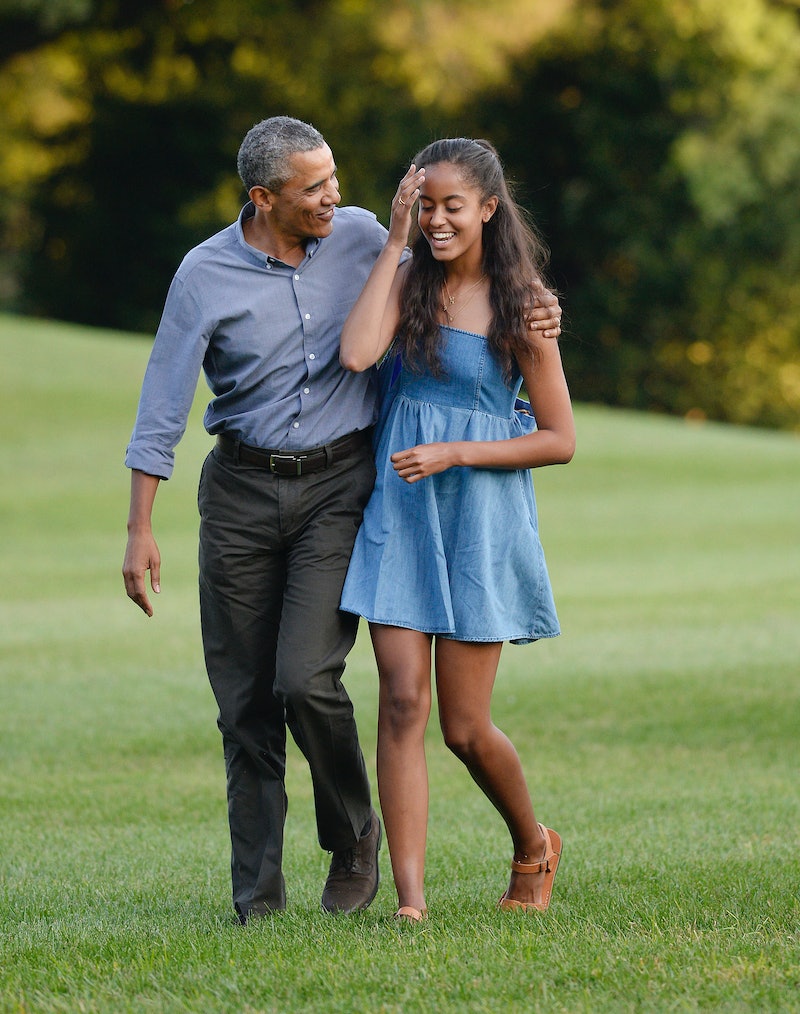 Remember former President Barack Obama? It might feel like ages ago since he and his family were the residents of the White House, as chaotic as things have often felt since. But the Obamas were the First Family of the United States just a little more than nine months ago, before they departed from public life. And on Monday, the former president himself shared a short, emotional anecdote ― Obama talked about how Malia leaving for college gave him some serious feelings, causing him to choke up in the presence of his Secret Service detail.

Malia Obama, the eldest daughter of Barack and former first lady Michelle Obama, is currently attending Harvard University, having enrolled there as a freshman this year. It was widely reported when she first moved into the dorms, even as she's reportedly been eager to keep a low-profile during her collegiate career.

Her dad, however, put her on blast in at least one way this week, telling the story of his tearful goodbye after taking her to the Harvard campus to settle in. Here's what he told the assembled crowd, describing the process of seeing his daughter off, rather dramatically, as being "like open-heart surgery."

I dropped off Malia at college, and I was saying to Joe and Jill that it was a little bit like open-heart surgery. And I was proud that I did not cry in front of her, but on the way back, the Secret Service was looking straight ahead, pretending they weren't hearing me and my sniffling as I blew my nose. It was rough.

"And it's a reminder that at the end of our lives, whatever else we've accomplished, the thing that we'll remember are the joys that our children ― and hopefully way later, our grandchildren ― bring us," Obama continued. "Holding their hand, swinging on a swing, Listening to them talk about what had happened in school. Simple stuff, but ultimately that's what matters."

Obama was speaking at an event at the Beau Biden Foundation for the Protection of Children, an organization founded by former vice president Joe Biden and his wife Dr. Jill Biden, and named after Joe's late son, who lost his life to brain cancer in 2015. Obama delivered a eulogy at the funeral, and the foundation was launched earlier this year, to great fanfare.

Obama has long been willing to publicly comment on his relationship with his daughters, though this is the first time he's commented on Malia's departure to Harvard. His comments somewhat echo those of former president Bill Clinton, who spoke during his 2016 DNC speech about the emotional process of he and Hillary seeing their daughter Chelsea off to college at Stanford in 1997.

I'll never forget moving her into her dorm room at Stanford. It would have been a great little reality flick. There I was in a trance just staring out the window trying not to cry, and there was Hillary on her hands and knees desperately looking for one more drawer to put that liner paper in.

Even powerful heads of state, suffice to say, end up grappling with their emotions when a child heads off to a university, or moves out of their family home, or departs for whatever new chapter of their life is ahead of them. In the case of the Obamas, this is a sting that Barack and Michelle are due to feel twice, too ― while Malia is 19 and already attending university (following a gap year after graduating high school), their youngest daughter Sasha is just 16, and still in Washington, D.C. attending Sidwell Friends high school.