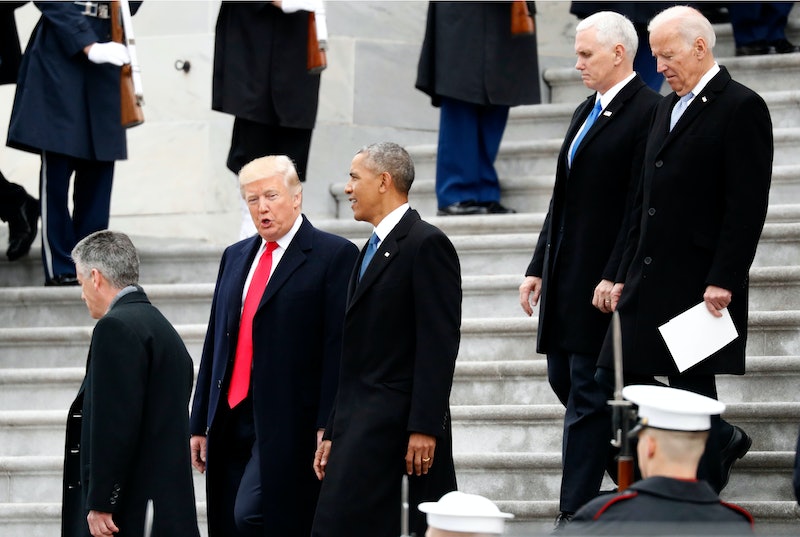 Every president serves alongside a vice president, but they don't always get along. The relationship between those who occupy the positions has long been a source of public fascination, and you can tell a lot about that relationship by looking how they speak about each other. Needless to say, Donald Trump talks about Mike Pence much differently than how Barack Obama speaks of Joe Biden.

Although the friendship between Obama and Biden was reportedly slow to develop, it was clearly rock-solid by the time the two left the White House. Both men regularly refer to each other as "my brother," and it's clear that they forged much more than just a working relationship during the eight years of Obama's presidency.

"You were the first choice I made as a nominee, and the best," Obama said of Biden in his final speech as president. "Not just because you have been a great vice president, but because in the bargain, I gained a brother. We love you and Jill like family, and your friendship has been one of the great joys of our life."

Obama has called Biden "the best vice president America’s ever had," and in the last days of his presidency, awarded him the Presidential Medal of Freedom. At that ceremony, he spoke effusively and at length about Biden's policy achievements, called him a "lion of American history," and said that Biden's "candid honest council has made me a better president and a better commander in chief."

"He’s not just a great vice president, he is a great friend,". Obama said of Biden at the 2015 White House Correspondent's Dinner. "We’ve gotten so close that in some places in Indiana, they won’t serve us pizza anymore."

This was a joking reference to an Indiana law that — until later amended by the state legislator — would have given private businesses the right to deny service to gay couples. (Incidentally, this bill was signed into law by none other than Pence, who was then Indiana's governor).

Make no mistake: Obama clearly has a deep, abiding affection for his former vice president.

Trump's feelings about Pence, on the other hand, aren't quite as clear. This is in part because the two men have only served together for less than two years, and thus haven't had nearly as much time to develop a rapport. Moreover, Trump generally doesn't talk about Pence at length in the way Obama did about Biden, so their personal relationship is a bit more of a mystery.

Still, Trump does talk about Pence on occasion, and although his comments are usually brief, he generally has nice things to say about his number two.

"Mike Pence is a great guy," Trump said of Pence at an August rally. In June, he called Pence "a wonderful human being and a great leader," and referred to him as "my friend" in a 2017 radio interview with WIBC. In many speeches, Trump has spoken of "our great vice president, Mike Pence."

However, Trump rarely talks about Pence at length; more often, he compliments him as a brief aside while discussing a larger topic, which was the case in all the aforementioned cases.

Behind closed doors, Trump has reportedly spoken of Pence in a slightly less reverential manner. The New Yorker reported that during the campaign, Trump would jokingly ask visitors, "Did Mike make you pray?" if they'd spoken with Pence beforehand. Two sources told the New Yorker that Trump has been dismissive of Pence's support for repealing Roe v. Wade, telling him at one meeting that "you've you've wasted all this time and energy on it and it’s not going to end abortion anyway." The New Yorker also reported that, during that same meeting, Trump made fun of Pence's anti-gay policy views.

“Don’t ask that guy — he wants to hang them all!," Trump said while motioning to Pence, according to the New Yorker, when the topic of gay rights came up.

Of course, nobody but Trump, Pence, Obama and Biden know for certain what their relationships are like. But Obama's quotes about Biden paint a pretty clear picture of how he feels. Trump's quotes about Pence, on the other hand, aren't nearly as clear — or numerous.