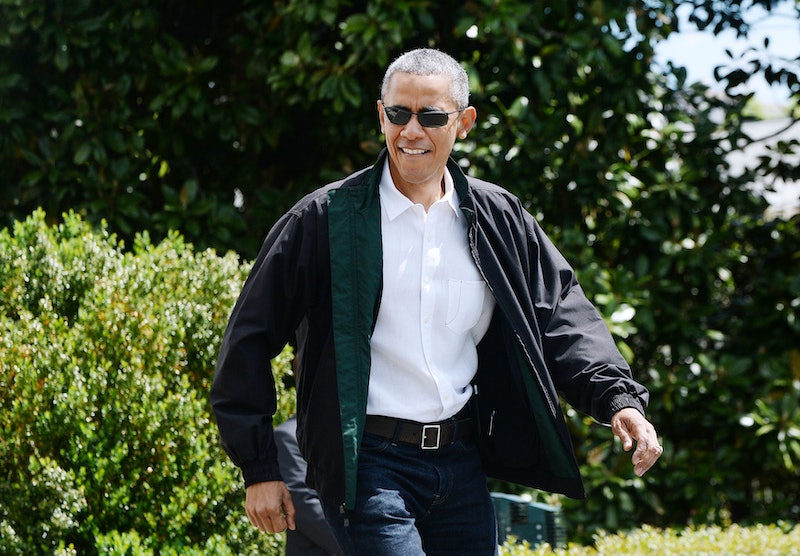 Donald Trump's administration so often feels like an elaborate joke being played on the American people, in part because it's already spawned so many actual jokes. From "alternative facts" to the "smaller is better" fallacy, Trump and his crew have given the country plenty to laugh/cringe about in these last eight weeks (only 200 left to go). The latest and most ridiculous meme of the Trump Era, #MicrowaveGate, has taken fierce hold over the national meme machine as another epic attack on Kellyanne Conway.

The whole ordeal started almost two weeks ago, when Trump first tweeted allegations that President Obama had wiretapped Trump Tower during the presidential campaign. His administration has since responded with various refutations that Trump didn't mean what he said. This Sunday, an interview Conway gave to her hometown newspaper, the Bergen County Record, went viral due to some of her assertions about the possibility and potential method of surveillance. When asked if she knew whether Trump Tower was wiretapped, Conway responded with this zinger:

“What I can say is there are many ways to surveil each other. There was an article this week that talked about how you can surveil someone through their phones, certainly through their television sets, any number of different ways. And microwaves that turn into cameras, et cetera. So we know that that is just a fact of modern life.”

To Conway's credit, there was news last week that revealed new details about how intelligence agencies can spy on American citizens through their internet-connected devices. A WikiLeaks dump revealed that the CIA can allegedly use your smart TVs and other household devices with internet capabilities to gather data (the White House did not respond to the leak).

However, nothing can "turn into" a camera if it doesn't already have a camera on it, and to my knowledge, there is not a single microwave available for sale in the U.S. that has a built-in camera.

Wired even abstracted the question in case Conway meant microwaves, as in very short wavelengths, instead of microwave ovens, and posed the question to a microwave imaging and radar expert, who promptly burst out laughing.

Regular microwave ovens definitively cannot be used to spy on people, but that didn't stop people in the slightest from running with the joke on social media. The #MicrowaveGate memes poured in from every corner of the internet.

At some point, people started including President Obama in the mix, wondering if they could could communicate with him via their microwaves and ask him to come back to the presidency.

Stephen Colbert kept it going with his Late Show monologue Monday night, in which he tried to climb inside a microwave to be reunited with Obama.

Another popular trope within the meme, variations on the stereotypical tinfoil hats worn by conspiracy theorists, seems to have originated from social media, but it's been referenced in several articles covering the story, including a Washington Post op-ed.

So this is a lot to process, but this is what it means to be politically informed in 2017, I guess.

Try not to get overwhelmed by the inanity of the whole thing. At least Conway doesn't seem to be convincing anyone of anything, so it's pretty harmless.

Keep focusing on the stuff that really matters.