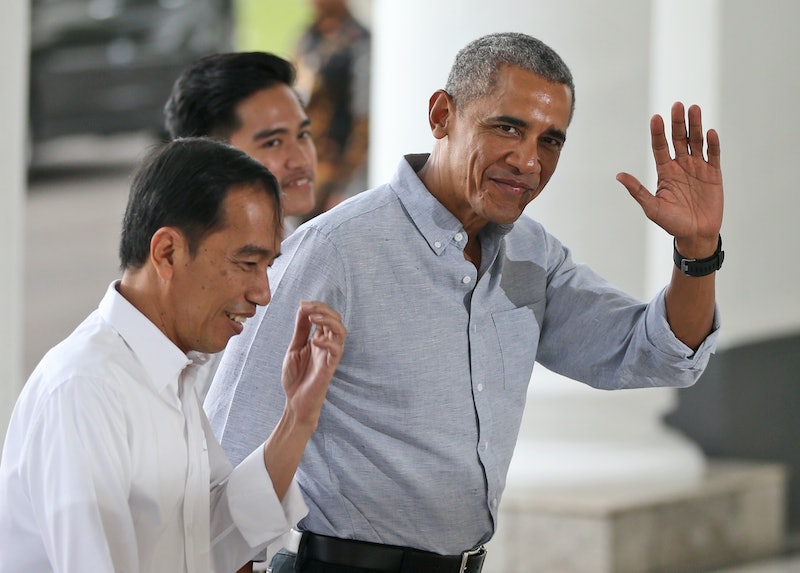 For the first time since leaving the Oval Office in January, Barack Obama will hold a fundraiser for the DNC later this month, according to an exclusive report by CNN published Friday. The event is set for Sept. 27 in Washington, where Obama will team up his former labor secretary and the current chairman of the DNC, Tom Perez. The focus of the event will be the ongoing governor's race in Virginia, along with state parties.

Obama's appearance at the event is meant to invigorate the DNC's lagging fundraising totals, which have struggled to keep pace under the new administration despite an overall resurgence of left-wing political activism, according to CNN. FEC filings from July show that the national party raised only $3.8 million that month, the worst on record since January 2009 when Obama was inaugurated. CNN also reported that the RNC has nearly eight times as much cash on hand as its Democratic counterpart, and collected twice as much in donations in July.

Though absent from the political fundraising scene, Obama has been significantly involved in philanthropy since the end of his presidency. Most recently, he's teamed up with all the living former presidents to create the One America Appeal, a relief organization for Hurricane Harvey. (With Irma short behind and headed for Florida this weekend, that work may take on an even larger scope.) The former president is also working to establish the Obama Foundation and Obama Presidential Center on the South Side of Chicago, which will serve primarily as a community outreach center.

Obama's continuing role in Democratic politics has proven a challenge for the party as it has tried to move forward from the loss of the 2016 presidential election. In April, former White House deputy chief of staff for operations Alyssa Mastromonaco said that she thinks Obama is "probably still the leader of the Democratic Party," and that's he's just "sort of on a hiatus right now." Party leadership hasn't done a very convincing job of trying to change that impression — no Obama replacement has been offered to the American people as a rallying point, and Bernie Sanders, the Independent, is still one of the leading candidates for the 2020 Democratic presidential nomination. Obama's return to Washington for this fundraiser highlights just how shallow the Democrats' bench really is, and another of their priorities for upcoming elections: to find candidates that actually inspire the American people.

Of course, the motivation for Obama's appearance at the fundraiser could be all his own, as well. He's taken much of the year off to vacation with his family in Indonesia, move his daughter into college, go yachting with Richard Branson, and write a memoir at Marlon Brando's exclusive Polynesian eco-resort (which is technically work, but barely counts because of the insane amount that he's getting paid for it). It's unlikely that one gets to be president of the United States without a deep love of hard work, so Obama may just want to get back into the political fray of his own accord. After all, he's only 56 years old, which is pretty young to be satisfied with retirement. If that's the case, it's a win-win for Democrats — Obama puts in more time and effort on behalf of the party without looking like the guy who graduated high school but still hangs around.

The question as to whether this appeal works for the DNC will remain until after the fundraiser. Obama still carries a lot of clout for most of the liberal base and he may be able to secure the funds needed to help Democrats dominate this election cycle. But if he can't, it doesn't seem like the DNC or the party at large knows who can.