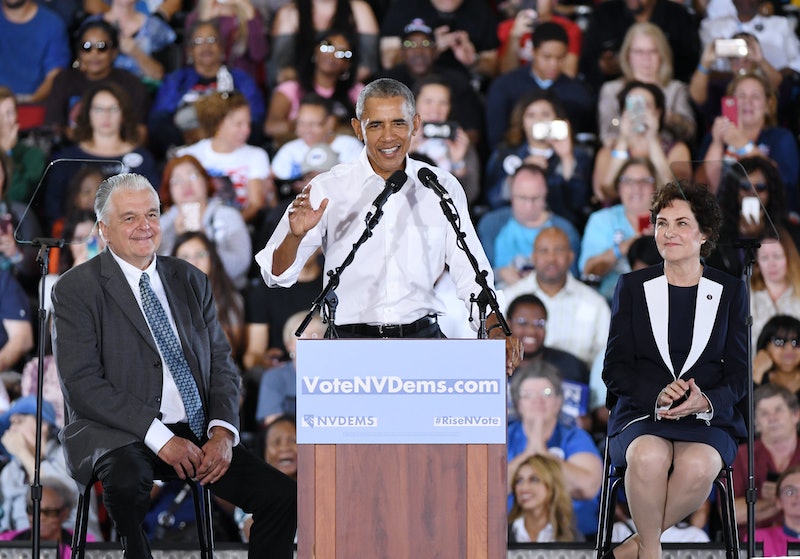 While stumping for Democrats in Nevada on Monday, former President Barack Obama took several subtle swipes at the current administration. Without naming names, Obama's Las Vegas rally speech about voting included digs at President Trump and highlighted what he described as importance of telling the truth.

Obama's speech then addressed last December's monumental tax bill, which, among other things, slashed tax rates for corporations. "So here’s what’s true," Obama said. "They handed out $1.5 trillion in tax cuts aimed at billionaires and corporations. You know what, it was not done for you."

The shade Obama threw was twofold: It referred to President Trump's penchant for making false statements, and specifically pointed to his tax bill, which Trump claimed would benefit the common American. Experts have widely disagreed over whether this is true, though most agree that it did, by and large, benefit some of the country's most wealthy individuals.

Obama's comments about facts and the truth evoke comments made by both Trump and his surrogates. Presidential adviser Kellyanne Conway, for example, famously thrust the term "alternative facts" into mainstream vernacular during a January 2017 interview on Meet the Press. At the time, she was defending then-Press Secretary Sean Spicer's false claims about the number of people who attended Trump's inauguration.

Sometimes President Trump makes and repeats exaggerations, like when he repeatedly said that the United States pays up to 90 percent of NATO's costs. Fact-checkers at The Washington Post and The New York Times classified such claims as incorrect and misleading.

Other times, Trump has made claims without presenting any evidence to back them up. This happened on Monday, for example, when he tweeted that "unknown Middle Easterners are mixed in" with a migrant caravan currently en route to the southern U.S. border. News analysts were unable to immediately determine where such a claim came from. Some questioned whether he had pulled the idea from comments made on Fox & Friends earlier in the day. Still, he tweeted his claim declaratively, as though it were true, declaring the caravan's travels to be a "national emergency."

Trump has also upset norms surrounding how Americans determine what is or isn't true by popularizing the term "fake news." Depending on the conversation, "fake news" might be legitimately fake news articles created by fake news organizations for the purpose of spreading propaganda on social media — or it might simply be a news story that a reader, such as the president, doesn't like or agree with.

Trump's incorrect or exaggerated statements have been a topic of conversation since he first took to the campaign trail for the 2016 election, and little has apparently changed. What is different, however, is Obama explicitly pointing these falsehoods out, suggesting just how important he believes the midterm elections to be.